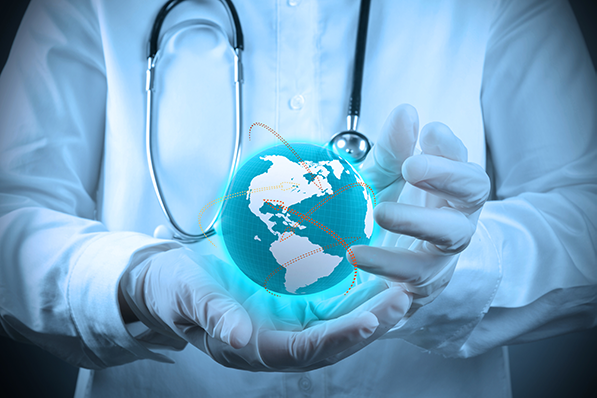 The coronavirus is spreading and for the first time in history virtually all people on earth are faced with the same, imminent common threat. With multifold stories of individual suffering and an unprecedented global lockdown, there is an intensifying call for an internationally coordinated response; it is in every country’s interest to think and act globally.

The question arises whether global threats like the coronavirus are isolated phenomena or whether they are part of a deeper problem associated with the way we work and live? Regarding the current crisis, there are indeed indications that the pandemic has not simply fallen from the sky but can be associated with the loss of natural habitat, which opens more pathways for animal microbes to adapt to the human body. Environmental stress seems to be a common feature associated with our economic system.

Therefore, we can be certain that this will not be the last global crisis - with other pandemics looming, climate change accelerating, and biodiversity vanishing; not to speak about local and regional crises such as expanding bushfires and the current locust invasion in East Africa. Just as with coronavirus – there are several other, potentially more disastrous “curves” that ought to be “flattened” – in and beyond our lifetime.

Another important question is to what degree and in what way this crisis will change our societies. It would not be the first time that a crisis triggered larger reforms in the national and international economic order. For example, after the 1929 crisis countries and states began to pump-prime growth by Keynesian demand policies, thus injecting equity into their economies. After World War II a new international order was established with the creation of the United Nations, the International Monetary Fund, and the World Bank in order to overcome the policy fragmentation of the 1930s. Never let a crisis go to waste! As Stephane Hallegatte and Stephan Hammer from the World Bank put it: “If we get it right, the response to COVID-19 may not only minimize pain and suffering now, but can also build the foundations for a greener, safer, and more prosperous future.”

Crises draw societies deeper into trouble in the short term; but they also offer the chance for major structural reforms in the longer term. What might some of the broader lessons of this crisis be? What are the learning points? I would single out five general issues:

What we can see this time round is that OECD Governments reacted swiftly in putting in place large fiscal and monetary packages. To what extent those responses are coordinated internationally, or at least complementary, is still to be seen. Early indications point to worrisome trends of “beggar thy neighbor” policies – either by restricting exports of medical supplies or non-coordinated fiscal and monetary responses. In that respect, the Spring Meetings of the World Bank and the IMF this week will be an important test for global coordination.

The World Bank Group has already prepared a package of support and is inviting other donors to co-finance activities to achieve a massive international coordinated and proven intervention (instead of small donor-driven, potentially non-replicable stand-alone projects). The first line of defense – in close coordination with WHO and other UN agencies – is anchored around supporting the health sector and social security systems. This encompasses conditional cash programs (including, hopefully, for environmental restoration) and undertaking “dual use” investments that support the wider health and social systems and thus strengthen resilience to future shocks, including natural disasters.

The second line of defense will be focused on helping economic stabilization – providing fiscal support to the government budgets and broadening social security transfers in developing countries to ensure their ability to react to the crisis. This should include a focus on sustainable investments and targeted tax breaks. It is likely that with debt vulnerabilities, sudden stops on capital markets and lengthy contractions of economies in emerging and developing markets, substantial fiscal transfers will be necessary to not regress on the developmental gains over the past decades. It is not clear yet how deep the impact of COVID-19 will be on developing countries’ economies. But – as IMF Managing Director Kristalina Georgieva put it – we should be prepared for the worst scenarios.

The third line of defense aims at supporting the broader economy in developing countries, because the private sector is key in helping to address the economic challenges resulting from the pandemic. During the crisis period, IFC is providing ad-hoc liquidity lines to sustain operations. Helping private sector companies to continue to operate is key to job preservation and to further limit the downside of demand retraction. To recover from the crisis, local economies need long-term loans to finance investments, incentives to invest, and knowledge about the new market conditions. IFC will finance these investments either directly or through the financial sector.

The current crisis underlines existing weaknesses and forces us to reflect on how to improve the multilateral architecture to reform institutions and fill gaps. With no ambition to be comprehensive, here are a few pragmatic proposals:

Generally, the multilateral institutions, such as the UN, the World Bank Group and the IMF, are too siloed from one another. Unlike in the security sector with the UN Security Council on top, there is no overarching international governance structure that deals with economic risks. This problem is not new. Several proposals to strengthen the global economic governance system have been made in the past, particularly in the context of the global financial crisis, e.g. from Germanys Chancellor Angela Merkel or from the UN’s so-called “Stiglitz Commission.” It is clear that these proposals are long shots. But there might be more modest steps towards strengthening global economic governance, e.g. to establish an “IPCC-like Panel” on global risks, with the aim to assess global trends, to identify global threats in time, and to suggest options for collective international action. This in line with the recent suggestion by Gerd Müller, Germany’s Federal Minister for Economic Cooperation and Development – to establish a World Crisis Committee under the leadership of the UN Secretary-General.

More specifically, the current system has limited incentives to invest in Global Public Goods (GPG) and crisis prevention. This also applies, of course, to the World Bank, which at 75 years of age would be part of the risk group in the current COVID-19 crisis. Of course, the Bank has always changed and adapted to new developments. Today more than ever, we need a bank that lives up to its name. One Bank for the whole world. And that is exactly how it must be set up. The Bank’s business model is based on country programs and demand from member countries. This is a big strength and should not be changed. However, when crises, as the current one, have spillover effects – the model of GPG, including crises prevention and reaction, gets challenged. Countries have limited interest to use scarce World Bank funds for GPG-related programs. And it is entirely rational from an individual’s country view not to factor the harms or benefits for the rest of the international community into at least their immediate and short-term decisions.

To pursue GPGs more efficiently, therefore, the production of GPGs must be incentivized for borrowing countries, e.g. in the form of additional funds or better concessional terms. It is no surprise that the lion’s share of GPG- and crises-related funds mobilized by the World Bank does not originate from the World Bank’s own resources, but rather from donor-financed Trust Funds. There are different options to overcome this deficiency by adjusting the World Bank’s business model. One would be to build on the existing Crises Response Window of its International Development Association (IDA). It could be established as a stand-alone Fund, open to all borrower countries, with its own allocation mechanisms and financing terms, and with an adaptation of the governance structure. For example, it could possibly also be open for additional donors, such as philanthropic institutions, or the European Commission. This new window could be merged with the “Global Public Goods Window” which has been recently established in the context of the Bank’s capital increase and which is financed by internal resources (net income).

Besides, the efficiency of crisis reaction very much depends on to what extent the many individual support measures are following a coherent and consistent approach. The international “aid system” is already quite fragmented. Time pressure due to the need for a quick reaction most probably undercuts a coherent and efficient response. With that backdrop, multilateral institutions, in particular the World Bank Group, must play a strong role helping to align all support behind joint approaches and priorities. They bear the convening power to identifying priority interventions (on the basis of needs assessments by WHO in the case of the current crisis); to organizing bulk procurement; and to suggesting concrete programs, which can serve as platforms open for co-financing by other donors. Other donors should then be ready to join in and to align their own support.

Finally, as illegal wildlife trade acts as large conveyor belts for pathogens, it is paramount to work on a swift ban of all wildlife trade for consumption as part of a longer-term response to this and possible future pandemics. Reversing the trend towards a loss of biodiversity and the loss of natural habitats should already be at the top of the global agenda, and the forthcoming UN Biodiversity Conference – unfortunately postponed until further notice – will provide an important opportunity in that respect.

Jürgen Zattler is the World Bank Group Executive Director representing Germany since May 2017. The statements made in this article reflect the author’s personal view. In response to the coronavirus pandemic, CGD will occasionally invite independent voices onto its blog to share perspective, analysis, or research.