The long-anticipated rebasing of Nigeria’s GDP series was finally made public on Sunday April 6, and the general media reaction has been cautiously celebratory. But the reaction has largely missed one big point: the rebasing establishes that the biggest economy in Africa has the lowest tax revenues of almost any country in the world.

Headlines have focused on the country’s GDP ‘nearly doubling’ (Financial Times), or Nigeria becoming ‘the biggest economy in Africa’ (AFP). There has been a great deal of enthusiasm about the implications for Nigeria’s attractiveness to foreign investment. A range of evidence is offered in support of this view.

Much about the rebasing is good news

All of this is undoubtedly good news, to the extent that they it is news rather than statistics simply catching up with reality (the first three points made by Todd Moss on Ghana’s rebasing in 2010 all stand, I think). The note of caution in all reporting — typically in the final paragraphs — has stemmed from the necessary reference to reality, noting that nothing has changed in terms of people’s actual incomes, or costs of living. (This BBC story is an emblematic example: under the headline ‘Nigeria becomes Africa’s biggest economy’ and after a few paragraphs on the statistics, you find the sub-heading, taken from a quote: ‘Changes nothing’!)

In addition, reporting has welcomed the long overdue rebasing itself. This, the process of statistics catching up with reality, certainly is good news. Since the previous series was based on the structure of the economy in 1990, a jump to 2010 is a great improvement. Given the international recommendation of rebasing every four years, the new series is arguably somewhat dated already; so the commitment to rebase again in 2016 is also important. Transparency about the process of rebasing, and the material now published, is also very welcome.

While there is at the least some kind of feel-good factor from the new numbers — perhaps most of all for those who live outside the country — there is a striking feel-bad issue: tax.

Some quick background on the four Rs of tax. Tax doesn’t only provide revenues, although these are clearly important for providing basic public services, infrastructure, and the institutional capacity for an effective state among other things. But it’s not just the money that matters, it’s also where it comes from: tax delivers much that resource revenues and aid cannot. Tax is the way we re-price goods and services (e.g., making public bads like smoking or pollution more expensive); is a central element in redistribution to reduce inequality; and, perhaps most important of all, is the basis for public representation.

In Nigeria’s case, there are longstanding concerns over the reliance on oil and gas revenues, and on the low level of tax revenues in particular. A range of research now provides support for the hypothesis that greater reliance on non-tax revenues weakens state-citizen relations, undermining standards of governance and institutions, and exacerbating corruption. Here’s the picture, using data released in March from the country’s IMF consultation.

Figure 1: Nigeria's revenues, % of GDP before rebasing: Just about ok?

Not too bad, you might think? Yes, non–oil and gas revenues at 6–7% of GDP are a bit of concern; and the downward trend overall is a worry. But revenues of 20% of GDP don’t compare all that badly in the region, or at this income level.

(NB: To obtain these statistics I combine the IMF consultation data with data on the percentage impact of rebasing.)

What are the dangers of such low revenue?

The rough rule of thumb used by the IMF and others,  which Cotarelli’s (2011) IMF paper (oddly no longer available?) traces back to 1963 and the great Cambridge economist Nicholas Kaldor,   is that a tax-to-GDP level below 15% is a danger sign. Below such a level of overall revenues, a state will struggle to function; and I would add, below such a level of tax revenues in particular, there is a serious threat to effective political representation and good governance, and so both to the ability of government to challenge poverty and inequality, and the likelihood of it happening.

On this basis, Nigeria’s rebasing reveals two serious issues. First, that despite massive resource wealth Nigeria has been failing in most recent years to reach even the 15% minimum in total revenues. And second, that the non–oil and gas share of revenues has been almost unbelievably low.

Table: Nigeria’s revenue, % of GDP (before and after rebasing)

Looking at (admittedly far from perfect) World Bank data on tax, we find only four other countries in the last ten years which ever had such a low tax revenue: the oil states of Bahrain, Kuwait, and Oman (which together total less than 5% of Nigeria’s population); and, in 2004 only, Myanmar.

For one of the most populous countries in the world to be in this company should be of grave concern. It is no coincidence that Nigeria is also one of the only countries where more than one in ten children die before their fifth birthday. It also has, according to UNICEF, has bucked the trend of MDG progress to show a substantial deterioration from 2007–2011.

Nigeria’s GDP rebasing is worthy of celebration because it reveals more of the true picture. But the picture is certainly not one to celebrate. Instead, it reveals the depth of state weakness. Can that be enough to drive change?

A final thought: while there are clearly major political issues to address, policymakers could do worse than start with some basics in respect of transparency and the behaviour of the tax authority itself, as this figure compiled from Afrobarometer data shows.

Figure 3: Nigeria's government seen as opaque, and tax officials as most corrupt of 29 African countries 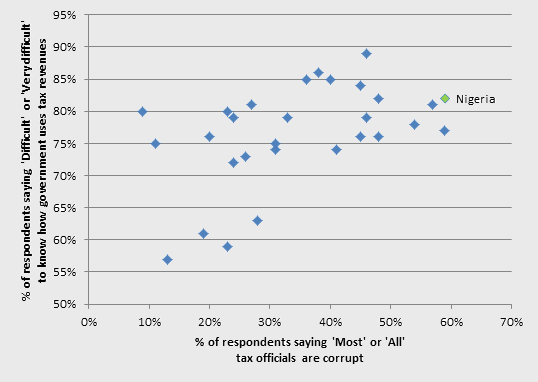 I’m grateful to Razia Khan (@raziakkhan) for kicking around some of these ideas as she was live-tweeting the announcement.