Organize the World Bank Like a University, Not a Consulting Firm

In response to our August 5 blog criticizing the World Bank’s current reorganization plans, a few readers wrote to ask us if we could come up with a better idea. This is a daunting challenge. We’ve heard that the Bank has spent millions over more than a year to generate more than 40 ideas about how to tweak the Bank’s organization and has intensively discussed three overarching ideas, for none of which we have actually seen a background paper – or even a PowerPoint.  So with brains unfettered by facts, uncluttered by concept papers, bereft of briefings and emboldened by ignorance, here goes… 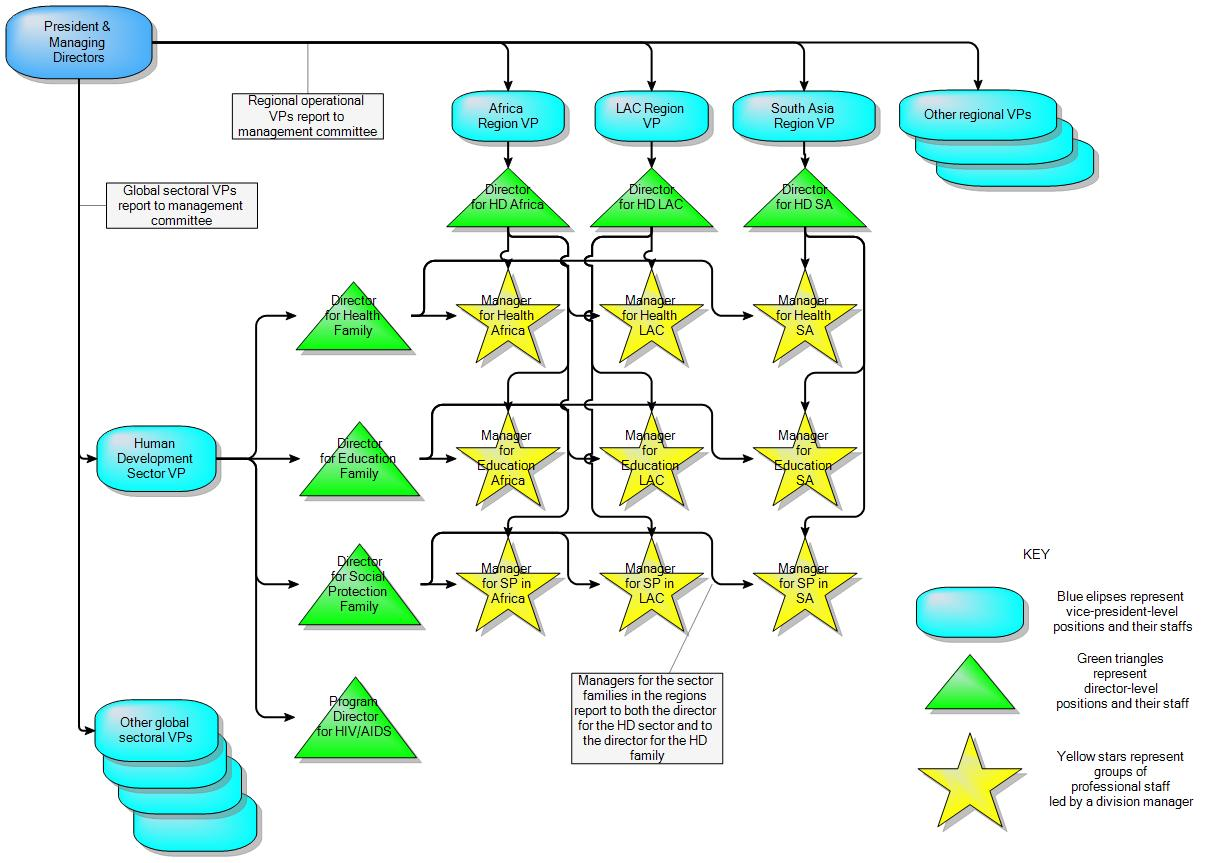 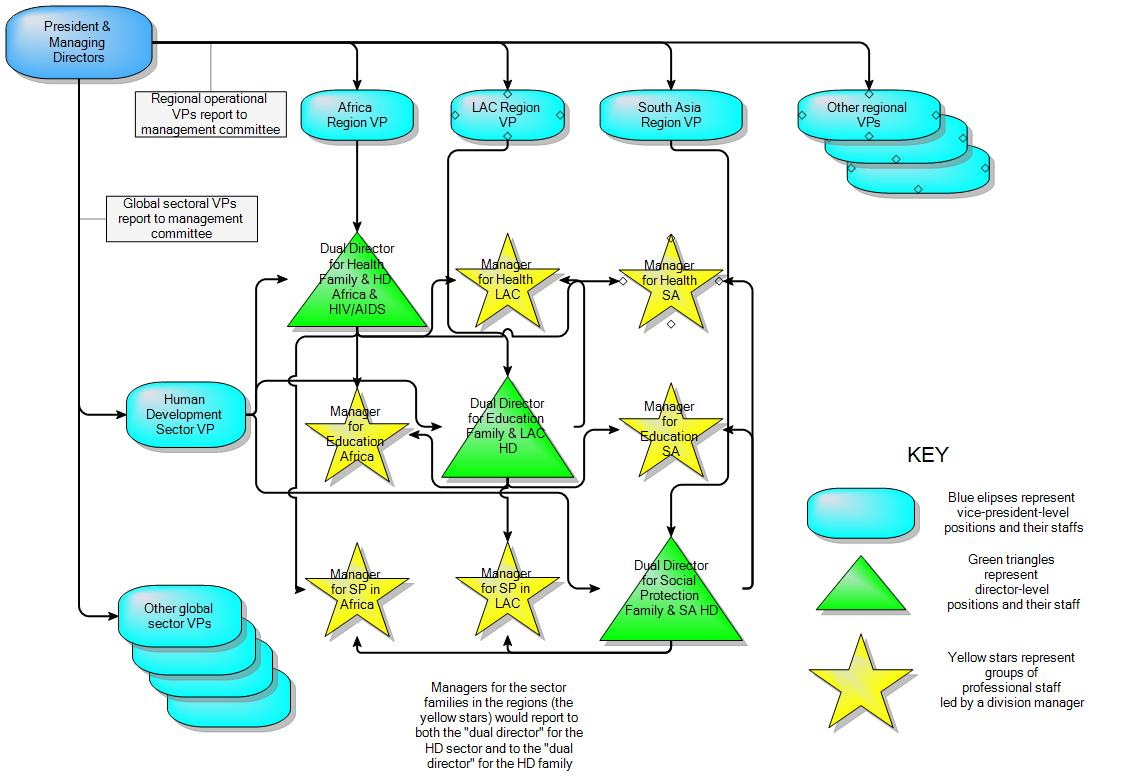 These figures are the authors' simplified and stylized depictions. See the attached PDF for larger versions and a fuller explanation.

We argued in our previous blog that the proposed organization would subvert the Bank’s stated ambition to enhance the quality of its operations in areas of global knowledge and practice related to global public goods and poverty reduction. The proposal to embed the Bank’s global practice leaders within the matrix structure of its organization, subordinating them to the regional vice-presidents, would serve the short run objective of increased lending, we agree.  But we believe the proposed changes would make the World Bank look like the result of a hypothetical merger between McKinsey and Chase Manhattan. What would be the point of that? The taxpayers of the rich countries currently subsidize World Bank lending.  Would they subsidize a merger of Chase and McKinsey? No. For one thing such a subsidized entity would unfairly compete with legitimate private sector consulting firms and banks, from which borrowing countries can already obtain consulting and banking services directly.

Of course private lending and consulting markets only provide goods and services for which the clients are prepared to bear the full costs. The “knowledge” that entities such as private consulting firms and banks have an interest in managing is notoriously derivative, myopically focused on short-run profits and also privately hoarded.

By steadily increasing their extra-budgetary grants to the World Bank, rich countries and donors have manifested their willingness to support something else: knowledge in the form of deeper understanding of the social mechanisms of economic growth and development, knowledge that will be generously shared for the long-term interest of not only the individual borrowing country, but the world at large. So if we were charged with reorganizing the World Bank, we would use this opportunity to differentiate the World Bank as much as possible from the hypothetical merger of McKinsey and Chase.  We would design the Bank’s organizational structure to strengthen the roles of the global practice leaders and we would support their stronger roles by channeling through them the resources that are currently managed by the Bank’s trust fund division.

We asked ourselves, “What position description would enable the World Bank to compete for the highest caliber individuals to fill the Bank’s global leadership positions?” We note that in areas of expertise relevant to Bank operations the most highly respected global opinion leaders are found at the highest ranks within knowledge-based institutions like universities, research institutes, and information and network based creative start-ups. What position description at the World Bank might attract a person who would otherwise be dean of a school of education or of public health or of engineering or of management?

Can you imagine such an individual being willing to be embedded in the Bank’s structure (in the green triangles on the diagonal of Figure 2) and thus reporting to a regional vice-president mainly concerned with pushing loans, who reports to a managing director, who in turn reports to the World Bank’s president?  Because these proposed positions would combine the functions of the global practice leader with those of the current regional sectoral directors who report to the regional vice-presidents, these recruits would also be responsible for selling the time of their professional staff to the Bank’s country directors in that region. Can you imagine a person who could instead be a university dean or the strategic vice-president for a silicon valley start-up who is willing to broker the time of individual staff members to the country directors?  Good luck with that.

Even the current organization of the Bank is insufficiently attractive to the people the Bank needs to recruit as global practice leaders. People of this caliber have specialized expertise and international networks of colleagues who share that expertise.  They would not want the job of sector vice-president, where they must manage a motley collection of disciplines that the Bank grouped together for managerial convenience.  For example, the currently unfilled position of Vice-President for Human Development must manage world class experts in the specialized and distinct fields of health, education and social-protection (see Figure 1). And the vice-president for sustainable development must manage an even more diversified collection of experts in agriculture, infrastructure and the environment.  In the current organization, the jobs with the requisite focus to attract a world class maven are pushed down to the level of director in the Bank’s hierarchy. We believe that anything less than a vice-president level appointment will fail to compete with the alternatives available to these global leaders.

So we propose flattening the current management structure of the Bank’s global expertise and leadership by elevating the current global network directors from director-level to vice-presidency-level positions. (Full disclosure: one of us has been a World Bank director and the other is married to one who has announced her impending departure from the Bank. The opinions expressed here are those of the authors alone.) We would provide these leaders not only with greater prestige and proximity to the World Bank’s president, but also with an enhanced operational budget (See figure 3 and attached PDF). We propose reallocating a portion of the World Bank’s administrative budget towards the kinds of global initiatives that these individuals would lead. 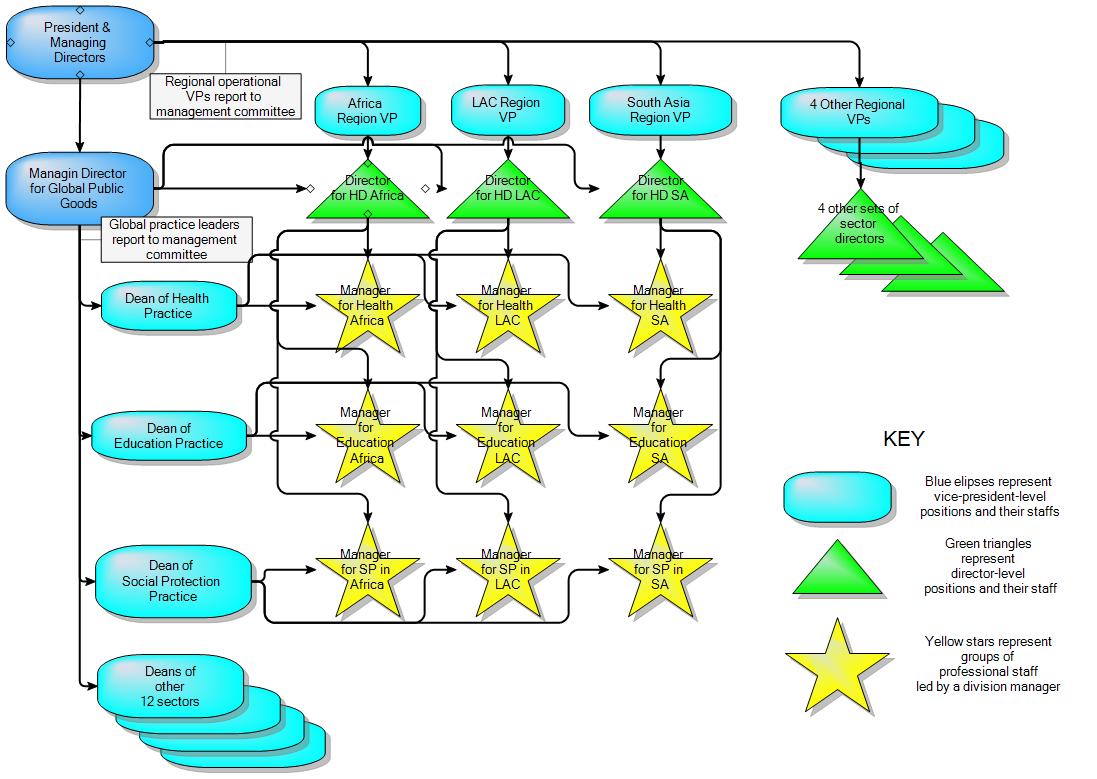 Figure 3. Our proposed reorganization of the World Bank. (Source: a few beers and a napkin)*

*Like figures 1 and 2, this figure is the authors’ simplified and stylized depiction. See the attached PDF for a fuller explanation.

And we propose granting these knowledge leaders a new title. We don’t like “global practice leader”. Ugh. Who would want that title, which is both pretentious and empty?  We propose that these world class experts, leaders of their disciplines, visionaries all, be given the title “Dean”. According to the Merriam-Webster dictionary, the word “dean” is a synonym for “doyen/doyenne”, a word that means “a person considered to be knowledgeable or uniquely skilled as a result of long experience in some field of endeavor. “

Rather like academic Deanships or the current arrangement for the Chief Economist, which has been successful in attracting some very prominent individuals, appointment to the position of Dean could normally be on a fixed term basis, in this case around 5 years.

To remain relevant in the 21st century, we believe the World Bank will succeed if and only if it remakes itself to look more like a new kind of university that subsidizes wisely designed and globally beneficial investments in growth, poverty reduction and the knowledge they require – and less like a commercial bank that markets its loans with a fleet of slick tax-payer subsidized consultants.

*The attached PDF explains our understanding of the current organization, the recently proposed reorganization and our own proposed alternative in greater detail.