Perhaps not so GREAT (Britain)? | Center for Global Development | Ideas to Action Skip to main content

Perhaps not so GREAT (Britain)?

GREAT Britain is a slogan increasingly visible around the world – it is the hallmark of the UK government’s international campaign which features the best Great Britain has to offer and aims to present the country as a global leader in business, innovation, culture and so on. In terms of development, Great Britain (the country not the slogan) can take pride: it is the only G20 country to live up to its commitment to provide 0.7% of national income for development assistance. It is indeed a GREAT achievement, which demonstrates strong political commitment, and other European and OECD countries should follow suit. But one should not forget that development policy is about more than aid, and other, “beyond aid” policies, such as trade, finance, migration and security are equally (and conceivably more) important for enabling development abroad and global prosperity (as we show with our Commitment to Development Index).

Last week we wondered how GREAT the UK’s commitment to international development is, as London hosted the world’s biggest arms fair – DSEI (Defence and Security Equipment International). The event was supported by several UK Ministries, including Defense, and Trade and Investment, and others.

The Guardian pointed out that among those officially invited were the governments of Saudi Arabia, Egypt, Azerbaijan, and Bahrain. Coincidentally, these countries are also featured in UK FCO’s Human Rights and Democracy 2014 report for their not so GREAT human rights record.

In fact, over the last several years the government Committees on Arms Control have been continuously pointing out that the UK’s arms exports are often directed to countries of concern for human rights abuses and the Committees concluded that “the Government should apply significantly more cautious judgments when considering arms export license applications for goods to authoritarian regimes which might be used to facilitate internal repression” (Scrutiny on Arms Exports, 2013).

Amnesty International explains in this short cartoon advert that the arms fair is not only about national security as one might think, and visitors have access to torture equipment, killer drones and other GREAT “security” tools. With that in mind it’s not hard to see why British arms sales could undermine secure and peaceful livelihoods of people in other countries.

In this light, the #StopDSEI campaign launched by a group of artists was a welcome attempt to attract public attention to the UK’s arms export policy. Last week London commuters might have seen satirical posters like the one below, which aimed to inform the public that selling arms to undemocratic governments abroad is not at all GREAT. 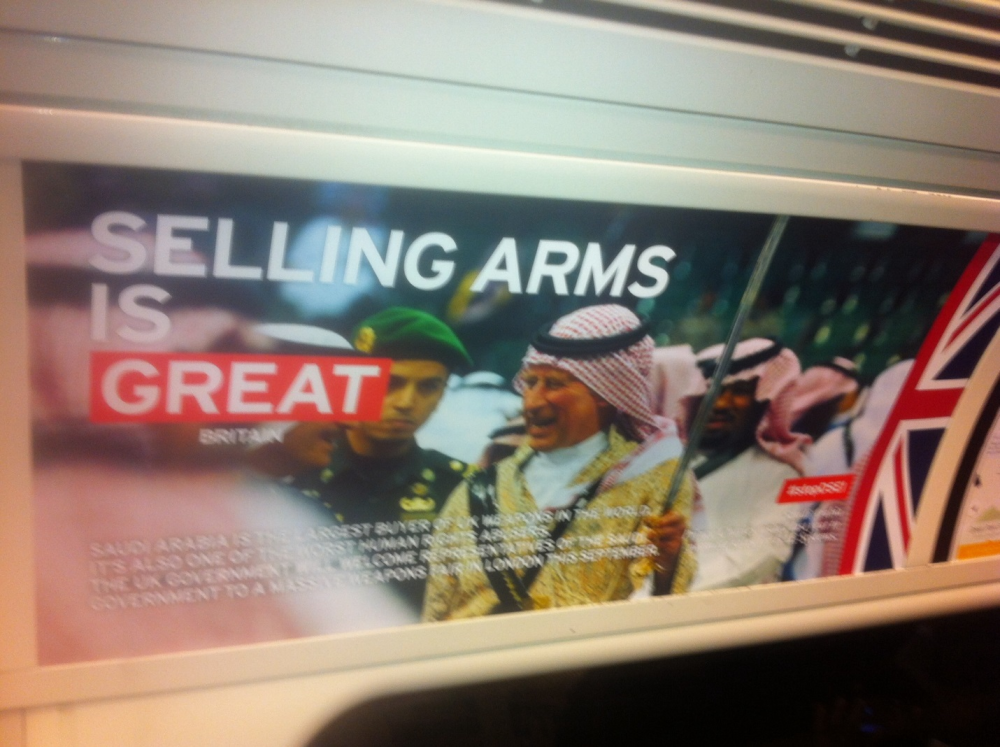 Text on the poster: “Saudi Arabia is the largest buyer of UK weapons in the world. It’s also one of the worst human rights abusers. The UK government will welcome representatives of the Saudi government to a massive weapons fair in London this September.”; “Saudi Arabia, Prince Charles visited last year to promote sales for BAE Systems.”

But the UK is not the only country which keeps exporting arms to authoritarian regimes. In our recent report with the Elcano Royal Institute we show that the Czech Republic, France, Netherlands and Sweden also have a record of supporting undemocratic regimes. Even though European countries have (voluntarily) adopted a Code of Conduct on Arms Exports which should in theory limit arms exports to such recipients, the report concludes that “in practice, license awards are decided by each Member State, which can lead to different interpretations around potential consequences in the supply of arms to non-democratic countries”.

Additionally, the recent UN Register of Conventional Arms report published only a few days ago, also raised some questions on the UK’s reporting as many important transfers to countries such as Saudi Arabia and Oman are not officially reported (more details in a comprehensive comment by SIPRI).

Arms exports to poor and undemocratic countries is one area where the UK continuously falls short in the Commitment to Development Index (CDI): it has consistently been ranking in the bottom 6th, behind the above mentioned European countries, and the United States. The CDI is a measure of how development-friendly a country’s policies are across a range of areas (aid, trade, finance, migration, security, technology and climate) and it includes hundreds of metrics (including arms sales). This year’s CDI will be published later this year so make sure to come back to check how the UK’s (and other countries’) arms exports affected their overall rankings.

It would be GREAT to know how the UK evaluates its policy coherence for development from this perspective, but unfortunately, its recent self-assessment report which most EU countries submitted to the European Commission does not seem to be available. That’s not GREAT.