Policies, Outcomes, and Populism: The Integration of Migrants in Sweden

Two months after the general elections, Swedish voters still wait for a new government to be formed as neither of the established parties reached a qualified majority. Sweden doesn’t seem to be immune to the Europe-wide trend of hostility to migration, as a significant 17.5 percent of the vote went to the Sweden Democrats, a populist, anti-immigration party. This is even more surprising given Sweden’s reputation for openness and successful integration, a perception supported by data; the country tops both this year’s Commitment to Development Index (CDI) and its migration component. So is the CDI wrong?

Sweden is a leader on integration efforts

During the major influx of migrants to Europe in 2015, Sweden took in more refugees and asylum seekers per capita than any other country, for which it is rewarded in the CDI. Sweden also has the best integration policies according to the Migration Integration Policy Index (MIPEX), a cross-country index that benchmarks policies against the highest standards. Sweden performs particularly well on labour market mobility, where the scoring framework includes criteria such as access to the labour market and general government support and vocational training—reflecting government’s policy efforts. However, successful integration does not stop at policy efforts; outcomes are a separate sphere and the metrics there show a less rosy picture.

Labour market mobility: the crucial distinction between efforts and outputs

Employment is one of the most critical areas of integration, and despite the exceptional labour market mobility policies as measured by MIPEX, the foreign born fare considerably worse in the job market than native-born Swedes. They have also been hit worse and have recovered less quickly from the global crisis of 2008 than native-born Swedes. 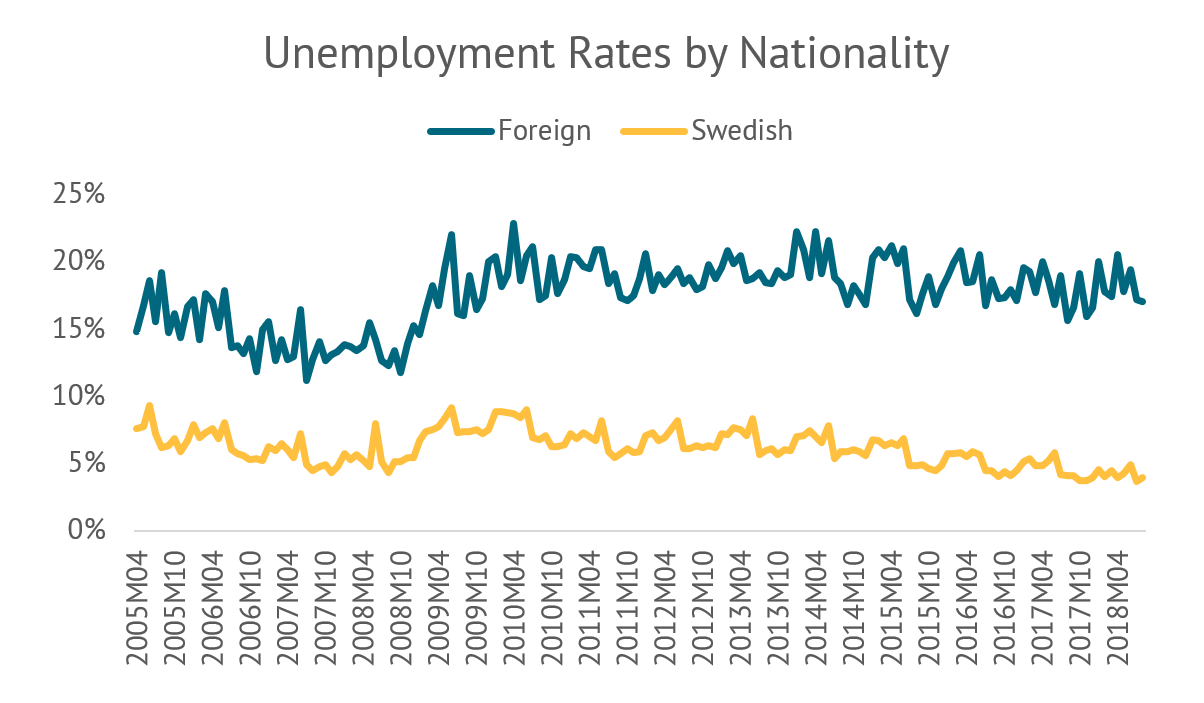 This is not a new problem. For refugees in particular, official data show that just 30 percent of those that arrived in 1997–1999 had a job after two years in Sweden. After 10 years the figure was just 65 percent. The unemployment rate among the lower-educated migrants is over 20 percent higher than that for the equivalently educated native born. These outcomes reveal that there are factors beyond policy efforts that affect integration outcomes. For example, collective union bargaining may price migrants out of the market and qualified migrants also face difficulties in having their qualifications recognised.

There are other factors, not easily affected by policy efforts, that affect integration outcomes. These also differ between types of migrants. Data show that across the EU, refugees integrate more slowly than labour migrants, being 11.6 percent less likely to have a job and 22.1 percent more likely to be unemployed than other migrants with similar characteristics. This is unsurprising given that labour migrants are directly responding to labour demand conditions while most refugees’ arrivals are determined by events like wars and humanitarian crises. Since 1970, the majority of immigrants into Sweden have been refugees.

Refugees do fare better in Sweden than in the EU generally but their arrivals still present labour market challenges because refugees tend to be have lower education and skill levels, and therefore increase the low-skilled labour supply. Sweden is a highly skilled economy and the low-skill segment of its labour market represents just 5 percent of total jobs, so immigrants compete in a small and crowded space; perhaps connected to this, the Sweden Democrats disproportionately attract voters who are lower income and lower educated. Since 2012, however, the largest share of refugees has been Syrians, who tend to be higher educated. Assimilating their skills and avoiding “brain waste” will be a growing integration challenge for Swedish agencies.

Refugees tend to catch up with labour migrants over time, but Åslund and Rooth found that labour market conditions on arrival can have a substantial impact on earnings and employment prospects for potentially more than a decade. In Sweden a surge of refugees coincided with a recession in the early 1990s in which unemployment soared (see chart below). Employment levels have since stabilised, but Åslund and Rooth’s findings imply that employment conditions for many of the refugee population may not have dovetailed with this recovery. This theory would help to explain economic stagnation in many immigrant communities that has formed over decades and has resulted in intergenerational poverty. 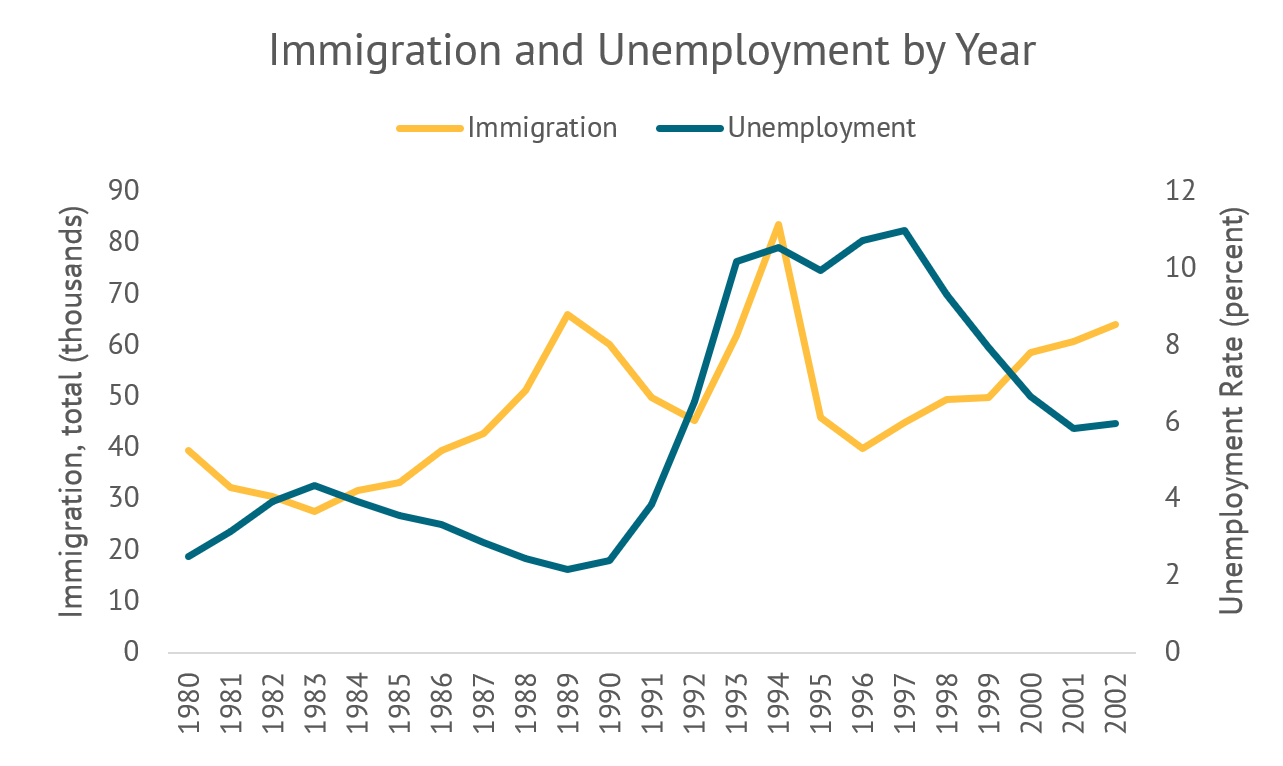 In 2010, the Swedish government responded to integration challenges with intensified efforts, including a two-year introduction programme for young migrants with a strong labour market focus, including language training, subsidised employment and education, and better recognition of credentials. These efforts are reflected in MIPEX’s ratings of 2015, giving Sweden the best score on labour market mobility. However, early signs are not promising: a 2016 OECD study estimates just 39 percent of men and 26 percent of women are in work or study one year after completing the programme.

Swedish perceptions on migration and integration

In early 2018, 73 percent of Swedes surveyed by Eurobarometer think that integration has been unsuccessful, 61 percent think immigrants worsen crime problems, and 58 percent think they are a burden on the welfare system. It is these last two concerns that the Sweden Democrats seem to have spoken to, as their political message includes maligning refugees as threatening the welfare system and driving crime. While thinking it an important issue, however, Swedes are still overwhelmingly supportive of immigration and integration: 91 percent of Swedes surveyed by Eurobarometer think that fostering integration is necessary for the long-term future of Sweden, and 76 percent of have a total positive perception of immigrants. Swedes’ concerns in this light seem to relate to immigration’s practical challenges rather than to be driven by anti-immigrant sentiments.

The need for outcome measures

Even the most responsive and well-intentioned of policy efforts, like the 2010 programme, can face difficulties because, as we have seen, integration is affected by a variety of factors that go beyond policy efforts captured by indices such as the CDI or MIPEX.

There are good reasons why indices tend to focus on outputs, not outcomes. Though policy outputs are readily measurable and comparable across countries, measuring outcomes is difficult. First, this is a resource-intensive endeavour, relying on primary data collection from broad locations. Second, it can be methodologically difficult, particularly if seeking to isolate the effect of policies, which occur amidst other causal factors. Third, causally measuring outcomes is hampered by the lack of counterfactuals (i.e., what would have occurred without the policy).

A further problem is data timing. Even relatively easy-to-construct policy measures are lagging. MIPEX is the most up to date of the publicly available indexes and its most recent issue was published in 2015 and relates to 2014 data. Outcome data are even less up to date. Most available datasets predate the 2010 integration reforms and policies can take years to be reflected in outcomes.

In such contested fields as immigration and integration, the mentioned challenges may seem all the greater. But to avoid the brain waste of underemployed, skilled migrants; to effectively mobilise migration as a developmental force; to allay the concerns of those persuaded by far-right rhetoric; and to aid governments in judging the effectiveness of policies to achieve the best outcomes for their labour market and economy, policymakers should invest in equipping themselves with up-to-date tools to effectively link policy outputs to integration outcomes.

Blog Post
Gender and the CDI: How Committed Are Countries to Gender...
Beata Cichocka and Ian Mitchell

Blog Post
How Robust Is the CDI to Changes in Weights?
Euan Ritchie
Article
New Commitment to Development Index Shows Europeans...
Ian Mitchell
Contact: Sean Bartlett Center for Global Development sbartlett@cgdev.org +1.202.821.2947 Jessica Turner Center for Global Development jturner@cgdev.org  Sweden takes top spot; France, Norway, UK, Germany finish out top 5  Turkey, South Africa, Chile demonstrate growing influence  US, China: Large gap between economy size, development funds made available  LONDON – The Center for Global Development (CGD) released the 17th edition of its Commitment to Development Index (CDI) Thursday, which measures and compares how effectively countries–relative to their economy size–support development in other countries. Central to the CDI is the importance of national policies that go beyond just foreign aid, grouped in seven components: Development Finance; Investment, Migration, Trade, Environment, Security, and Technology.  CDI 2020 also incorporates a number of measures on global health, which are highly relevant to the COVID-19 pandemic as well as future pandemics. These include indicators on a country’s R&D, efforts to fight antimicrobial resistance, and ability to prevent, detect, and respond to disease security threats.   This year, Sweden ranks number one in the world in its commitment to development.  “Foreign direct aid itself is an incredibly important resource for poorer nations, but good development policy and practice take into account a country’s holistic approach, ranging from how they treat migrants, encourage trade, fight climate change, and more,” said Masood Ahmed, president of CGD. “That’s the value-add of the Commitment to Development Index and why it remains an important, wide-ranging dashboard for policymakers planning future development budgets in wealthy and emerging economies alike.”  “This year we have expanded the coverage of the CDI to include the emerging donors who are an increasingly important part of global development,” Ahmed added.  Historically, the CDI focused on the OECD Development Assistance Committee (DAC) countries and included some of the G20. In preparation for CDI 2020, CGD revised its methodology and expanded its analysis to include 40 countries engaged in substantial global development practices, including all the G20 countries and major economies from beyond the group. Given this expansion and the inclusion of emerging economies, CDI 2020 includes an “income adjusted” ranking for better comparison purposes.   “The Commitment to Development Index 2020 underscores that the policy and funding decisions of major economies within and beyond the G20, make a huge difference in the development of poorer nations,” said Ian Mitchell, senior policy fellow at CGD and the lead researcher of the CDI. “Using the CDI, one can draw clear conclusions on how policies either accelerate or inhibit development. Each country can assess its international contribution, and some countries are punching above their weight like Turkey, South Africa, and Chile, each showing development leadership in different areas.”  Main Findings of CDI 2020:  Sweden comes out on top in its commitment to development, scoring well across six out of the seven components: Its rank of first on migration includes high migrant inflows, a high level of refugees hosted, and strong domestic migrant integration policies. Sweden also comes in third on development finance, and in the top ten on trade, investment, environment, and security. In technology, it has a ways to go.  The European commitment to development remains the strongest in the world, with France, Norway, the UK, and Germany rounding out the top five.  The expansion of the CDI to include major emerging actors in the development space led to some interesting results: Chile ranks first on the environment; Turkey ranks second on migration issues; and South Africa ranks fifth on technology. Importantly, when adjusted for income South Africa ranks sixth overall in its commitment to development, with Chile at 12th.  The United States and China rank 18th and 35th, respectively. The world’s two biggest economies, while significant in dollar figures, come up short in relation to the size of their economies.  Materials and resources:  Interactive Data   CDI 2020 Brief  Overview Blog  Global Health Security Blog  China Blog  Methodology Paper  ###  About the Center for Global Development:  The Center for Global Development is an independent, nonpartisan, nonprofit organization that works to reduce global poverty and improve lives through innovative economic research that drives better policy and practice by the world's top decision makers. https://www.cgdev.org/page/about-cgd