There’s a growing conventional wisdom that for financing development, official development assistance (ODA) is declining in importance compared to private capital flows (PCFs). Foreign direct investment (and other private flows) are outpacing aid in many places, and indeed, ODA will be insufficient to cover the estimated $2.5 trillion in additional funding needed to finance the Sustainable Development Goals—especially with many donor country aid budgets under increased pressure. The world, as they say, is moving “beyond aid.”

As true as that may be in aggregate, however, the trend doesn’t apply evenly across groups of countries. While fairly significant data gaps (see below for more detail) prevent a complete and unbiased picture, the available data show that ODA remains a comparatively prominent source of external financing for fragile states (see our previous blog on what US aid to fragile states looks like).

Note: ODA data is from OECD CRS and includes all donors. PCF data is from the IMF World Economic Outlook and includes FDI, portfolio flows, and bank/other flows. The “fragile states” group includes the 20 countries that scored above a 90 on the Fragile States Index and had complete PCF data in the IMF database. These 20 fragile states are also included with their respective income group bucket (9 LICs, 10 LMICs, 1 UMIC). Income groups are determined by the World Bank (2016 categorizations). Out of 133 developing countries, 41 were excluded due to incomplete data (breakdown, including 12 fragile states: 12 LICs, 10 LMICs, 19 UMICs). 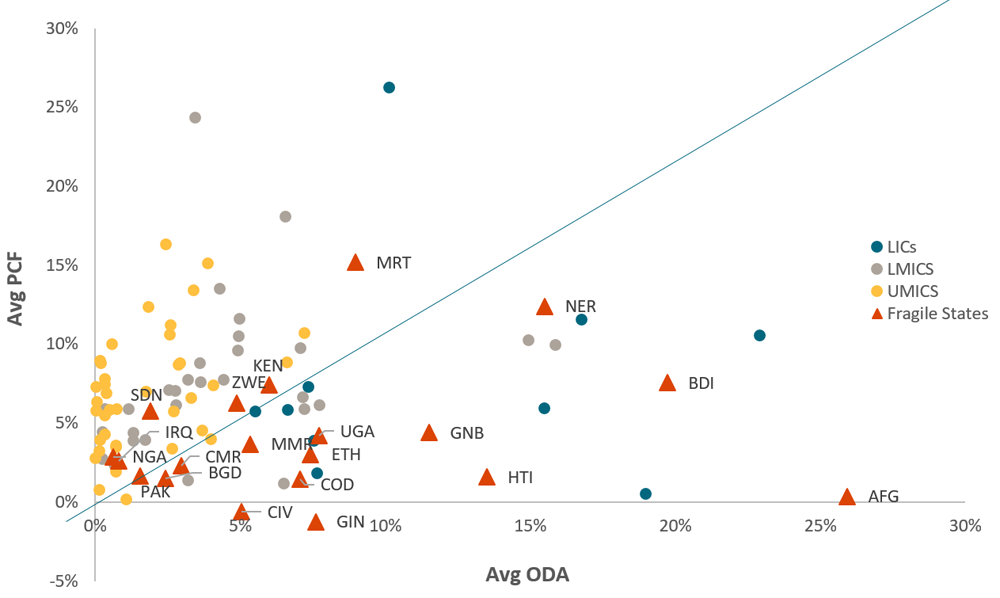 Note: Calculated by totaling five years of PCFs (2012–2016) to each country in the four categories and taking the average of those five-year totals of the countries in each category. See the end of the post for how we define “resource rich.” 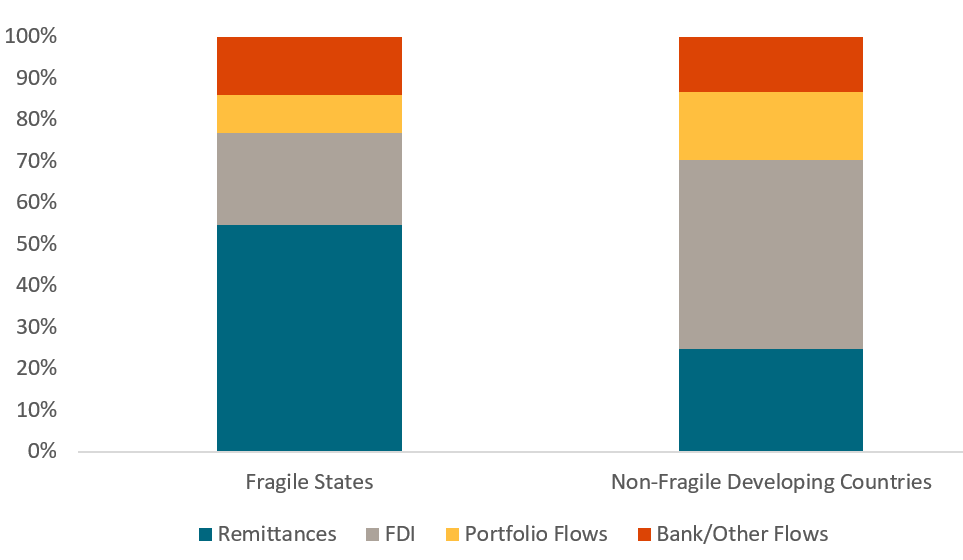 The IMF World Economic Outlook (the source of the data in this blog) includes three distinct private capital flow types in its database: foreign direct investment, portfolio investment (stocks, bonds, other equity), and banking/other flows (all net incurrence of liabilities). It also reports remittances, which we included above to capture a more complete picture of the broader external financing landscape. Fragile states count on remittances for more than half of their external financing over the past five years, in contrast to non-fragile low- and middle-income countries, which attract far more foreign direct investment. Portfolio investment also makes up a larger proportion of private flows in non-fragile compared to fragile states—especially when you consider that over 75 percent of portfolio flows to fragile states in the past five years went to just one country: Nigeria (again).

What’s ahead for development financing in fragile states?

The information presented in this blog offers a few insights into the current financing environment for fragile states, and where we might go from here: