US Aid to Fragile States: Where Does the Money Go? | Center for Global Development | Ideas to Action Skip to main content

US Aid to Fragile States: Where Does the Money Go?

By 2030, 60 percent of the world’s poor will be concentrated in fragile states, a shift that has prompted the United States (and other donors) to rethink how to confront the particular challenges of these environments and support a path to greater country resilience. To contribute to that conversation, CGD recently launched a working group that will look at the future of US development assistance to fragile states, with a report forthcoming later this year. This blog post takes stock of the current landscape of US foreign aid to fragile states and gives an overview of where the money is going, what agencies are involved, and for what purpose(s) the money is given.

Even as US government engagement with fragile states has grown in prominence over the last decade, development success has been mixed at best. Several new initiatives and proposed reforms seek to take stock of the lessons of the past to address shortcomings in how the US government delivers aid to address fragility.

For example, USAID, the Department of State, and the Department of Defense just completed the first-ever Stabilization Assistance Review in order to streamline interagency coordination efforts in conflict-affected areas, with a focus on learning lessons from Iraq and Syria. Meanwhile, a bipartisan coalition in the House introduced the Global Fragility and Violence Reduction Act, which tasks the three agencies above with developing country-specific strategies in 10 pilot countries and implementing “10-year plans” to combat fragility in those countries. In addition, as part of its proposed ”transformation,” USAID plans to create a Bureau for Conflict Prevention and Stabilization to harmonize the agency’s prevention, stabilization, and crisis response efforts with a heightened focus on fragility, conflict analysis, and preventing violent extremism. The new bureau would also assume the lead on stabilization programming implementation, as outlined in the Stabilization Assistance Review.

Other donor institutions and countries have also recommitted to combatting fragility. The World Bank agreed to double its funding for fragile, conflict, and violence-affected countries in the last International Development Association (IDA) replenishment. The IMF recently published a comprehensive review of its technical assistance programming in fragile environments with a set of recommendations for improving fiscal capacity. A coalition including France, Germany, the EU, World Bank, African Development Bank, UNDP, Spain, Italy, and the United Kingdom recently launched the Sahel Alliance and announced 500 regional projects with €6 billion in investment. And the United Kingdom committed to allocating 50 percent of its aid to fragile states, resulting in a substantial scale up in many of these countries since 2015.

There are some generally accepted commonalities among fragile states. Their governments often lack the authority to implement basic policy, struggle to control territory, and fail to provide basic public services to their citizenry. Transnational threats such as terrorism, mass migration, extreme poverty, food insecurity, and climate shock are also often rooted in and exacerbated by conditions of fragility. Yet fragility looks different in different places: some countries, like Somalia, struggle in most or all the areas mentioned above, whereas other countries grapple with just a few of these challenges. Pakistan, for example, has an economy that continues to grow with comparatively little income inequality, but has fared poorly in managing political and communal divides.

Just as fragile states are a diverse lot, so too are the definitions that attempt to describe them. The World Bank, Fund for Peace, and OECD all employ different metrics to measure various aspects of fragility. Even so, there’s considerable overlap in what each seeks to measure—and the list of fragile countries each produces. This piece uses the Fragile States Index because of its consistent methodology over a dozen years, and its use of a comprehensive and measurable set of indicators.

The US is the top donor to fragile states

In total, the United States was the largest donor to fragile states in 2016, as the table below shows. The US is the top or second largest donor to most of the selected countries outside of West Africa and the Sahel, where the European Union and World Bank provide more funding. China does not provide its ODA data to the OECD, but it has emerged as a dominant player, especially in sub-Saharan Africa. AidData estimates that in the past 15 years of available data (2000-2014), Chinese ODA exceeded $3 billion in Nigeria, Zimbabwe, and Ethiopia. And ODA represents only a small slice of China’s global aid footprint—most is classified as other official flows (OOF), which consists of non-concessional lending for commercial purposes. These flows reached $16.3 billion in Pakistan and $6.29 billion in Sudan over the same 15-year period. 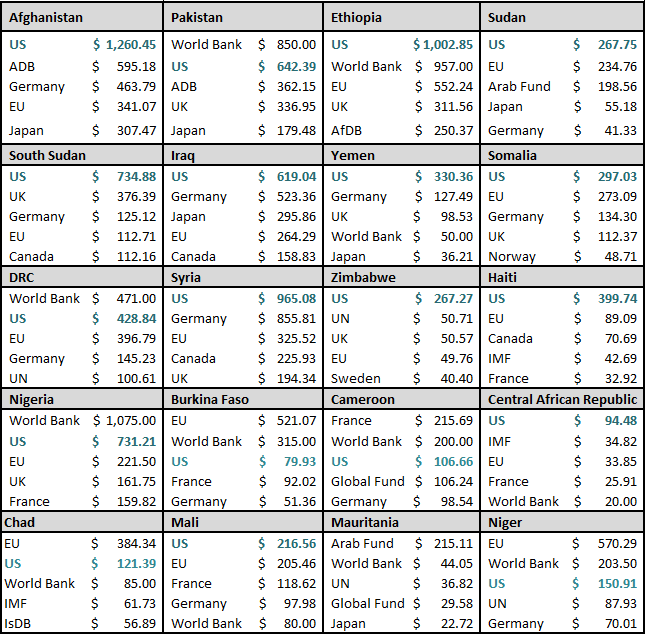 Note: These 20 countries were selected because they either ranked in the top 20 fragile states in the Fragile States Index for the past 10 years, have strategic relevance to the US (Syria, Yemen, and South Sudan), or are part of a region experiencing challenges typical of fragile states, such as internal conflict, terrorism, drought, and weak institutions (West Africa/Sahel).

A few fragile states receive a disproportionate amount of US assistance

US aid to fragile states is concentrated in a small set of countries, as the map below shows. The map displays the 35 countries that are classified as “Alert,” “High Alert,” and “Very High Alert” on the 2017 Fragile States Index, along with US official development assistance amounts over the three-year period of 2014 to 2016.

US Development Assistance to Fragile States 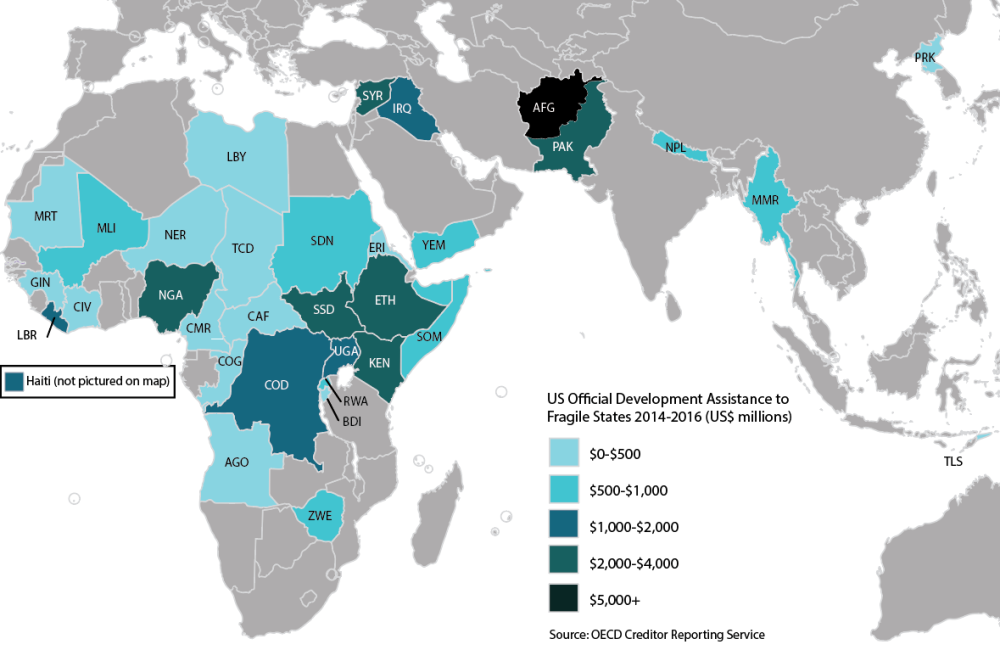 Afghanistan is by far the largest recipient of US official development assistance (ODA); in the last three years, the United States has spent in Afghanistan nearly double the amount of aid allocated to the next largest fragile state recipient (Kenya). More than half of US assistance to these states goes to only seven countries—Afghanistan, Iraq, Nigeria, Kenya, South Sudan, Pakistan, and Ethiopia. While US official development assistance spans all regions, 25 out of 35 of these states are in Africa (including Libya).

The remaining analysis looks at 13 fragile states selected because they consistently rank in the top 20 in the FSI or are strategically relevant to the United States. 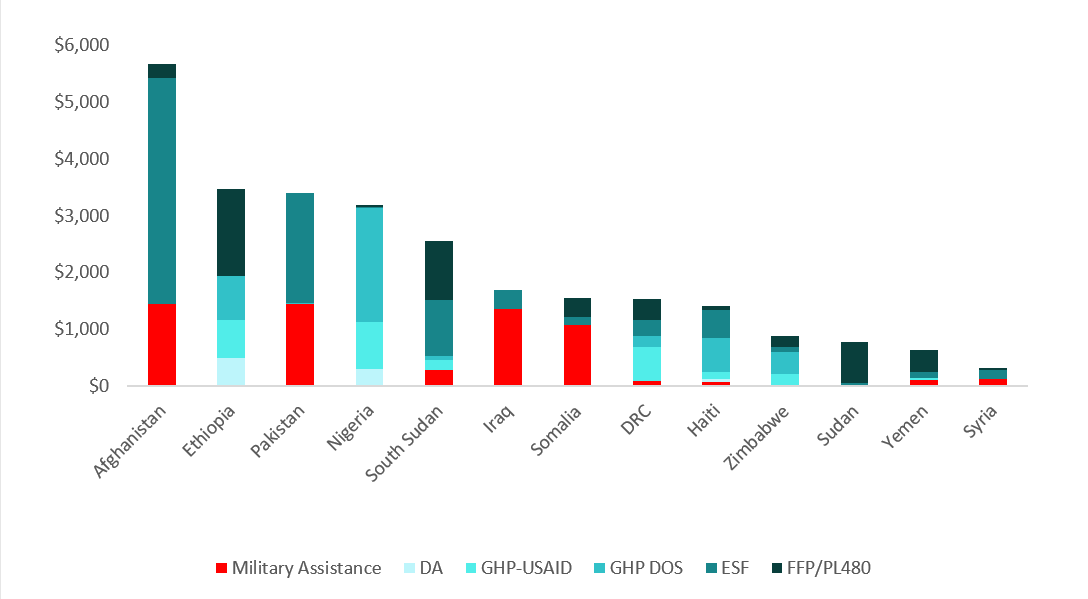 In examining the types of foreign aid the US government gives to this set of fragile states, the clear majority (78 percent) is economic or development assistance (programs with a development or humanitarian objective), with military assistance making up the other 22 percent (programs for armed forces or to enhance partner military capability). US military assistance is concentrated in four countries where the US has either a troop presence (Afghanistan, Iraq), a large peacekeeping force (Somalia), or historic partner military ties (Pakistan).

Most of the money directed to these countries (32 percent) comes from the Economic Support Fund (ESF). ESF funds support US strategic interests in countries of “special importance,” and do not need to be primarily for development purposes. The State Department oversees the allocation of ESF in coordination with USAID.

Fragile states also receive a significant amount of global health program funding (about 24 percent of total aid to fragile states, two thirds from the USAID account, one third from the State Department). The Food for Peace/PL 480 account, which supports food assistance in emergency and nonemergency situations, also makes up a substantial amount (18 percent).

By agency, DOD spends the most—until you factor out Iraq and Afghanistan

DOD spent more in fragile states than USAID, the Department of State, and the Department of Health and Human Services combined in the 2016 fiscal year. But 99 percent of that was security assistance, and almost all of that (97 percent) went to Iraq and Afghanistan. DOD’s tiny sliver of nonmilitary assistance (less than $20 million) is related to its involvement in the President’s Emergency Plan for AIDS Relief (PEPFAR). USAID is the top provider of development assistance by a substantial margin.

US foreign assistance by agency to 13 selected countries, with Iraq and Afghanistan (FY 2016)

US foreign assistance by agency to the same countries, minus Iraq and Afghanistan (FY 2016)

Most US development assistance goes to conflict, emergency response, health, and governance

Most US development assistance to high-priority fragile states is directed to a few specific sectors. In Afghanistan, Iraq, and Pakistan, the largest sector is conflict, peace, and security, which encapsulates security sector reform, conflict resolution programs, peacekeeping operations, land mine removal, child soldier demobilization, and more. That sector represents nearly 60 percent of US development assistance to these 13 countries in FY 2016, given the large amounts of aid going to Iraq and Afghanistan. Emergency response represents nearly 20 percent of US assistance to these states, and is, unsurprisingly, the top sector in countries where there is active conflict, such as Yemen, Syria, and South Sudan. While health, government and civil society, and “other” sectors don’t receive as much overall funding, in certain countries without active conflict—such as Pakistan, Nigeria, and Haiti—the United States invests more in long-term development challenges such as governance, health, education, and agriculture.

US Aid to Fragile States by Sector

Three questions for US development policy in fragile states

As the US government and its partners elevate fragility as a top development priority, three critical questions should factor in to US strategic considerations: