This post originally appeared on theguardian.com, as part of CGD’s sponsorship of the Guardian’s Global Development Professionals Network. Frances Seymour is now a distinguished senior fellow at the World Resources Institute.

If tropical deforestation were a country, it would rank third after China and the United States as a source of emissions. Currently a large part of the problem, forests can be an even bigger part of the solution because trees offer the potential to achieve negative emissions. For example, ending tropical deforestation and allowing damaged forests to recover could reduce global net emissions by up to 30 percent.

The 2015 Paris agreement recognises the importance of forests in achieving climate goals. The agreement incorporates a framework of reducing emissions from deforestation and forest degradation (Redd+). The “plus” connotes the enhancement of forest carbon stocks.

Here are three reasons why Redd+ is a valuable tool in the fight against climate change.

1. It offers a low-cost path to climate stability

Paying developing countries to reduce deforestation is one of the cheapest emission mitigation strategies available to industrialised countries. It allows them to take on more aggressive climate targets at a lower additional cost. Bilateral Redd+ agreements have been drawn up with commitments of only $5 (£4) per tonne of avoided emissions, compared to the $100 per tonne estimates for “clean coal” technologies.

Brazil has led the world in cutting emissions by reducing deforestation in the Amazon. And it did so at an out-of-pocket cost of only one-third the amount spent on hosting the 2016 Olympic Games. And that reasonable expenditure does not take into account all the other benefits produced by standing forests such as generating fresh water for drinking, irrigation, and hydropower.

While funding for developing assistance is always under pressure, it is particularly so in times of economic austerity and resurgent nationalism. An inconvenient truth is that decades of aid to the forestry sector has not turned the tide on tropical deforestation. But due to its novel payment-for-performance feature, Redd+ promises to be different by focusing on ultimate outcomes rather than proximate inputs.

If the desired results are not achieved, no payment is made. This feature of Redd+ is also politically attractive to developing country governments. A focus on results frames payments as a business transaction among equal partners rather than a paternalistic relationship between donors and recipients.

3. It helps developing countries be part of the global climate solution

Developing countries increasingly recognise that protecting forests is in their own interest, above and beyond the opportunity to obtain results-based finance. Many have signalled their intention to reduce emissions from deforestation as part of their national contributions to reaching the global climate goals, and have pledged to do more with international support.

The map below indicates the dozens of countries that are taking part in internationally-funded Redd+ programmes. Only those highlighted in orange have so far been promised any performance-based reward for success. 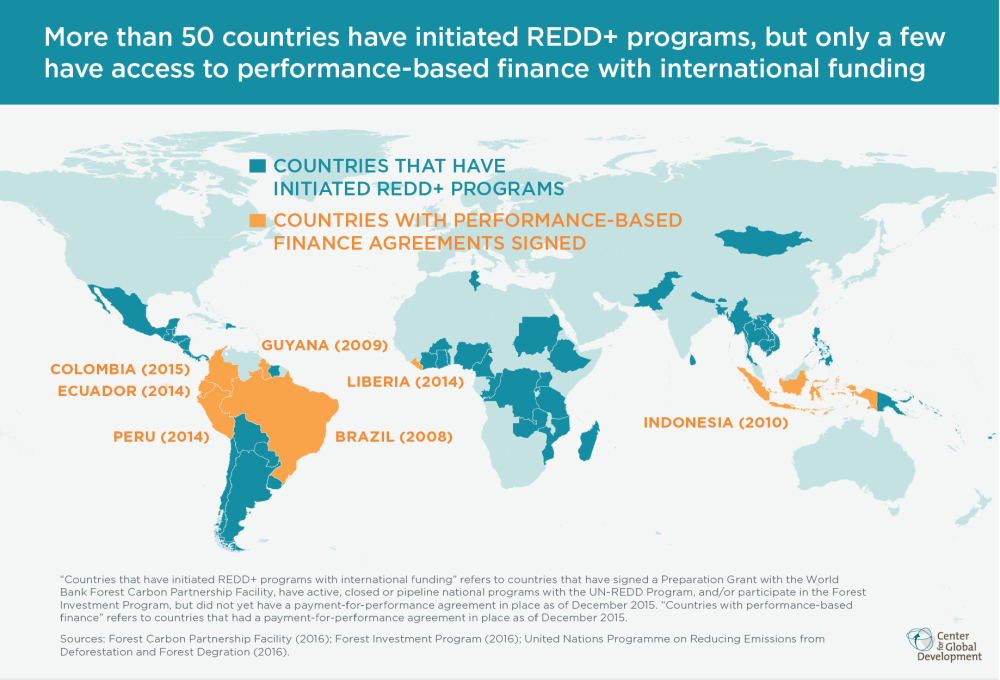 Only those highlighted in orange have so far been promised any performance-based reward for success. Source.

If Redd+ is so attractive to industrialised and developing countries alike, why hasn’t more funding been promised? Here are three criticisms put forward by aid agencies, and why they no longer hold up.

It used to be extremely difficult to monitor forest loss. Before images from satellites became widely available and affordable, it was almost impossible to know if remote areas of forest had been protected or cleared. But now advances in remote sensing technologies have made it possible to detect forest cover change in areas the size of a baseball diamond every few days. In addition to this, our ability to estimate the carbon stock contained in forests is constantly improving. These tools make it feasible to estimate the carbon emissions that result from forest loss with sufficient accuracy to provide a sound basis for results-based payments.

2. “There’s a high risk of corruption”

Some aid agencies have been reluctant to assign funds on a payment-for-performance basis due to fears of corruption. But compared to traditional funding for project participation, results-based finance offers fewer opportunities for diverting funds because payments are not made unless agreed outcomes are achieved.

3. “It has adverse impacts on communities”

To address possible risks to the rights and interests of local communities when a value is placed on forest carbon, principles for safeguards and benefit-sharing have been built into Redd+. Indeed, indigenous groups have used Redd+ policy forums at national and international levels to advance their agendas, and have begun to access a share of Redd+ finance directly.

The main complaint of Redd+ opponents is that buying the carbon protection services of developing countries lets rich, heavily polluting nations off the hook in reducing their own emissions. Let’s be clear: we need both to end deforestation and reduce emissions in rich countries. As Why Forests? Why Now?, the new book that I’ve written with Jonah Busch details, payment-for-performance for protecting tropical forests can be structured in ways to ensure that emission reductions are real and additional. By doing so, rich countries are “buying their way up” rather than “buying their way out”.

The science, economics, and politics of Redd+ are finally aligned. It’s time for results-based finance to follow.