Two synthesis reports on the science of climate change released this week show just how much halting and reversing tropical deforestation could contribute to global efforts to avert global climate change, which threatens citizens of developing countries first and worst.

The Intergovernmental Panel on Climate Change report released on Sunday presents topline numbers showing that 11 percent of current greenhouse gas emissions come from the net flux of carbon emissions from forest loss. That is, all the carbon dioxide that forests release to the atmosphere when they are burned and cleared, minus all the carbon that forests absorb when they are replanted or allowed to regrow rather than converted to pasture or cropland.

Further down in the IPCC report, and extracted by a new CGD-commissioned working paper, are numbers showing that as much as 24-30 percent of total mitigation potential can be provided by halting and reversing tropical deforestation. That is, the amount of carbon dioxide emissions that would be avoided by halting tropical deforestation, plus the carbon dioxide that would be removed from the atmosphere by continuing to regrow tropical forests at the current pace (figure 1).

Read on for a more detailed explanation. 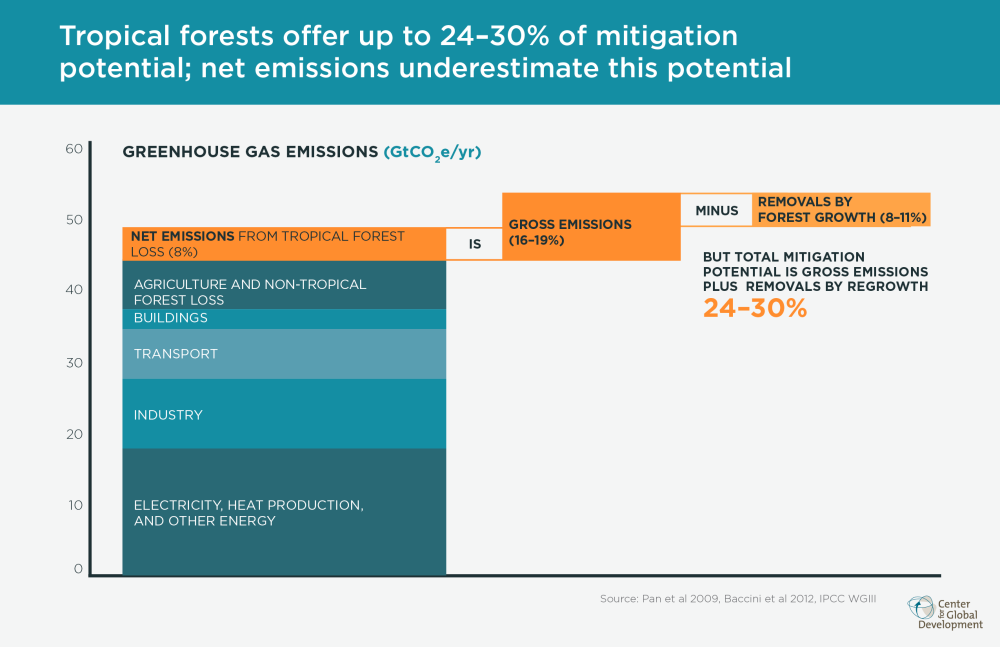 On Sunday, the Intergovernmental Panel on Climate Change released a synthesis of its Fifth Assessment Report. This synthesis report doesn’t break any new ground; rather it’s a one-stop overview of three massive reports released over the past year.  As I’ve blogged previously, these reports covered three areas:

Physical science: Human-caused climate change is undeniably occurring, and we’ve never seen anything like it before.

Impacts: The impacts of climate change are regressive—awful for the rich, catastrophic for the poor.

Mitigation: People need to take aggressive and immediate actions to maintain a safe and stable climate, including halting and reversing deforestation.

On Tuesday, CGD released a working paper by Dr. Rosa Goodman (Yale School of Forestry and Environmental Studies) and Prof. Martin Herold (University of Wageningen) that synthesizes a vast swath of science related to the climate-changing emissions that come from clearing tropical forests. The working paper, “Why Maintaining Tropical Forests Is Essential and Urgent for a Stable Climate,” explains to a lay audience how tropical forests keep global temperature in check. It shows why planting new trees is good for the climate, and why keeping existing forests standing is even better.  It describes why forest protection efforts focus on the tropics for greatest impact.  And it explains forest degradation, peat soils, and the feedback of climate change on tropical forests, among other concepts.

These two new reports help establish the share of potential climate change mitigation that could be achieved through tropical forests, both by reducing emissions from deforestation and by removing carbon from the atmosphere through reforestation.

Calculating potential climate mitigation is more complicated for forests than it is for other greenhouse gas-emitting sectors, like energy or transportation. That’s because energy use and transportation release emissions to the atmosphere in a one-way flow, but the flow of carbon between forests and the atmosphere runs in two directions (figure 2). Forests release carbon dioxide to the atmosphere when they are burned and cleared, and they absorb carbon when they are replanted or allowed to regrow, rather than converted to pasture or cropland. (Forests continue to take carbon out of the atmosphere even after they are mature, as described in Goodman and Herold’s working paper. As my colleague Frances Seymour writes in a new blog, intact forests are a safe and natural carbon capture and storage technology we already have.) 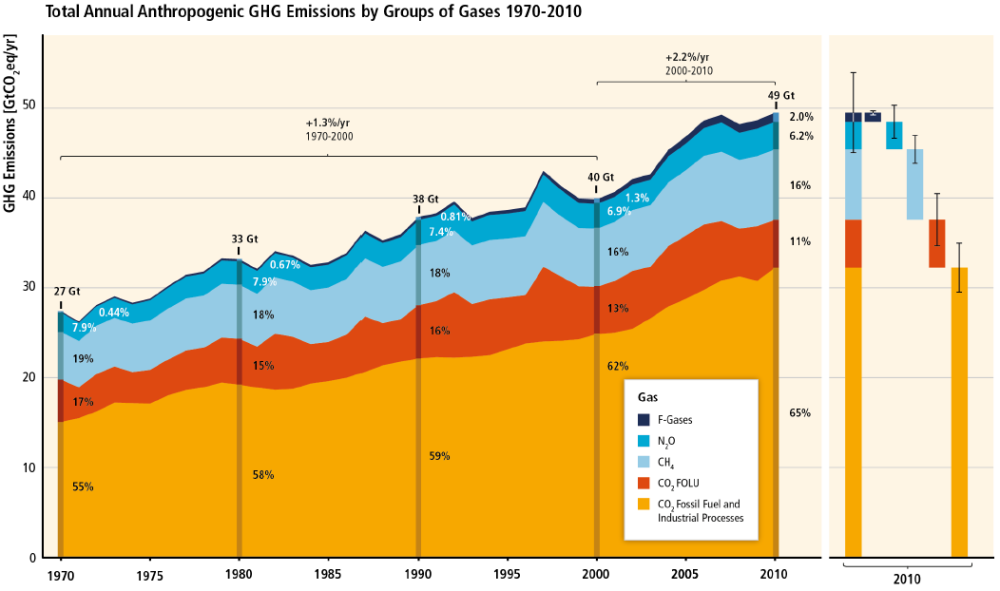 From a climate policy standpoint, we’re interested in the total potential contribution that policies and measures to conserve tropical forests could make to climate change mitigation.  We can calculate this number by adding removals to gross emissions, rather than subtracting. That’s because emissions from tropical deforestation and removals from tropical forest regrowth largely occur in different places, and thus represent two independent mitigation options.  It’s possible to simultaneously put in place policies to decrease greenhouse gas emissions from deforestation, and other policies to increase removals by forest regrowth. Brazil reduced Amazon deforestation remarkably from 2004-2013, while China independently reforested large areas. 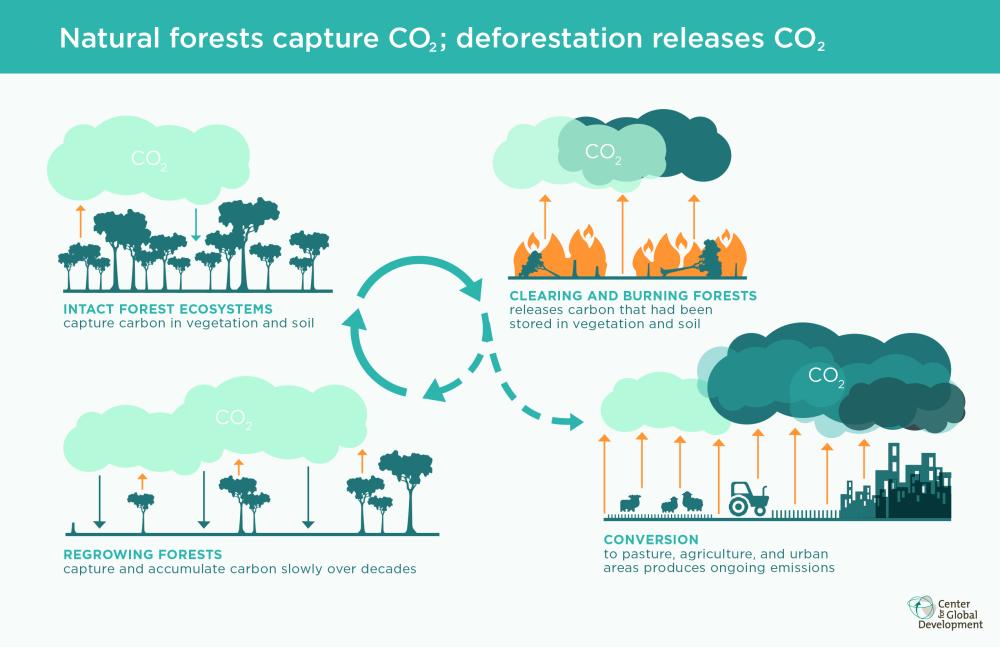 The referenced media source is missing and needs to be re-embedded.
Source: IPCC AR5 WGIII Fig. 11.8

The amount of carbon dioxide removed from the atmosphere by regrowing tropical secondary forests and tree plantations ranged from 4.3 to 6.2 GtCO2/yr—that’s 8–11 percent of total global gross greenhouse gas emissions, or about half the gross carbon emissions from forest loss. Subtracting removals from gross emissions yields a total net flux from tropical forest loss of 4.1 GtCO2/yr—most but not all of the net flux from forest loss globally shown in figure 1.

Adding removals to emissions yields tropical forests’ potential share of climate mitigation: 24–30 percent. See figure 4. This is the percent of total global gross greenhouse gas emissions that would be avoided by stopping all tropical deforestation tomorrow while continuing to allow tropical forests to regrow. (Doing so would cancel out 28–37 percent of emissions from sources other than tropical forests.) If the pace of forest regrowth could be accelerated, these numbers would be even higher.

Even after forests become mature, they continue to convert carbon from the atmosphere into biomass and soil. This is the safe and natural carbon capture and storage technology that Frances Seymour writes about. Removals from mature forests amount to around 3.7 GtCO2/yr. If we add these removals by mature forests on top of removals by regrowing forests, then stopping all tropical deforestation, plus continuing to allowing tropical forests to regrow and mature forests to capture carbon, would cancel out 31–37 percent of current annual emissions (or 36–45 percent of non-tropical-forest emissions).

A few caveats. First, as the Baccini column of the IPCC chart above shows, a portion of the carbon fluxes come from rotational forestry or swidden agriculture (shifting rotation of cultivated plots and fallow forests). So while the full 24–30 percent could be achieved in the first year merely by stopping all forest clearing, maintaining this pace over time would become increasingly challenging, since avoiding clearing in one year eliminates an area of land where a forest could potentially be replanted in subsequent years. Sustaining the current pace of forest regrowth would require continually identifying new lands available for reforestation. Second, the pace of carbon sequestration in a regrowing forest slows down eventually, meaning that greater areas of reforested land would be required to capture the same amount of carbon. Third, forest regrowth is already taking place. While human actions are required to sustain the current pace of regrowth, only those actions that increase carbon sequestration above current baseline rates should be considered additional. This distinction matters when determining potential eligibility for results-based carbon payments.

These numbers are calculated on the basis of just the two studies included in the IPCC report. Other studies of carbon fluxes from tropical forest loss and gain have been conducted as well. The emissions and removals reported by these studies have varied widely; see figure 5. Much of this variation in numbers across studies can be explained by the source data used (national self-reported data vs. consistent spatial data), the scope of fluxes included (deforestation only vs. other forest loss and peat degradation), and the exact years studied. Taken together these studies show that if tropical forest loss was its own country, its gross emissions would be somewhere between the European Union’s and China’s. 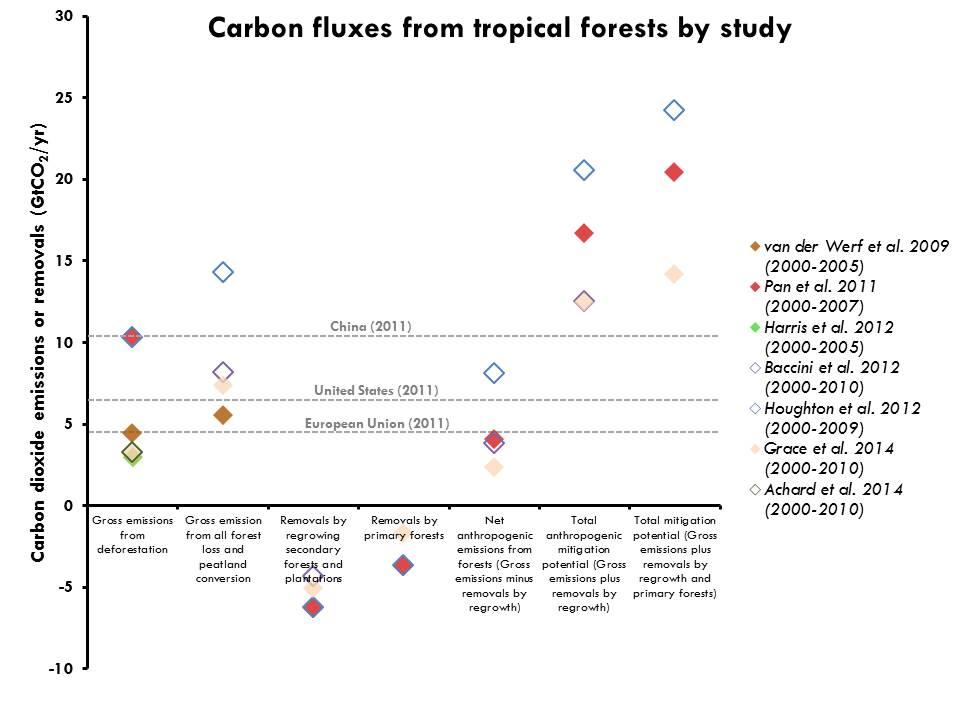 A few final points. The percentage of total global greenhouse gas emissions that comes from tropical forest loss has been shrinking in recent years, and is likely to continue doing so as emissions elsewhere (e.g. energy use in China) grow rapidly.

Furthermore, the percentage of mitigation that could come from tropical forests is a purely biophysical metric. It doesn’t tell us how tropical forest mitigation compares to mitigation in other sectors in terms of cost or feasibility. For more on this, stay tuned for future research from CGD as part of Frances Seymour’s and my forthcoming book, Why Forests? Why Now?

Finally, it’s worth placing the science described in Goodman and Herold’s working paper in the context of exciting recent events in the consistently advancing policy landscape on tropical forests and climate change. Last month saw the signing of an international declaration to halve tropical deforestation by 2020 and end it by 2030; a commitment by large palm oil companies to protect tropical forests; and two new pay-for-performance agreements to reduce deforestation involving Peru, Liberia, Norway, and Germany.

Maintaining a safe and stable climate requires sustaining this momentum toward halting and reversing deforestation for decades to come. My colleagues Lawrence MacDonald and Jing Cao have written an intriguing “future history” of how this might play out.