Some simple math on the financing of the Sustainable Development Goals (SDGs) shows that the path ahead may be a steeper climb than initially thought. A reasoned estimate puts the annual development investment needs for low-income countries (LICs) (World Bank’s 2015 classification) at about $350 billion per year from 2015 to 2030. Following the reasoning of the source paper, of that, about 40 percent could be private sector investment. Let’s assume that the cost of private investment is borne entirely outside developing countries, so it doesn’t encumber developing country banking systems or governments (heroic assumption, but I’m trying to be conservative on the direct impact of financing on developing countries’ financial systems). And, let’s also assume, again following from the source paper, that LICs can get their revenue mobilization up to 19 percent of GDP by 2030, from the 13.4 percent of GDP measured in 2012 (again heroic, but I want to get to a conservative estimate of residual financing needs). That will allow LICs to spend about $61 billion per year more on the SDGs.

Currently, official development aid to LICs from developed countries is running at about $25 billion per year. Let’s say donors heed the SDG call and double that to $50 billion per year, and it is all in grants—no loans (again, trying to get a lower bound estimate of residual financing needs).

That means LICs have an additional $99 billion per year left to finance. Since 2008, LIC governments have borrowed (on net) about $7 billion per year externally, so ramping up by another $99 billion a year won’t be easy. But for ease of calculation, let’s assume they do just that beginning in 2019.

Another Debt Crisis for Poor Countries?

LICs’ total stock of external government debt was $95 billion in 2016 and it probably crept up to about $110 billion in 2017-18. So, the debt stock almost doubles in 2019 and continues rising. Economists usually calibrate debt stock by its relation to some measure of national income—let’s use GNI and suppose (again heroically) that GNI for LICs grows 8 percent per year from now until 2030.

Here’s the time path of the external government debt to GNI ratio assuming financing needs are met through loans: 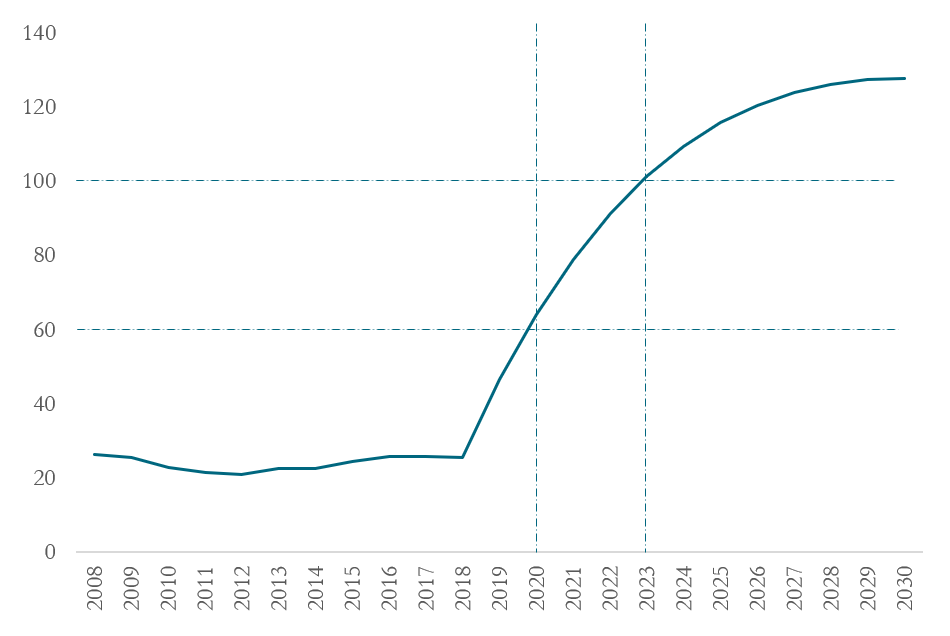 Economists begin to worry about debt sustainability when the ratio gets over 60 percent (in 2020) and macroeconomic stability is seriously threatened when debt is over 100 percent (in 2023): a country begins to show debt distress, meaning that the level of debt and the requisite debt service threatens the government’s ability to manage its own finances in a way that is noninflationary.

Now add to this arithmetic the finding by the IMF that 8 low-income countries are already in debt distress (up from 4 a year ago) and another 16 are at high risk debt distress (up from 7 a year ago),  before they start to climb the SDG debt hill in the figure above. (See also this blog post by CGD president Masood Ahmed about the prospects of another debt crisis in poor countries.) If there is an incipient debt problem in the developing world now, just wait until governments get serious about tackling the SDGs.

Are these estimates of debt burden exaggerated? All the assumptions made above are designed to lead to a conservative projection of government borrowing needs. LIC governments may, in fact, access some of the private finance that I assumed would all go to the private sector. Or private debt service may stress the overall need for foreign exchange from the banking system, compounding the government’s debt management problems. Domestic revenue mobilization is unlikely to grow as fast as I assumed—the problems of accelerating government tax takes are profound. Perhaps the costs of financing the SDGs are overestimated, but given the ambition of the SDGs in LICs, it seems unlikely.

So, what can be done?

There are a few more caveats that we need to add. This is an aggregate analysis across countries and LICs. We need to recognize that not all SDGs are equally capital intensive. And some attract more donor financing than others, so in certain SDG areas, we could be more optimistic about progress. Similarly, looking across countries, these aggregate numbers are probably heavily influenced by some large countries. A more disaggregated analysis would take account of cross-country variations in financing needs, the ability to mobilize donor funds, initial debt levels, and projected growth rates, which would impact upon each country’s ability to carry additional debt. Finally, financing and debt are only two of the constraints the international community face in its quest to achieve the SDGs. There are also institutional and technical issues to be resolved, as my CGD colleagues Charles Kenny and Mallika Snyder explain.

Commitments to lofty goals are important to give the international community a unifying objective for its work. With the SDGs, it was recognized that innovative financing would be needed, but the scale and complexity of the financing is even more daunting than envisaged in 2015. Simple arithmetic challenges us to think harder.