In the coming years, Africa will need a lot more teachers. UNESCO estimates that to achieve universal primary education in the next decade, Africa will need to recruit more than 6 million new teachers. The number for secondary education is 50 percent higher. A reasonable level of teacher pay is part of being able to recruit new teachers. At the same time, teacher strikes are common across the continent. Even before the current pandemic, there were recent strikes in many countries. Teacher pay is usually among the demands.

In our new study–“Are Teachers in Africa Poorly Paid? Evidence from 15 Countries”–we pulled together representative household data from 15 African nations in the last 10 years–Burkina Faso, Côte d’Ivoire, the Democratic Republic of the Congo, the Gambia, Ghana, Liberia, Malawi, Namibia, Niger, Nigeria, Senegal, Sierra Leone, Tanzania, Uganda, and Zambia–and examined how well teachers are paid relative to other workers with similar skill and experience. Specifically, we compared teachers with secondary or post-secondary education to other wage or salaried workers with secondary or post-secondary education. These other workers include managers, technicians, clerks, skilled agricultural workers, and others. We focused on primary and secondary school teachers, and we included those who work at either public or private schools. (We also examined a set of comparator countries in other regions, but in this post we’ll focus on Africa.)

Who are the teachers?

In the process, we learned a few things about the teaching profession. First, most teachers were men. On average across the 15 countries in our sample, less than 40 percent of teachers were women (Figure 1). Yet in three-quarters of our countries, there were more women in teaching than in other professions. So, despite being male dominated, teaching remains a better opportunity for women’s employment. (Some evidence suggests that female teachers, particularly at the secondary level, boost girls’ aspirations and school retention.)

Figure 1: Percentage of primary and secondary teachers who are female relative to other workers

Here are a few other characteristics of teachers and other workers in our sample. We find that teachers tend to be slightly older than other workers, by about two years on average across countries. (In Liberia, the difference exceeds five years!) There is lots of discussion about the optimal contract for teachers: fixed term or permanent? We observe enormous variation across countries in the proportion of teachers on fixed term contracts, from just 5 percent in Tanzania to more than 40 percent in Côte d’Ivoire. We also observe variation in how the market for teachers has changed over time. The percentage of teachers in the labor force has risen or stayed the same in every country in our sample. The teacher-student ratio has also risen in many countries, which suggests that the rise in teachers cannot solely be explained by rising numbers of students.

How are teachers compensated?

Teachers’ monthly earnings, relative to other workers with education, vary across countries. In Burkina Faso, Côte d’Ivoire, and Zambia, they are paid much more than other workers. In Liberia, Niger, and Sierra Leone, they are paid less. Yet in every country for which we have data, teachers report fewer hours per week in their teaching job than other workers (Figure 2). This isn’t some official report of hours: this is teachers’ own reports of their hours worked relative to other workers. Unsurprisingly, teachers on fixed term contracts earn much less than teachers on permanent contracts on average.

We examine two other key aspects of compensation: benefits and second jobs. We find that teachers–even fixed contract teachers–are more likely than other workers to report benefits like paid leave, medical benefits, and pensions. The surveys also ask teachers and others whether they have a second job: on average across our countries, teachers are more than 50 percent more likely to have a second job relative to other workers. 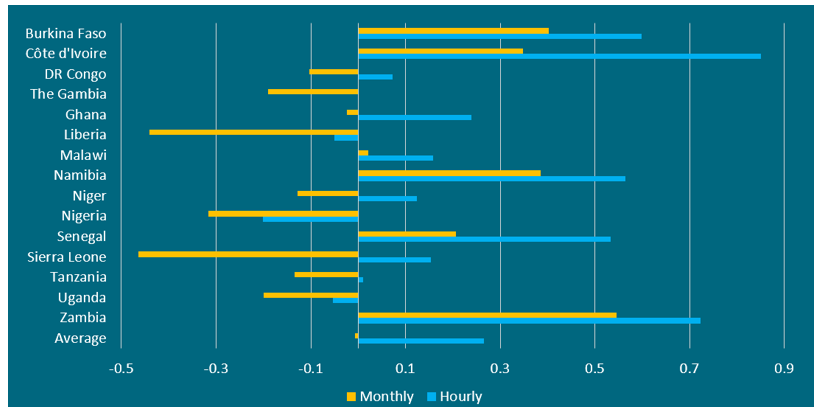 We don’t observe a link between teacher wage premia and other key economic indicators, like GDP per capita, female labor force participation, or even the rate of teacher unionization. (Teacher salaries do rise with GDP per capita, just not their salaries relative to other workers.)

Across our 15 countries, we observe a positive association between student test scores and teacher wage premia. With a different dataset, we examine the association between teacher salaries and student test scores within countries in francophone African countries. On average, we again observe a clear positive relationship. Of course, school systems that pay teachers more may have lots of other distinct policies. But this, coupled with similar findings from high-income countries, suggests that the link between teacher pay premia and student learning may merit further study. Higher teacher pay levels may not induce greater effort in the short run, but they may affect the professionalization of the teaching corps over time.

Teacher pay varies dramatically across countries, so this study does not point to a single policy recommendation across Africa (not least because we only have data for 15 countries).  At the same time, the variation observed in our study highlights the danger of adopting a single narrative about compensation for teachers across African countries. These results do suggest that teacher hours and non-salary benefits are important to take into account in discussions of teacher compensation. Teachers in high-performing education systems receive a fair wage but also adequate support and working conditions. Teacher salaries are one margin by which countries show their support to teachers, but they aren’t the only margin.

Want to read more on this topic?

Author order on this blog post and on the paper was determined randomly.