Our new analysis shows that, despite recent improvements, rich countries' intellectual property policies are still worse for development than they were more than a decade ago. Here we look at why these policies became inflexible, and what countries should be doing to let technology flow more freely.

Technological progress, which mostly originates in developed countries, is at the heart of improving social well-being and advancing productivity across the globe. Despite the vital role of technology for development, we show here that after a promising start in 2003, rich countries have since impeded the spread of technology across borders. Even though there has been an upward trend lately, rich countries can do more to allow knowledge to spread, without hampering innovations at home. Smart intellectual property policies such as liberal copyright laws or eased access to health and agricultural innovations will improve the lives of people across the globe.

Stringent protection of innovations at home comes at a price

In our interdependent world economy, productivity advances occur not only through locally developed knowledge and skills, but also from the absorption of expertise and technologies developed in other parts of the world. To name a few examples, just look at how mobile phones and digitalization affect developing countries and how biometrics can make development outcomes more effective, if well designed. For smaller economies in particular, the major source of their productivity growth is the technology and knowledge produced by the leading developed economies. That said, there are often impediments to the flow of technologies from the developed world to the developing world that prevent the latter from fully benefiting from global knowledge. Part of the problem of access is commercial—the lack of trade and investment opportunities. But another is regulatory, such as intellectual property rules (IPR) that prohibit the free dissemination of innovative technologies, or which impose contractual conditions on the utilization of new technological knowledge.

A lost decade? Little progress in intellectual property rules after a promising start

Since 2003, CGD's Commitment to Development Index (CDI) has been tracking the commitment of 27 developed governments to support the spread of technology to the developing world. The CDI has focused on two ways in which the developed economies can affect this process: The first is to help create technologies that foster economic and human development as measured by public and private spending on Research & Development (R&D) and tax incentives for R&D. The second is to help make the technology created more accessible via appropriate IPR.

Independently, the World Trade Organization in 2003 (following the Doha Round) instituted procedures to help ensure that developed country governments were fulfilling their mandate to facilitate technology transfers to the least developed country members. Until that point, it was uncertain whether and how developed country members were complying with the mandate to foster technological development in the developing world. As we have demonstrated previously, it is still unclear whether these rich countries are sufficiently fulfilling those obligations.

While the CDI’s technology component is not a measure of developed country compliance with international technology transfer mandates (nor was it designed to be), the CDI assesses developed governments’ commitments to objectives that are similar in spirit, such as raising the productivity potential of poorer nations. We do this by measuring and analyzing the restrictiveness of the country's patent regime as laid out in its legislation and rules.

Moreover, the CDI heavily weights the role of IPR of developed countries in facilitating—or at least not harming—the developing world’s access to global knowledge goods. As the chart below shows, since 2003, there has been a downward secular trend in developed country commitments to the spread of knowledge and technologies. The rating shown is for the 27 countries as a whole. However, since 2014, their commitment to the global spread of technology appears to have increased again.

This is a good sign. But there is scope for greater efforts on the part of rich country governments. The recent efforts are still shy of the dedication to technological development shown by developed country leaders back in 2003. 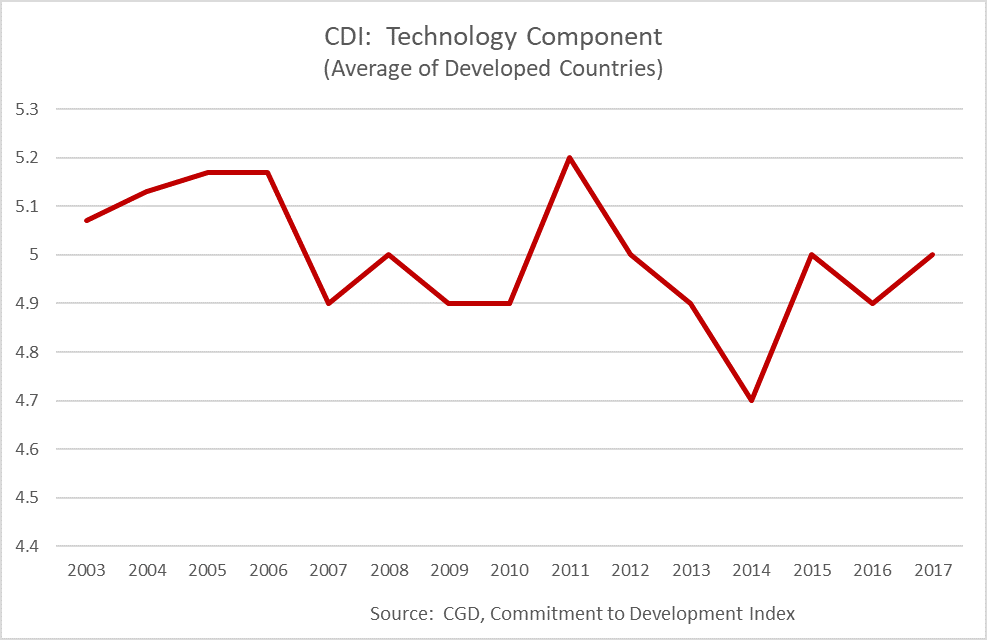 How supporters for a free internet became advocates for development

Much of the trend in the CDI’s technology component is due to changes in IPR. During the 2000 decade, developed economies like the United States, Japan, and the European Union pursued regional free trade agreements with developing country partners that included more stringent intellectual property provisions—especially provisions that limited exceptions to IPR. For example, developing country governments were required to limit the use of compulsory licensing, whereby intellectual property holders could be compelled to license their technologies to third parties if the technologies were not widely supplied in the market or licensing fees were too prohibitive. Other provisions tended to limit “fair use”; namely the ability of the public to use certain copyrighted works in certain ways and conditions without obtaining permission. Developed economies also pursued global agreements like the Anti-Counterfeiting Trade Agreement (ACTA), which attempted to raise enforcement standards. Individual countries, like the United States, pursued legislation like the Stop Online Piracy Act (SOPA) which sought to more heavily regulate internet service providers and search engines.

The public and user rights groups pushed back against such legislation and international agreements, regarding them as undermining internet freedom, and as unduly restricting fair use and other intellectual property exceptions. Consequently, during the 2013–2017 period, developed country governments appeared to retreat somewhat from further reforms. This helped, by default, to raise their CDI scores since less stringent regulations better enable technologies to flow to the developing world.

At the same, developed country governments were also more proactive in enabling the flows of technological knowledge. The European Union issued a “stay” on the patenting of plants and animal subject matter, while New Zealand raised the bar for approving such patents. This should benefit the developing world’s access to medicines and agricultural innovations. Canada, France, Germany, and the UK helped make digital technologies more accessible by tightening standards for software patentability. In 2015 Australia created more exceptions for copyright law, potentially enabling greater scope for learning-by-doing and imitation.

Help innovations to arise and spread, even beyond borders

Intellectual property regulations have effects beyond national borders. While they support incentives for innovation, they do affect how innovation spreads across borders. Developing economies typically require standards of IPR appropriate for their technological needs. Realistically they are not likely to fulfill their needs for combating poverty, disease, and fragility to environmental shocks by raising their intellectual property standards to those of developed economies. This would not increase local R&D, not with their limited technological resources, nor stimulate global R&D, given their relatively small market size. If anything, access to goods may be hampered if higher intellectual property standards raise market prices. Instead, developed governments should continue to fill the global R&D gap by contributing resources for R&D and design regulations—with flexible exceptions and exemptions—to support the wide diffusion of technologies to the developing world.

Walter Park is a professor of Economics and the PhD program director (Economics) at American University.

Blog Post
Using What You Have to Scale up Payments for COVID...
Alan Gelb and Anit Mukherjee