In a recent interview with the Financial Times, Peter Navarro, the director of the White House National Trade Council, suggested “it does the American economy no long-term good to only keep the big box factories where we are now assembling ‘American’ products that are composed primarily of foreign components.” Instead, he argued, "we need to manufacture those components in a robust domestic supply chain that will spur job and wage growth.” This policy proposal joins the administration’s executive orders to reduce migration as twin planks of an effort to create good jobs for Americans.

Sadly, the combined impact would have the opposite effect—as well as having grim consequences for the developing world. Americans have three choices regarding the low-paying, often hazardous jobs most don’t want: keep foreign labor here, continue to import the needed products, or use robots. To pretend otherwise is doing everyone a disservice.

Want to make products at home? It will cost you, America

To begin with supply chains, it is true that they increasingly cross borders—as much as 60 percent of US imports in some industries are components and inputs. But still, considerable barriers to trade are the reason to believe that trying to produce the same goods at home would create only a few, low paying jobs at a cost to the American consumer. James Anderson and Eric van Wincoop estimate that transport and border related trade barriers including translation expenses and currency exchange add 21 percent and 55 percent respectively to the cost of goods. (Policy barriers like tariffs account for only 8 out of the 55 percent.) Producers of goods outside the United States involved in supply chains to America have to be able to suck up the combined 86 percent markup in order to make their exports compete with producers in the US.

Foreign firms’ ability to profit even after this border markup tells us something about the kind of jobs often associated with component production and so the kind of component manufacturing jobs we’d hope to ‘bring back’ if we kept supply chains at home. Many supplier firms remain competitive in large part because they don’t pay workers nearly as much as they are paid in the US. In 2009, Indian manufacturing workers averaged $1.20 an hour in compensation—a little more than one thirtieth US manufacturing pay that year. In Taiwan, manufacturing workers were earning a little less than a quarter of the US level. In China, they were earning about five percent the amount of their US counterparts—and less than one quarter the US minimum wage. American workers wouldn’t want (and legally couldn’t be offered) jobs that pay so little. 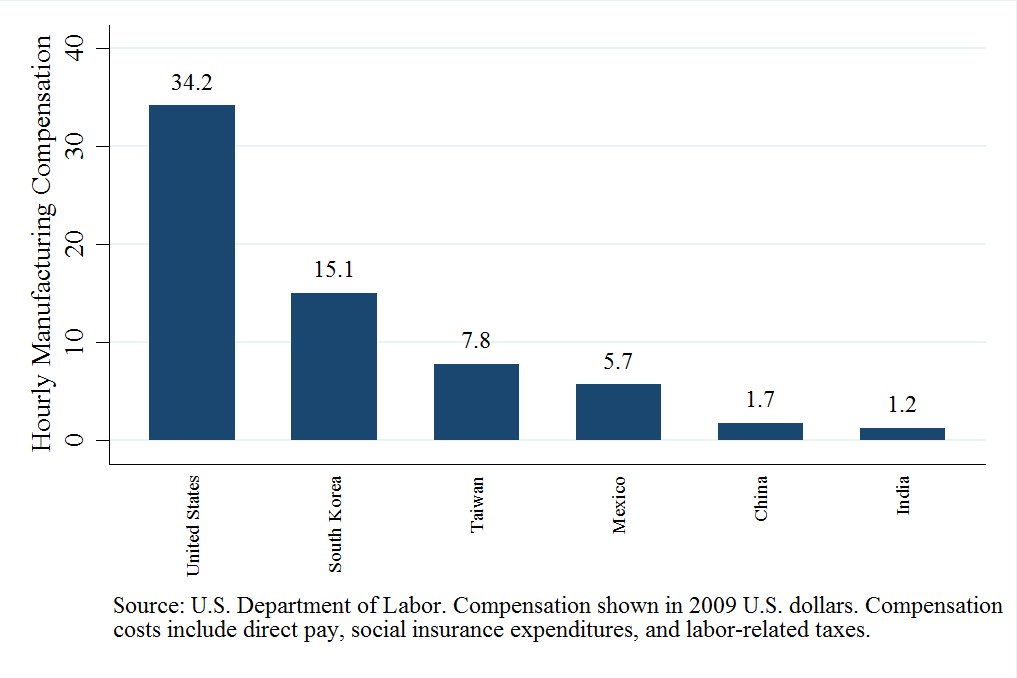 If America was to start trying to make rather than import the components currently being made abroad using the same technologies and workers paid American wages, those components would cost far more. That would drive up the cost of the finished product. And that would be bad for the US company making the product: they’d face tougher competition from finished imports from other places and lose any hope they had of exporting products themselves. Over 27 percent of basic metals and fabricated metal products imported to the US is re-exported in US exports, for example. Raise the cost of those intermediate products by trying to produce them at home using native labor, and you reduce America’s exports.

Keeping up with the technology

If more pay with the same technology doesn’t work as an option, there is another way to bring component manufacturing to a place with native wages 20 times as high as China today: use a different technology. And there is already a strong trend towards automation of jobs in industry. All the evidence suggests that Chinese competition was one factor speeding the decline of US manufacturing over the past 15 years, for example, but all the evidence also suggests that increased manufacturing productivity—new technologies—played a considerably bigger role. This is a global phenomenon: despite the low wages, manufacturing jobs are disappearing everywhere, losing out to machines. Manufacturing employment peaked in Brazil in the 1980s and China in the mid-1990s. Trying to increase intermediate product manufacturing in the US with native workers would only speed the trend. The jobs localized supply chains did create in the US would overwhelmingly go to robots, not people.

Our colleague Michael Clemens has looked at agriculture and found that, in that sector, trying to replace foreign labor with American labor doesn’t work even if the jobs are already in the US. One case is the seasonal farm worker program in North Carolina. In 2012, 7,000 foreign farm workers in the State labored in positions American workers wouldn’t take. Despite first preference rights to the positions, high local unemployment, competitive wages, and a lot of advertising, only seven Americans finished out the season working on these farm jobs. If it hadn’t been for the migrants, the work simply wouldn’t have gotten done. A second case Michael studies is the Bracero guest worker program, which ran from 1942 to 1964, bringing in millions of Mexican workers to work on American farms. When the program ended, there was no evidence of a jump in wages or employment for US farmworkers. Instead, Michael found evidence that the end of the Bracero program increased farm automation—once again, robots took the jobs that Americans wouldn’t take.

To be sure, China, Mexico, and elsewhere have gained considerably from the movement of goods and people to the US. For all jobs paying a tenth or a twentieth of the average US manufacturing wage aren’t attractive to Americans, for people in a country like China that saw 41 percent of its population living on less than $1.90 a day as recently as 1999, they were a godsend. Again, and despite low wages by US standards, low-skilled migrant workers earn multiples of what they would at home and send billions in remittances back to families desperately poor by any US standard. It would be a considerable setback to global development progress if the US tried to reduce the movement of goods and people from Asia, Africa, and Latin America.

Loss of global engagement is a loss for the US

But it would also be a setback to the United States. Because both supply chains and migration allow for more efficient production and increased competitiveness, there is no simple trade-off between jobs at home and jobs abroad. On average, a US firm that adds 10 percent more jobs to their foreign affiliates adds four percent more jobs at home. The same applies to migrant labor doing jobs here that Americans won’t do: in 2012, the 7,000 foreign farm workers in North Carolina contributed more than $248 million to the state’s economy, creating over 1,400 jobs for Americans.

There is a significant challenge to improve quality job prospects in this country. Americans want stable employment that pays considerably more than $7.50 an hour, and they should have it. Greater global engagement could and should help create the resources for the education and training, the tax credits, and the strengthened provision of services from child care through infrastructure that will generate more of those jobs. But cutting off from global engagement will simply leave everyone worse off. You simply can’t fashion good jobs for American natives out of good jobs for people from the developing world, because what counts as a good job is so radically different between the two groups.

Blog Post
USDFC Monitor: Why Is the White House Scuttling its...
Todd Moss and Erin Collinson