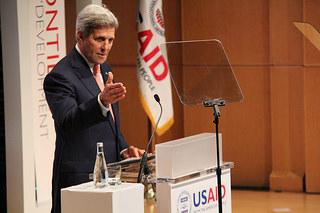 Last week USAID held its second Frontiers in Development conference, a two-day smorgasbord of keynotes, panels, roundtables, and an Innovation Marketplace all focused on Ending Extreme Poverty.  As the agenda can attest, USAID sought to explore its role (and that of foreign assistance, writ large) in ending extreme poverty from multiple angles. From ‘Can it be done?’ to ‘How will it be done?’ to ‘Who will do it?’, the notion of Ending Extreme Poverty received a 48-hour in-depth examination from some of global development’s leading thinkers and practitioners as over 600 members of the development community observed.

I applaud Frontiers for tackling tough questions directly related to ending extreme poverty, including inequality, fragility and instability, climate change, and the spread of Ebola. While I didn’t leave the conference certain USAID had the answers to ending extreme poverty as an agency, I did come away thinking it had at least asked the right questions and was pursuing this noble, and incredibly difficult, mission with eyes wide open.

Because ending extreme poverty looks to be a global vision around which the world will coalesce for the next 15 years through the post-2015 agenda, it’s encouraging that USAID is seeking to bring intellectual and policy firepower to what could easily become rhetoric with no real substance behind it.

Frontiers offered a substantive two days. Below are my additional takeaways, observations, and general points of interest. It should be noted that this list is completely subjective as I was not able to attend every session, not yet being able to be in two places at once.

Blog Post
The White House and the World: Practical Proposals for...
Scott Morris and Erin Collinson

Blog Post
Mark Green's Legacy and Priorities for the Next USAID...
Sarah Rose and Erin Collinson