Uttar Pradesh Just Planted 49 Million Trees in a Day. Shouldn't It Get More Than a Guinness World Record? | Center for Global Development | Ideas to Action Skip to main content

Uttar Pradesh Just Planted 49 Million Trees in a Day. Shouldn't It Get More Than a Guinness World Record?

Last week, 800,000 citizens of Uttar Pradesh—India’s most populous state—planted more than 49 million trees in 24 hours. This impressive feat shatters the previous record set in Pakistan (850,000 trees) and likely lands the volunteer tree-planters in the Guinness Book of World Records alongside the world’s oldest cat (Creme Puff, age 38) and the most surfers riding a single surfboard (66, last year in Huntington Beach, CA). But given the global climate benefits those trees will provide, shouldn't the tree-planters earn more than just recognition? Shouldn’t they earn some performance-based payments too?

Planting trees is good on many levels. For those who plant trees, rolling up one’s sleeves and gently placing a small seedling into the soil provides a sense of satisfaction. For people who live nearby, trees can provide fruit, firewood, shade, erosion control, and more. Kenya’s Green Belt Movement has been planting trees for years, responding to the needs of rural women.

In recognition of the many public benefits of forests, last year the Indian Parliament enacted an innovative tax reform to financially reward forest conservation. Following the recommendation of its 14th Finance Commission, it added forest cover to the formula used to determine how much nationally collected tax revenue is distributed to each state. This means that Indian states can now expect to see their share of tax revenue go down if they’ve deforested, or up if they’ve replanted. By my back-of-the-envelope calculations, the tree planters in Uttar Pradesh may have just upped their state’s share of future national tax revenue by as much as US$5 million (assuming 1,000 trees planted per hectare, $120 per hectare, and 80 percent tree survival).

As good as planting trees is for the climate, protecting existing forests is even better, as illustrated in the figure below from Frances Seymour’s and my forthcoming book, Why Forests? Why Now? Even if planted trees survive—which they often don’t—it can take decades or even centuries for replanted forests to recapture the carbon lost instantaneously from deforestation. Reducing deforestation in India by a mere 2,000 hectares a year—that is, by a mere quarter of a percent—would be as good for the climate as planting 49 million trees (assuming 50 metric tons of aboveground carbon per hectare and 800,000 hectares of forest loss per year). 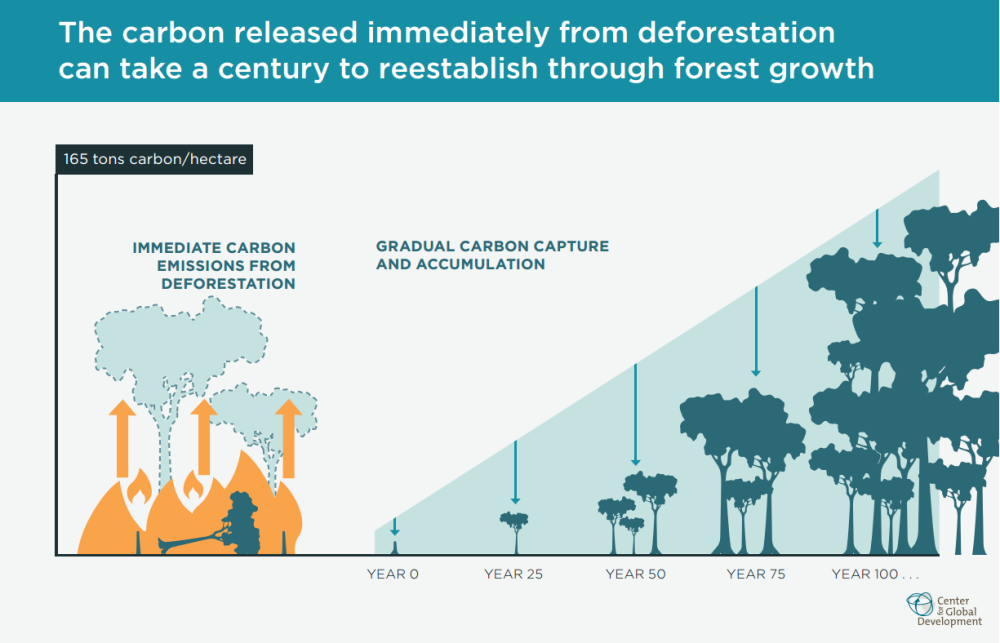 Because the benefits of planting and conserving forests are global, people around the world should be willing to pay tropical countries and states like Uttar Pradesh that protect or restore forests. Between 2006-2014, rich countries programmed about $9 billion toward conserving tropical forests, of which nearly half was performance-based, meaning that rich countries only pay if satellite monitors show success has been achieved. Still, this number really ought to be several times higher considering that conserving tropical forests is such a cost-effective way to fight climate change. Reducing emissions by conserving tropical forests would cost less than one-quarter of what it would cost in the European Union or the United States to reduce emissions from industrial sources by the same amount.

Uttar Pradesh’s tree-planting effort is well worth a Guinness World Record. Now it’s time for countries and states in the rich world to put up equally record-worthy amounts of finance for protecting and restoring tropical forests. Last December in Paris, Germany, Norway, and the United Kingdom pledged $5 billion for tropical forests in one day. That record was made to be broken.