Following the 2015 Addis Ababa Action Agenda, many have recognized the importance of implementing fiscal reform for increasing revenue in developing countries. In this context, many developing countries are gradually reforming their tax systems to make them more efficient and equitable, and are seeking technical advice and financial assistance from several donors and international institutions, such as the IMF and World Bank. In many cases, it is valuable to ask whether these reforms have made developing country tax systems more equitable. In a recently published paper we examine the experience of 45 developing countries (23 emerging and 22 low-income countries) over the 2000-2015 period and find that tax reforms have raised the income share of the poorest population groups within countries. We also use the Gini index— an index that measures inequality—to look at the resultant inequality in these countries and find that inequality of disposable income has lessened over time.

There are several reasons why tax systems of many developing countries are less effective in reducing income disparities. To begin with, they collect much less revenues in relation to GDP as compared to advanced economies to be able to fund transfer programs. On top of this, many of these countries rely more on indirect taxes, and because low-income households typically spend a larger share of their income on consumption as compared to high-income households, these taxes are regressive. Furthermore, developing countries typically have a large informal sector which does not pay income taxes, which therefore limits the distributional capacity of the tax system. Furthermore, income and wealth taxes are not well developed (or politically accepted) in these countries with the former largely taking the form of a wage withholding tax.

In our paper, we found that personal income tax reforms and strengthened tax revenue administration are particularly effective at improving income distribution—they widened the tax net by improving compliance. The results further show that the design of tax reforms has been ineffective in reducing disposable income inequality in sub-Saharan Africa.

The vast majority of tax reforms we studied were implemented from 2010 through 2015. These reforms centered on goods and services taxes (comprising mostly the value-added tax and excise duties) given their a priori potential for raising more revenue. By contrast, during the 2000-2004 period, most reforms covered trade and property taxes. The emphasis on trade taxes reflected the desire of these countries to move to more efficient form of taxation. Figure 1 provides the number of country-years of tax reforms in our sample and illustrates their heterogeneity across different tax categories. Excise reforms have been more frequently implemented. Fewer reforms have focused on property taxes, which is perhaps not surprising given that these reforms are typically opposed by vested interests. Reforms in tax administration have been more the rule than the exception, as they have accompanied specific tax policy reforms. Out of 119 country-years of tax reforms, only 17 corresponded to tax policy measures that were not also acompanied by improvements in revenue administration.

Figure 1. Number of country-years with tax revenue reforms by type 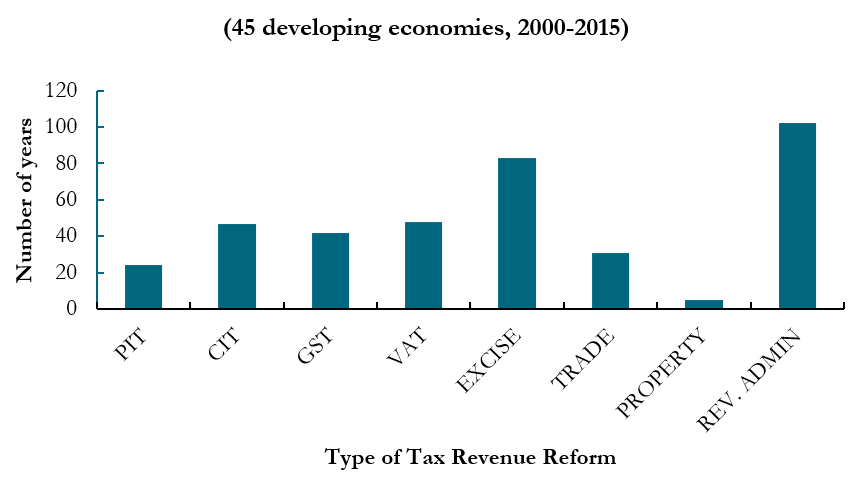 An analysis of various indicators of income distribution two years before and two years after tax reforms suggests that they have, on average, been associated with a decrease in the Gini index based on disposable income (Figure 2). The fall in disposable income Gini (top left panel) is larger than the one based on market income (top right panel), reflecting both the impact of taxes and increased capacity of governments to fund transfer programs. This is consistent with an increase in the income share of the bottom 10 percent of the population (bottom panel). 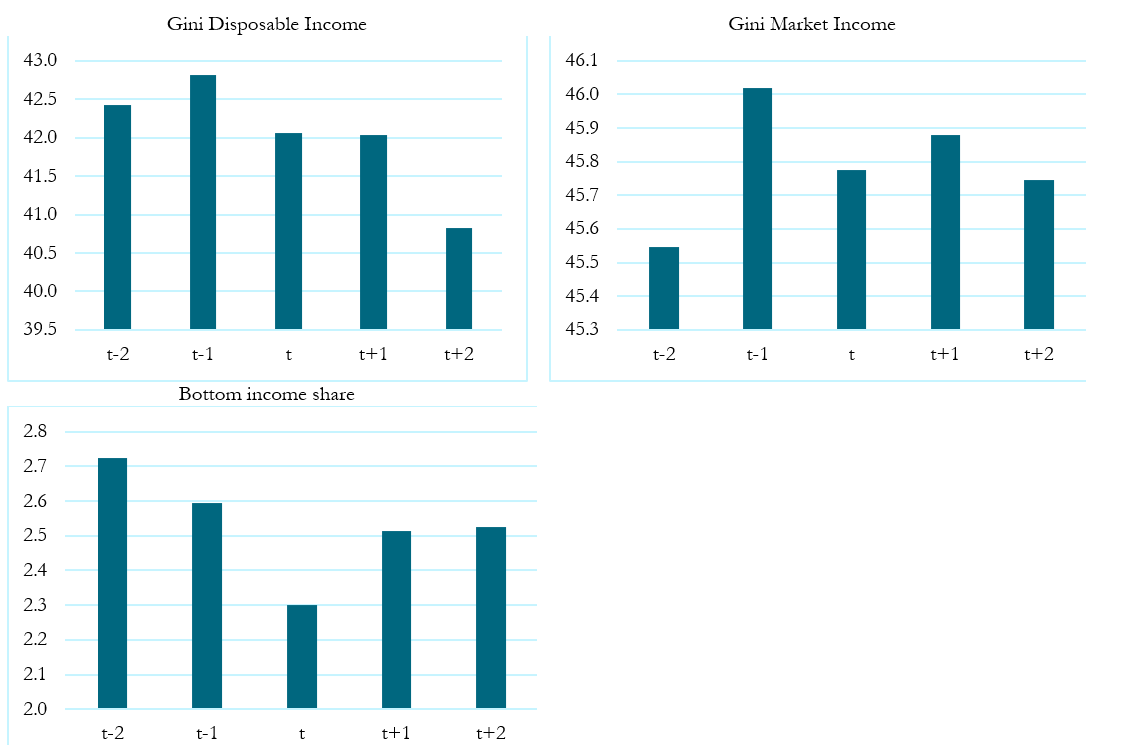 Note: x-axis in years; t=0 is the year of the tax reform shock.

We get similar results using econometric techniques to study the short- to medium-run relationship between tax reforms and different indicators of income distribution. After five years following tax reforms, the disposable income Gini falls by 0.7 percent (which represents one standard deviation). The effect is not as strong when employing the Gini index based on market income, but still there is a downward trend. In a similar vein, a general tax reform can help improve the income share of the bottom 10 percent of the population by 0.5 percentage points (which represents two standard deviations) after five years.

We further observe that income distribution improves the most following tax reforms in emerging market economies, this is possibly due to the fact that these countries´ tax systems are larger, more mature, and better-established. Results are even stronger when either fragile states or those rich in natural resources are excluded from the sample, with a reduction in disposable Gini index of 0.8 percent five years after the reform. Strangely enough, revenue administration reforms in sub-Saharan Africa did not have any impact on income distribution over the period under scrutiny. In the very short run, personal income tax reforms actually worsened the disposable Gini index. Since most sub-Saharan African countries in the sample are classified as fragile, the results suggest that the design of tax reforms in these countries has not been appropriate to address income distribution concerns. The other explanation for this result could be that the current low level of tax-to-GDP ratios in fragile states do not allow governments to appropriately fund transfer programs.

Well-designed tax reforms can help improve income distribution. Tax reforms also raise additional resources more efficiently to fund transfer programs, which traditionally have even larger impact on income distributions. However, the design of reforms has to be suited to countries´ specificities. It is inappropriate to use the same approach in fragile states as in other developing countries, given their rather unique social and economic environment. And in all countries, the details of the reform package that will deliver the greatest results should be determined in light of local contexts.