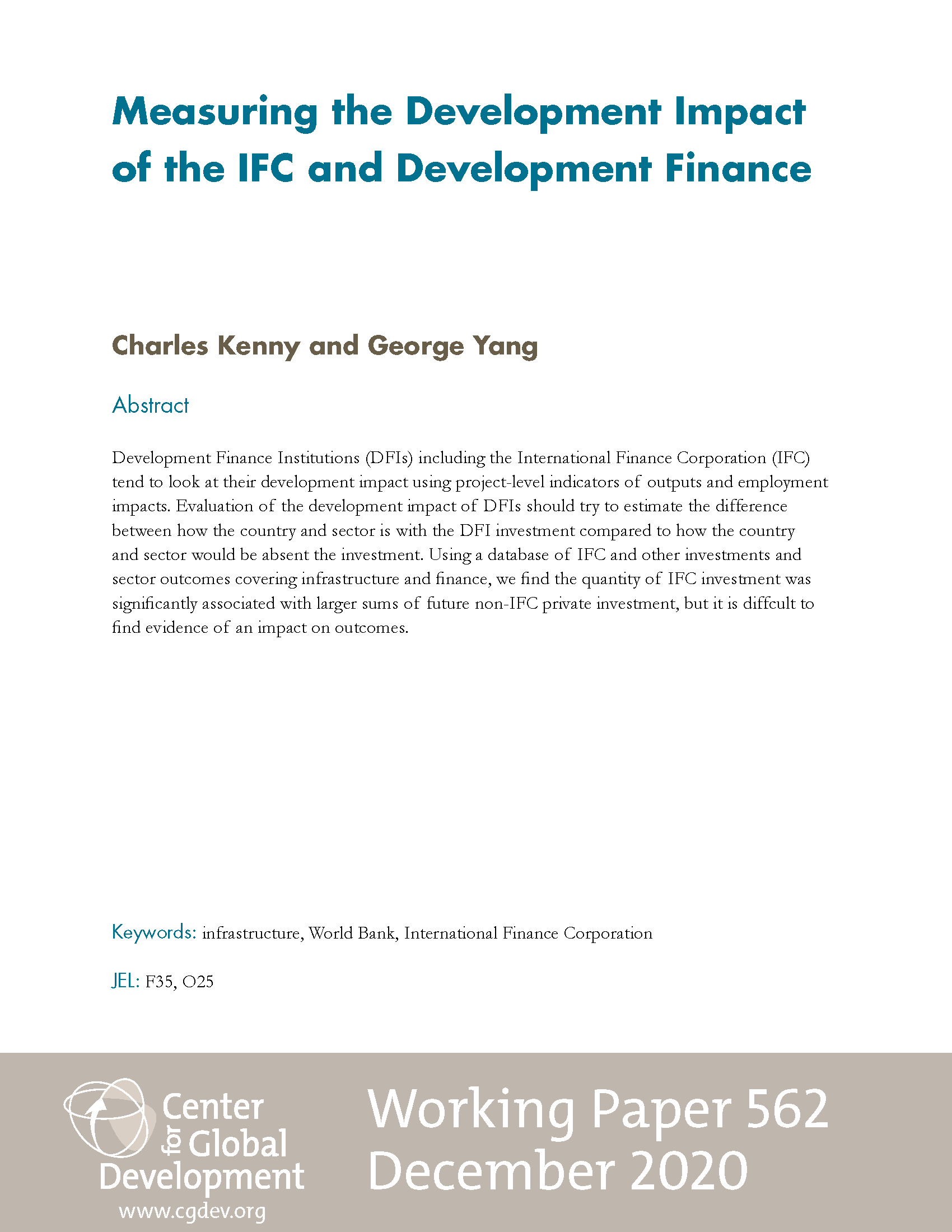 Measuring the Development Impact of the IFC and Development Finance
Charles Kenny
and
George Yang
December 16, 2020

What impact do development finance institutions (DFIs) like the IFC have on actual development? To date, most analysis has taken a project-level approach: how many jobs are created by the investment backed by the DFI, or how many electricity connections will be rolled out by the project. Today, George Yang and I release a paper that tries to take a sectoral approach to impact: does an IFC electricity investment lead to more power production per capita in a country, or financing provided to local banks lead to a larger proportion of people with a bank account?

There are problems with the traditional project-level approaches to DFI impact. First, it is difficult to know how much project outcomes are dependent on DFI financing—perhaps the project would have gone ahead in a similar manner without the involvement of a DFI. Even if DFI finance was a necessary part of the package, it is never a sufficient part (private players need to be involved). That leads to questions of impact attribution. Second, project level measures might miss broader sectoral effects (good and bad). Perhaps the DFI financed project simply displaced a similar investment that would have happened otherwise. Or perhaps the DFI project had demonstration effects—crowding in finance to other projects that wouldn’t have happened without the encouragement of previous success. The IFC argues that its Scaling Solar project, by demonstrating the feasibility of financially sustainable solar generation in developing countries, helped build the market for such investments, for example.

Of course, that points to problems with a sectoral approach to DFI impact as well—it will miss effects on other sectors or other countries. And that’s only one problem with our analysis. We don’t have a good natural experiment, so we’re left with correlations between prior DFI outcomes and subsequent sector performance across subsectors and countries. And we only have a limited number of measures of that performance, of which only a subset might be relevant to any particular investment made by the DFI in the sector (an electricity project might be primarily designed to increase productivity rather than output, for example, and we don’t have productivity measures).

With those significant caveats, we take data on private provision of infrastructure and extract information on IFC and multilateral development bank investments in private electricity production and distribution as well as ICT projects. We then look at the relationship between DFI investments and total private investment at the sub-sectoral level as well as investment and subsequent sector outcomes including electricity consumption per capita, access to electricity and mobile phones.

More development finance to power, more power to the people? 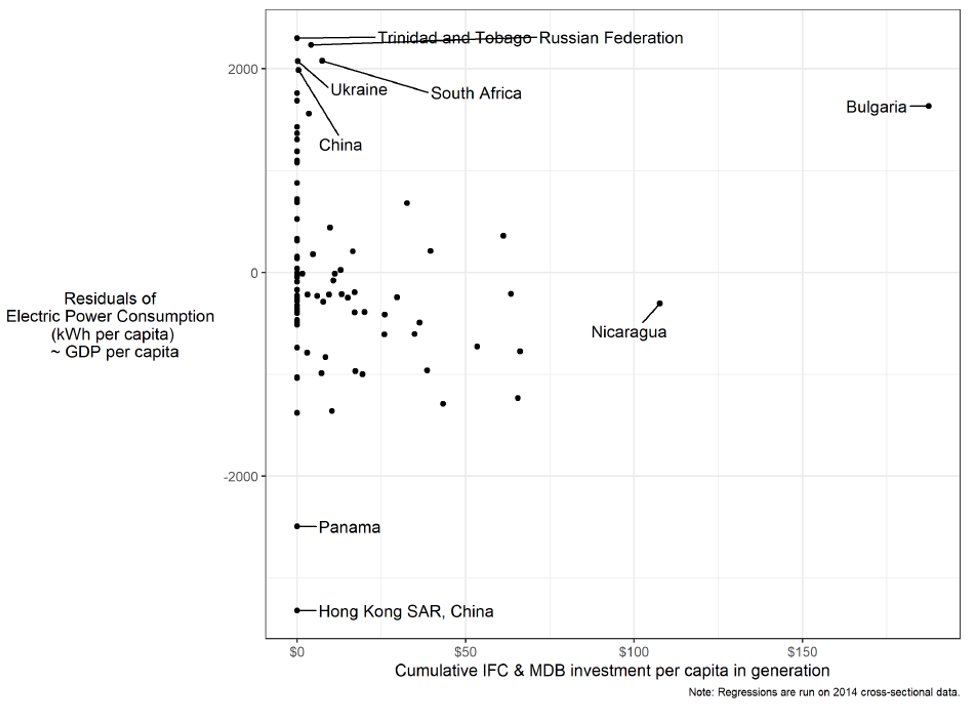 One reason might be that we can’t find any relationship between the level of overall private sector investment and infrastructure outcomes at the cross-country level. That result actually matches earlier World Bank analysis of private provision of infrastructure that found weak evidence of an effect of private provision on electricity connections (even while operational efficiency considerably improved).

That doesn’t show there’s no benefit to countries from introducing private provision—especially if it is competitive. Done right, it should at least free government finance to invest in other things including education and health. But the available evidence does suggest that private finance, even backed by considerable public finance and guarantees, is no shortcut to meeting the universal access targets of the Sustainable Development Goals, or considerably improving the quality of provision at the country level.

We repeat the exercise for IFC investments in the financial sector and find the same (non-) result. And perhaps that should come as little surprise, either. Despite being the biggest international development finance institution in the world, IFC investments are just pretty small compared to the size of the economies in which they are made. Its cumulative investments over 20 years as a fraction of annual GDP are a percentage point or less in most countries. Even though infrastructure and finance are the two biggest sector portfolios for the IFC, the country-level sectoral impact of its investments risks being lost in the noise. Apparently, the same is true of multilateral development banks’ collective private sector investments in infrastructure.

The money isn’t wasted: many of the financed projects deliver valuable jobs and services. But these results are one more reason to believe that, at the macro level, development finance to the private sector will be marginal, not transformational.