However, research and policymaking relating to childcare often occurs in siloes⁠—with one group of people interested in improving early childhood development (ECD) and another group of people interested in supporting women’s economic empowerment. Because of these siloes, few policies, programs, or research studies connect the vision of nurturing and caring for children with the vision of encouraging women’s employment and economic wellbeing. In a new paper, we bridge this gap to examine whether community-based childcare centers can improve early childhood development and increase women’s economic empowerment.

The setting of our study

To estimate the program’s impacts, we interviewed a sample of around 2,000 female public works participants with children aged six or under, split between the 18 sites with and without childcare centers. Fourteen months after the childcare centers opened, we tracked down the same women to find out if they had used the childcare centers and to ask about their economic activities; their broader wellbeing; and their children’s development. The COVID-19 pandemic broke out midway through our study, so the childcare centers closed for four months, but they were up and running again by the time we went back to talk with program participants in February 2021.

Figure 1. Use of childcare centers over the past 12 months 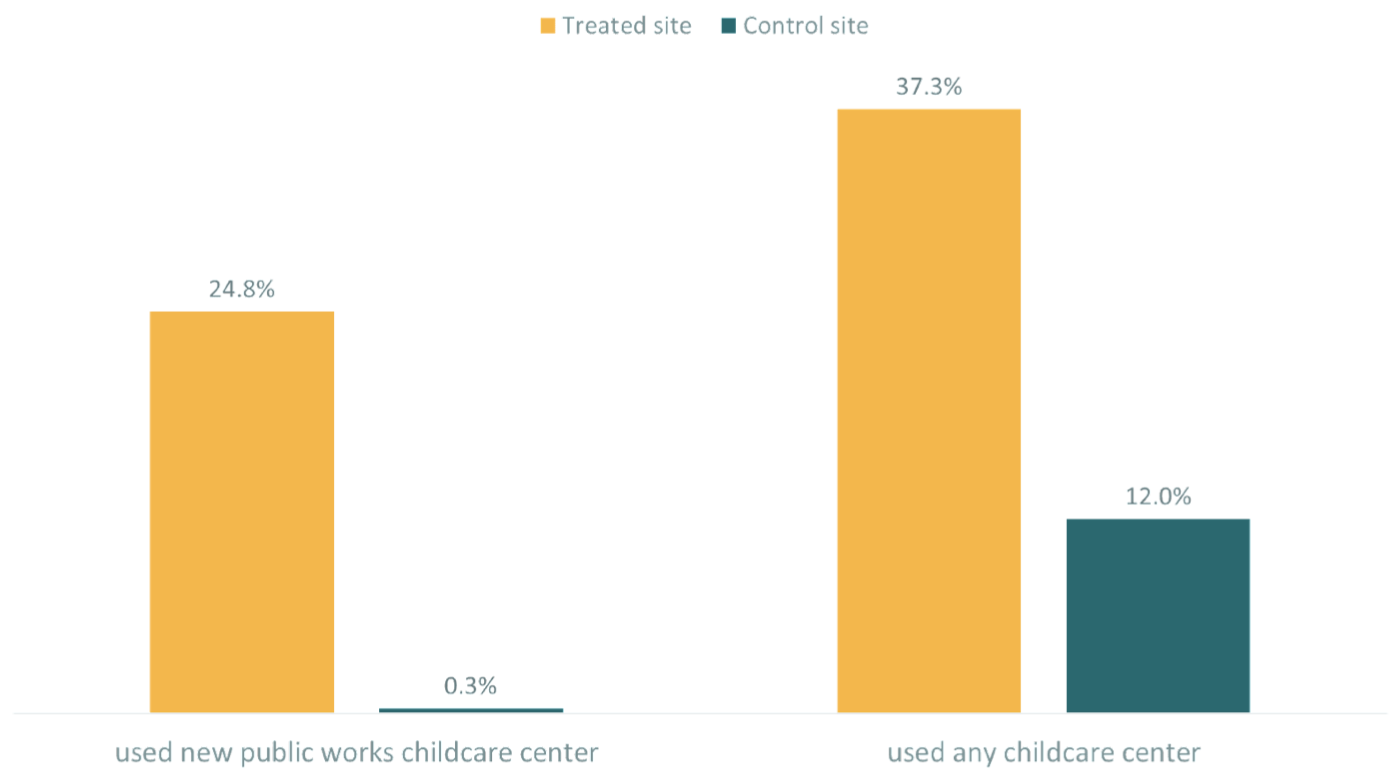 What happened to women and children who used the new childcare centers?

Figure 2. Effects of the childcare centers 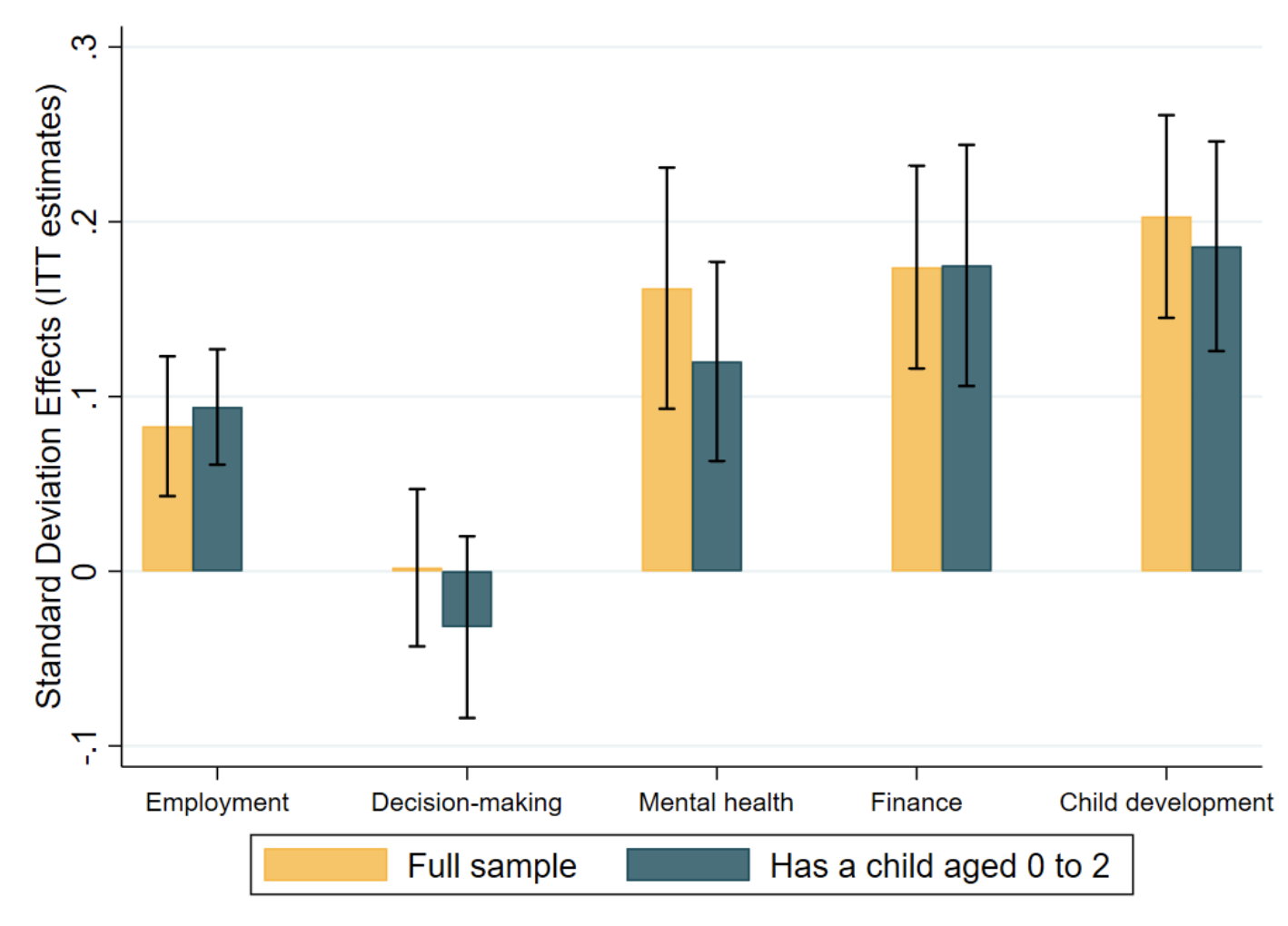 Women’s employment and financial outcomes improved, and so did their psychosocial well-being

Women in the sites with childcare centers had improved employment outcomes, with 0.08 standard deviation gains on average. They spent 18 percent more time engaged in paid work, and they had higher monthly earnings from salaried jobs. Part of this shift in work resulted from some women being directly employed to work in the childcare centers (67 of the 928 women we interviewed in the sites with new childcare centers ended up working as childcare providers in the new centers). But we still see improved outcomes for women who weren’t working in the childcare centers, which suggests that change occurred at least in part by freeing up women’s time to work. In addition to women working and earning more, they had better financial outcomes (with increased savings and an improved ability to get cash in an emergency). We also find some evidence of improvements in mental health, a dimension often overlooked in studies investigating the effects of ECD interventions.

Women’s agency did not change

So, women were working more and earning more, but did this improved employment shift how much control they had over household decisions or transform their gender attitudes? Apparently not. We don’t see any significant changes in women’s involvement in decision-making in the household, their attitudes toward gender, their freedom of movement, or their partners’ involvement in childcare and other household activities. Why didn’t these things change? Perhaps they’re sticky and take time to evolve. Or perhaps having more income isn’t enough to shift the balance in decision-making power. There’s more work to be done here to fully understand what shapes intrahousehold dynamics.

Let’s turn to look at the children now, were they better off? Children in sites with the new childcare centers had improved early childhood development scores, with a 0.2 standard deviation gain on average. These gains primarily showed up in gross and fine motor skills, with no increases nor deterioration in language development. It’s worth noting that the childcare centers were closed for a third of the time we study, so these positive impacts on child development might have been even higher without the COVID-19 disruptions.

Altogether, our results provide promising new evidence that offering childcare has the potential to positively impact both women and children. However, there’s still more room for change⁠—women’s decision-making agency and partners’ involvement in domestic tasks didn’t budge at all.

A final thought⁠—was the program cost-effective? The childcare centers essentially paid for themselves. The monthly cost of operating each center was USD 16.6 per child if they were running at full capacity. The centers typically had around 33 children enrolled instead of the maximum 50, which raised operating costs to USD 25.2 per child on average. Women who used the childcare centers earned an extra USD 23 to 25 per month (based on estimates of the effects of the treatment on the treated). If we factor in any additional benefits from children’s improved development, then the social gains would be even higher.

Are there other childcare models that could have positive impacts on multiple outcomes? Undoubtedly! Hopefully this is the start of more policymakers, practitioners, and researchers thinking holistically about how to integrate women’s empowerment with early child development.