What to Expect at This Year's International AIDS Conference

Our Condolences to All Affected by Flight MH117

There’s no doubt that Treatment as Prevention (TasP) will receive continued emphasis at this year’s International Aids Conference (IAC), as advocates argue for aggressively expanding treatment from the 9 million worldwide currently on antiretrovirals (ARVs) to the 35 million people who are HIV infected.  But at the TasP workshop in Vancouver last month the more challenging and novel topic was pre-exposure prophylaxis, or PrEP.  A whole array of sessions on PrEP is already on the agenda for next week’s conference in Melbourne, and our bet is that PrEP will generate a lot of buzz – an approach with intriguing potential, but edgy downside possibilities.

This acronym is used to encompass several technologies which involve uninfected people using ARVs to protect themselves from infection.  The two most-discussed methods involve a gel containing an antiretroviral drug (ARV) and a pill taken orally. (Both use ARVs also recommended for HIV/AIDS treatment by the WHO’s 2013 HIV/AIDS Treatment Guidelines, such as tenofovir or Truvada—a combination of emtricitabine and tenofovir disoproxil fumarate.) The gel must be applied a few hours before and/or after sex, while the pill must be taken daily.

With PrEP, a woman can protect herself without her partner’s knowledge and independent of his consent, a feat hardly possible with a male condom. As Figure 1 shows, in the 20-29 year old age-group, the burden of HIV infection is twice as large for women as for men. Furthermore, given the age disparity between partners, the high infection rate of 20-29 year old women probably drives the higher infection rate among older men.  An efficacious female-controlled HIV prevention technology offers the intriguing possibility of not only protecting and empowering the women who use it, but also protecting their male partners and slowing the future progress of the epidemic. 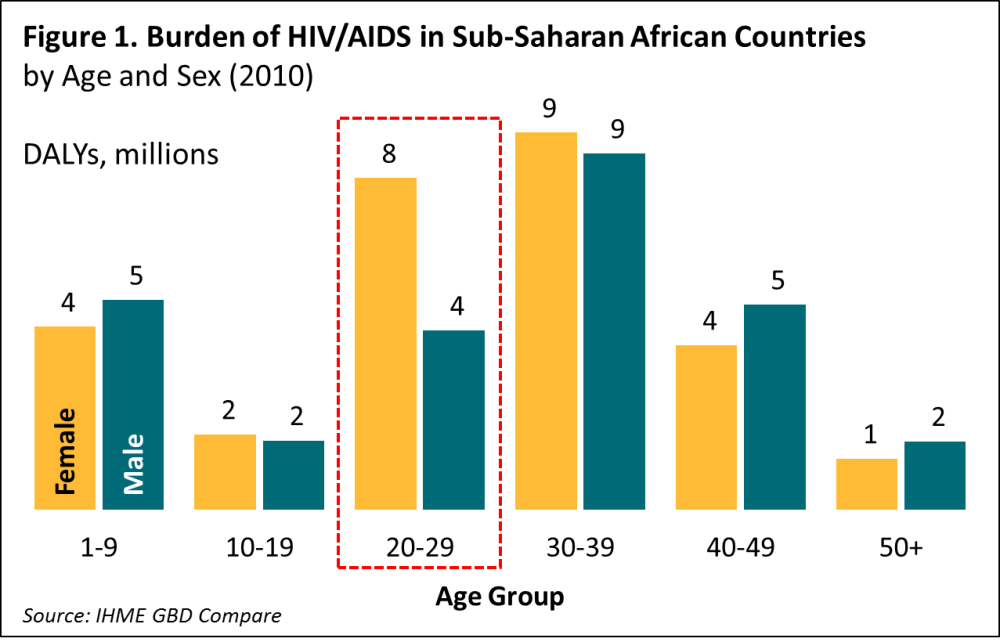 Since the last AIDS Conference, quite a bit of evidence on PrEP has accumulated, but the story is unfortunately mixed. On the plus side, four trials in different populations and regions have demonstrated that oral PrEP reduces HIV infections by a range of 44-75% (Figure 2). This sounds like a major breakthrough—better protection than male circumcision. Unfortunately, two recent trials (FEM-PrEP and VOICE) showed no prevention benefits for the oral and the vaginal versions of PrEP. 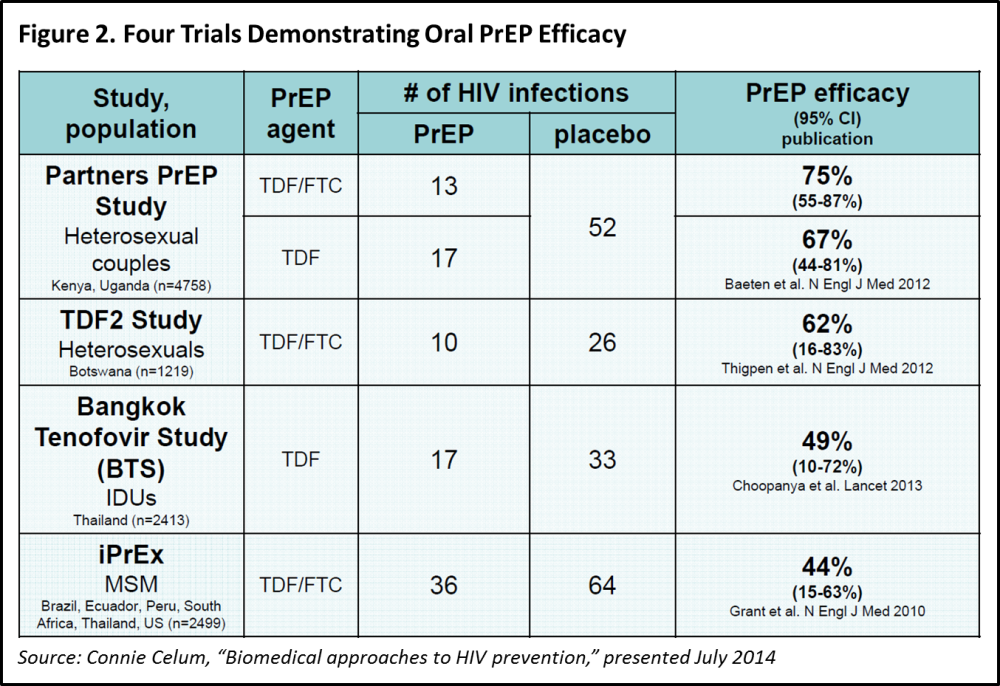 Why would the same technology work under one set of conditions and not under a different set?  Some have argued (page 36; see also Padian et al) that the benefits of some medical interventions have been hidden by ethical review boards’ insistence that individuals in the control arm of a study receive an HIV prevention package which is far more elaborate and efficacious than the package they would ever receive, or sometimes even consent to, in real life.

For example, in the FEM-PrEP trial, the incidence rate of HIV was 4.7% among those using the gel, only slightly smaller than the 5% incidence rate among those in the control group.  But what if the women in the risky population used for the study typically have an incidence rate of 10% or higher, as is the case with some at-risk young African women?  Then the 4.7% looks very good in comparison, especially if the PrEP gel is less expensive to distribute than the elaborate prevention package used in the control group.

If extraordinary prevention in the control arms of these studies is not to blame, the most salient possible explanation for the failure of these trials is that young African women simply don’t adhere very well to PrEP instructions: they don’t take their pills regularly or fail to apply the gel prior to risky sex. These possibilities were the motivation for a University of Washington workshop in early July, which gathered a multidisciplinary team to brainstorm about why young African women might have difficulty adhering to HIV prevention interventions and what kinds of innovative approaches might achieve better results with this group. See my tweets from the workshop for a few sound bites from various disciplinary perspectives.

So, should we bet on PrEP?

Supposing that the problem of inadequate adherence can be solved, where’s the downside to the PrEP innovation?  For one, it’s the cost of providing enough ARV medication to protect a substantial fraction of young African women.  And by “cost,” we mean not only the financial costs of buying and delivering these expensive medications, but also the opportunity costs, measured, for example, by the number of HIV-infected people who will not receive timely treatment when financial, pharmaceutical, personnel and logistic resources are diverted to medicating healthy high-risk individuals. When treatment advocates are calling for doubling or tripling the proportion of the already infected to receive ARVs, can use of these same drugs for the uninfected be justified?