When Will the Fiscal Situation Allow More Aid Spending in the UK? | Center for Global Development | Ideas to Action Skip to main content

When Will the Fiscal Situation Allow More Aid Spending in the UK?

This begs the question: when will the fiscal situation allow?

This blog draws on our new briefing with the Institute for Fiscal Studies (IFS) to answer that question. In particular, we identify the Chancellor’s preferred fiscal measure, look back at the fiscal circumstances in which the target was met historically, and compare these to forecasts from the independent Office of Budget Responsibility (OBR), based on the government’s latest spending plans. While the economy is expected to regain its pre-COVID-19 size in the next year, in the OBR’s estimate, the government’s finances will return to a historically more normal level in 2023.

We argue there is a reputational and value-for-money case for a prompt return to the 0.7 per cent target but, either way, the government should make clear its plans for legislation and the budget or risk abrupt changes undermining its own objectives.

The aid budget and the fiscal situation

As part of its one-year spending review in November, the Chancellor confirmed that aid spending would, in addition to a £0.7bn reduction in aid spending from a smaller economy in 2020, be reduced to 0.5 percent of national income for 2021, creating a very steep fall in the budget from over £15bn in 2019, to just over £10bn this year. In justifying this change, the government argued that maintaining aid spending at 0.7 percent is “not an appropriate prioritisation of resources" given the pandemic, but has indicated that it intends to return to 0.7 percent “when the fiscal situation allows.”

It would have been fiscally possible to maintain aid spending in the pandemic, and around half of traditional providers increased their aid spending. Debt will rise significantly, though the Office for Budget Responsibility (OBR) expect borrowing costs as a share of gross domestic product (GDP) to remain below pre-COVID-19 levels. Still, the Chancellor is committed to only borrow to invest beyond the crisis; and we consider the affordability of the aid budget in those terms.

The government’s preferred fiscal measure is the “current deficit,” which measures the government’s borrowing for “day-to-day” (i.e., non-investment) spending as a share of GDP. The government’s manifesto stated their “policy of keeping the current budget in balance.” This has been a long-standing fiscal target, pursued by previous chancellors of both major parties; Gordon Brown called it the “golden rule,” and it was a key element of George Osborne’s “fiscal mandate.” Although the chancellor has not formally committed to a particular fiscal target, in the 2021 budget he confirmed that “in normal times the state should not be borrowing to pay for everyday public spending.”

The UK’s current deficit has seen a dramatic spike in 2020-21 due to the impact of COVID-19—domestic spending in 2020 increased by some £250bn. But the Treasury’s independent forecaster, the OBR, and others expect the UK economy to recover quickly, returning to its pre-pandemic level in the last quarter of 2021. Alongside the government’s new plans to increase corporation tax, and all other planned changes to taxation and spending, they forecast that the current deficit will quickly fall over the coming years (see Figure 1).

In our new analysis with the IFS, we examine the aid budget and the current budget deficit. 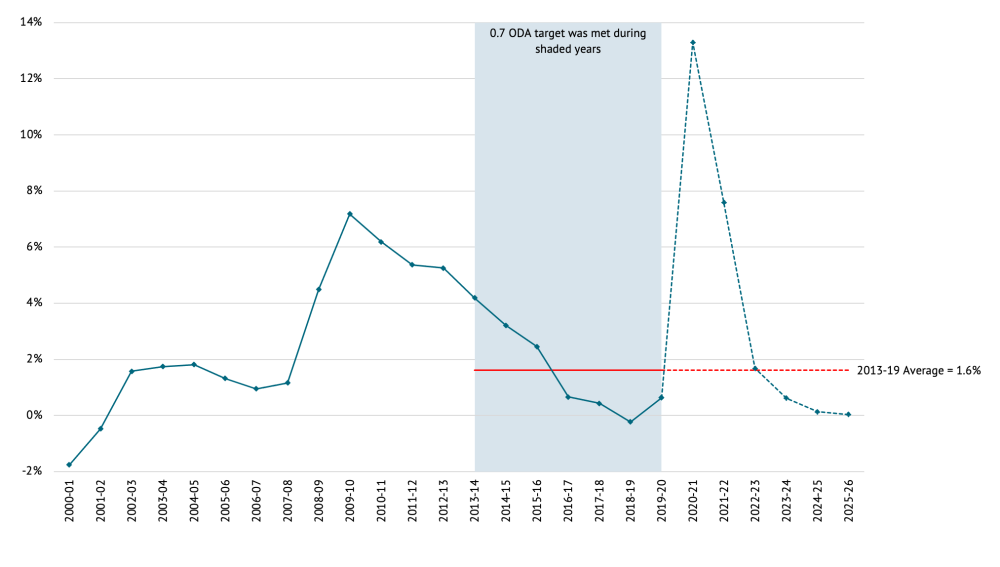 Looking forward, the OBR projects that in 2023-24 the current deficit will fall below both these levels, to 0.6 percent. It appears that the chancellor is aiming for a zero deficit in 2025-26, although this has only been achieved five times in the last 30 years. It was momentarily achieved in 2018-2019 and that followed eight continuous years of economic growth, so this level and timeframe may be ambitious. Still, it seems the chancellor hopes to recover to “normal” pre-pandemic levels before the scheduled end of this Parliament in May 2024.

The UK’s debt is expected to rise significantly, though is not out of line with its G7 peers. Debt as a share of GDP is projected to rise from an average of 81.1 per cent in the seven fiscal years to 2020, to almost 110 percent at its peak in 2023-2024. But debt levels will still be below most of the G7,  including the US, France, Italy and Japan. Still, regardless of aid spending, and even with a balanced budget, the ratio is unlikely to return to pre-COVID-19 levels in the next decade.

The government appears to have three main options for returning to the 0.7 percent target.

Using the current deficit, the clearest candidate for this would be 2023 when, even with an extra 0.2 percent of GNI spent on aid, the UK’s deficit would be around 0.8 percent of GDP, and well below the 1.6 percent seen in the previous period in which it was met. This would imply programming an additional annual expenditure of £4.8bn by that year.

An alternative scenario would be to return to 0.7 percent target only when the budget deficit has been eliminated. The OBR’s projections suggest this could be achieved in 2025-2026, although as this runs into the next Parliament , and the government has not set out detailed spending plans, this may be unlikely. Indeed, this is historically very rare and is a high bar to ask of any public expenditure. This option would amount to spending of 0.5 percent indefinitely, and would likely be no different from a permanent reduction.

Finally, the government could consider returning to 0.7 percent when the economy recovers to its pre-pandemic size, which is expected to be before the start of 2022. On paper this would imply value for money risks as the aid budget followed a very steep reduction with an equally steep expansion; but if announced promptly, in practice it would enable projects and programmes to be paused, rather than cancelled. Along with delaying payments to multilaterals, the government could realise £4 billion in savings, mainly with a delay in outcomes, and potentially alongside some real efficiencies where weaker spending is cut.

As advocates of development and the UK’s leadership role, of course we’d like to see this third option, but it does offer genuine benefits, both in terms of aid effectiveness, and politically in terms of the UK’s ambitions in the United Nations Climate Change Conference (COP) and the G7.

Whichever pathway the Government chooses, committing to a concrete schedule of returning to the target will provide the advance notice necessary to allow planning, improve aid effectiveness, and lower value-for-money risks.

The prime minister has made clear the aid cut is temporary. On the Chancellor’s preferred measure of the “fiscal situation,” normality is expected to return by 2023, and almost certainly within this Parliament. The UK’s leadership role in COP and the G7 would be significantly enhanced by confirming its path back to 0.7 percent, and doing so for 2022 would even offer the prospect of enhancing UK spending going forward.

The sooner the government can provide clarity and commit to a concrete schedule of returning to the 0.7 percent ODA target, the more effective the UK’s aid spending will be, and the stronger its reputation.