USDFC Monitor: Why Is the White House Scuttling its Biggest Development Win? Four Hidden Daggers Pointed at the Heart of the New USDFC | Center for Global Development | Ideas to Action Skip to main content

USDFC Monitor: Why Is the White House Scuttling its Biggest Development Win? Four Hidden Daggers Pointed at the Heart of the New USDFC

The BUILD Act is a remarkable bipartisan effort to modernize the US toolkit to deploy private capital in service of both development and American foreign policy goals. The Act transforms the Overseas Private Investment Corporation (OPIC) into a full-service US Development Finance Corporation (USDFC). At a signing ceremony in October, the White House heralded the Act’s passage as “an important step toward fulfilling the commitment President Trump made to reform the United States’ development finance institutions so that they better incentivize private sector investment in emerging economies.”

So why is the White House gutting the most important features of the new agency?

Thanks to the recent submission of a congressionally mandated reorganization plan and the release of President Trump’s FY20 budget request, we have more clues about the future operations of the USDFC—which is scheduled to open its doors this October. On the surface, the transition appears to be going smoothly: the rhetoric is positive, interagency cooperation seems to be working, and senior OPIC staff have been doggedly gathering input on a wide range of big decisions ahead of the rollout.

Digging deeper however, we highlight four unresolved issues (a number of which were recently flagged by Devex’s DFC-watcher Adva Saldinger) that have the potential to seriously undermine the ambitious vision of the BUILD Act’s congressional champions and USDFC supporters in the White House.

One of the principal enhancements of the USDFC over OPIC was raising its liability limit from $29 billion to $60 billion. This figure was chosen by the authors of the BUILD Act to be large enough to allow for considerable growth of the portfolio and to deploy new capital as an alternative to other (read: Chinese) financing options. But there’s a real possibility that two-thirds of this new financing capacity could be wiped out in one fell swoop. Here’s how: to date, the sovereign loan guarantees (SLG) have been funded through State Department-managed accounts, with USAID holding the portfolio and its Development Credit Authority (DCA) responsible for administering the program. Since DCA will fold into the new agency, the BUILD Act gave the administration flexibility to transfer the SLG portfolio to an “appropriate department or agency.” The reorganization plan, submitted to Congress on March 8, indicates the administration hasn’t yet decided where it will go. Not only does the USDFC make little sense as a home for the program, but if the $21 billion in exposure from existing guarantees (mainly to Israel, Jordan, and Ukraine) are shifted onto the USDFC’s books, they would count against the agency’s liability cap—crippling its new capacity.

Another meaningful upgrade for the USDFC is the inclusion of equity authority. OPIC was frequently hamstrung because of a restriction to only using debt finance. Under BUILD, the USDFC now has limited equity authority, up to 30 percent (of the aggregate equity investment) in any project and up to 35 percent of the total portfolio. Yet, the FY20 budget request includes just $150 million for equity investments, or equivalent to about 4 percent of OPIC’s overall commitments last year. That’s hardly game-changing.

Worse, it appears that OMB is scoring equity $1:$1 against the budget. That is, OMB is making the (wildly illogical) assumption that all equity investments by USDFC will be immediate and total losses. The current proposal treats equity in companies like they are unrecoverable grants, not long-term investments. This literally guts the benefits of the new equity tool and directly undermines the intentions of the BUILD Act authors.

3. The USDFC’s budget is far less than meets the eye. (Warning: this gets deep in the budget weeds.)

For the new agency to meet expectations that it will do a lot more than the old OPIC, its budget will need to increase to cover more staff and other expenses associated with investing more in more places. (Its returns to the US Treasury, which hit $355 million in FY19, should also increase over time.) The FY20 budget request includes $98 million to cover administrative expenses. At first glance, this looks like a roughly 10 percent increase over the $79 million in OPIC expenses plus $10 million from USAID’s DCA in FY19. However, these top line numbers don’t include an estimated $26 million in revenue from fees and other services which OPIC uses to cover project costs separate from direct administrative expenses.* So the appropriate baseline is $115 million ($79m+$10m+26m). This suggests that the new USDFC is facing, not a 10 percent increase in expenses but a 15 percent cut. All the while, the new agency is expected to do more programming and eventually to double its own portfolio.

To make all of this worse, the agency is supposed to invest more, use new tools, have more impact, and be a meaningful counterweight to China. Yet the budget implausibly assumes not one extra staff member.** And OPIC already runs lean—far outperforming its peers on portfolio size per employee. 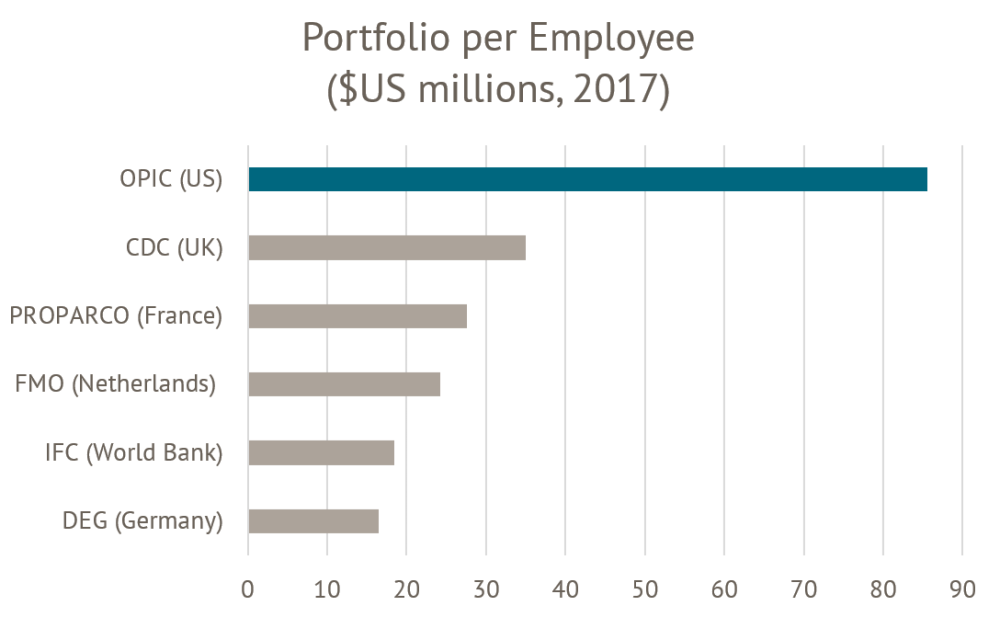 Source: Calculations based on information from DFI’s annual reports

The new agency is being deprived of the resources and flexibility that was intended by Congress. Each of these decisions individually would be a major setback. Combined, these bombshells are nothing less than a full-frontal assault on the new USDFC and Congress’ intent.

*See the FY20 budget appendix for Department of State and Other International Programs, the two lines 25.2 for “other services from non-federal sources” and “other services (working capital)” on page 824, plus page 828 for the merger of administrative expenses and “project-specific transaction costs.”

The USDFC Monitor is a platform for reasoned analysis, practical recommendations, and evidence-based discussion of important issues that will face the United States’ new full-service development finance institution. If you haven't already, you can sign up here to get updates from our US Development Policy and Development Finance teams.