A commission led by the UN's special envoy for education, Gordon Brown, is calling for a doubling of global aid for education, without any clear reform agenda to raise learning levels in the world's failing school systems. That might be ok: bad schools in poor countries still seem to produce big benefits.

Last week the Center for Global Development hosted a panel with three heads of state vying to raise money for three rival education funds. Former UK prime minister Gordon Brown and former Tanzanian President Jakaya Kikwete were there to pitch a new entity they want to set up called the International Finance Facility for Education, aka IFFed, which they're billing as an analog to the widely celebrated Global Fund in health. 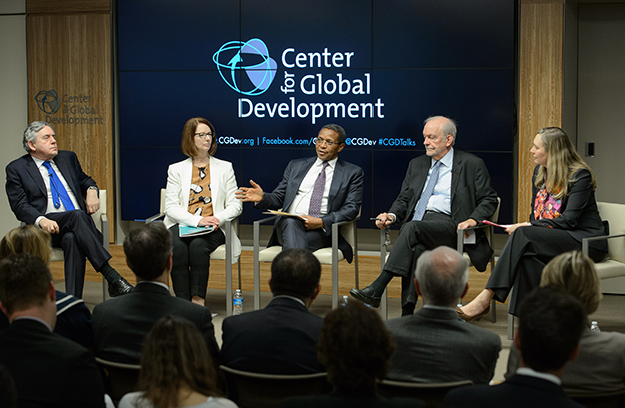 Awkwardly, something "like the Global Fund but for education" already exists, and its board chair was also on stage in the person of Julia Gillard, former Prime Minister of Australia, representing the Global Partnership for Education (GPE), which is also looking for money to replenish its coffers. Luckily, they seem to have agreed on a way to carve up the education landscape:

Now, if only there was any money to divide. Aid budgets are tight these days. All the panelists were members of the U.N. Commission that Brown chaired on financing the U.N.'s Sustainable Development Goals for education. And the one thing all the panelists agreed on was that much more money was needed, both in aid and in domestic spending in developing countries.

Nobody on the panel had any appetite to talk about politically difficult education reforms that might turn money into learning.

Indeed, rather than focusing on the UN's new global learning goals, Gordon Brown and colleagues have shifted their focus to global spending goals. That's a very different conversation: in the unlikely event large amounts of new aid money are forthcoming in today's political climate, they're far from guaranteed to produce learning outcomes. 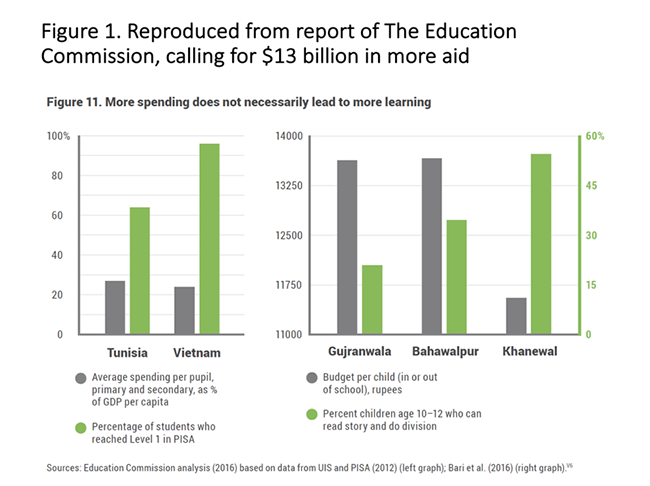 This is something of a departure from the text of Brown's Education Commission report, which dives deep into data and current literature on how to achieve learning for all. It bemoans the 'learning crisis' in many developing countries, reviews effective interventions to overcome the crisis, the need for more and better learning assessment, and notes that more spending often isn't the answer (see Figure 1 which shows Vietnam's high performance and low spending, and the inverse spending-performance relationship in a sample of Pakistani districts). Even as it turns to the question of finance, the report focuses on innovative mechanisms to incentivize reform and a stronger focus on learning.

That was the bait, now comes the switch. In the very last chapter the report turns to its "ask", tallying up why the world needs to raise education spending by $200 billion a year. And in the public discussion of the Commission's work, it's those spending goals—not all the careful analysis of reforming school systems—which now dominate the conversation.

Throwing money at failing school systems is welcome, but unlikely to work. A vast body of research questions the link between education spending and learning outcomes, and some of the best micro research on interventions to improve learning focuses on things that cost zero money, or even reduce education budgets.

In a review of programs to raise learning in the developing world in the journal Science, Michael Kremer, Conner Brannen, and Rachel Glennerster reach a conclusion broadly at odds with the push for money first:

[A]mong those in school, test scores are remarkably low and unresponsive to more-of-the-same inputs, such as hiring additional teachers, buying more textbooks, or providing flexible grants. In contrast, pedagogical reforms that match teaching to students’ learning levels are highly cost effective at increasing learning, as are reforms that improve accountability and incentives, such as local hiring of teachers on short-term contracts.

The things that Kremer et al say don't work are precisely the things the Education Commission is budgeting an extra $200 billion in global spending to expand. In contrast, the promising reforms that the authors describe here tend to have two things in common: first, they're often quite cheap, or even free; and second they're politically difficult.

While the research literature shows a weak link from money to learning gains, it also shows that education in the developing world has amazingly high returns. This is paradoxical. We know that learning levels in poor countries are abysmally low. In an earlier post, I showed that in half of the fifty or so developing countries where we have data, fewer than 50 percent of women who left school after fifth grade could read a single sentence.

Sending kids to school has huge social returns, particularly for girls. Not only are the wage returns to a year of schooling generally estimated at around 10 percent per annum, but more educated women have fewer children and their children are less likely to die. This is somewhat puzzling if school isn't even teaching them to read.

In a background paper for the Education Commission, my colleagues Mari Oye, Lant Pritchett and I show the relationship between girls' schooling and outcomes like women's fertility and their children's survival is significantly higher where schools produce more learning. The correlation between a year of schooling and child survival is roughly two-thirds higher in countries with the highest versus lowest level of school quality.

Looking at the individual level data, women who completed six years of primary schooling had roughly 0.6 fewer children than women with no schooling, and those children were about 5 percent more likely to be alive. But if you focus only on women who went to school and didn't even learn to read—i.e., women seemingly failed by bad schools—they still had about 0.25 fewer children and their kids were still about 2 percent more likely to be alive. 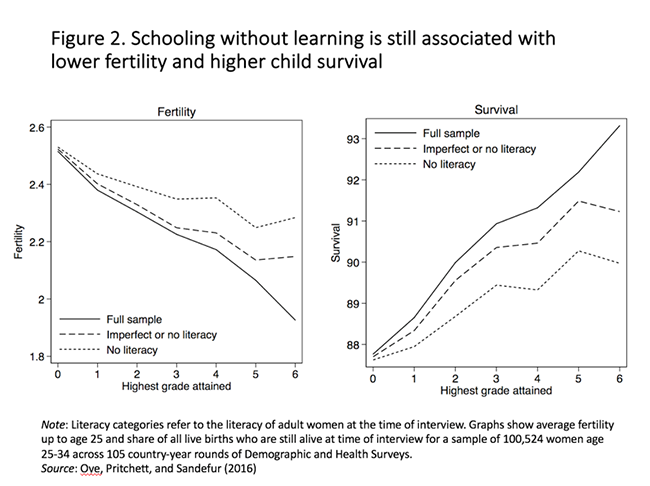 To be clear, these are nothing more than correlations. You can think of lots of reasons more schooling might be correlated with lower child mortality absent any causal mechanism. But there's growing evidence to suggest the return to schooling is indeed causal, based on natural experiments and policy reforms in places where enrollment has expanded in systems that produce fairly dire learning outcomes.

So maybe pouring more money into business-as-usual and low quality education isn't such a bad investment after all.

Counterfactuals: if we spend more on education, what do we give up?

The most intriguing part of Gordon Brown and co.'s pitch is the claim that they can create "new money." The plan is a bit of financial engineering to stretch aid dollars further:

The basic idea, which is a good one, is to as rich countries unwilling to part with much cash during an age of austerity, to lend their credit rating instead. The problem is, it's not an idea unique to education advocates.

Recently, my colleagues Nancy Birdsall and Ngozi Okonjo-Iweala proposed a new, "Big Bond for Africa" in which rich countries would use their aid budgets to borrow at low rates and lend onward to African countries on concessional terms to pursue whatever development needs they want to prioritize—education or other. And my colleague Michele de Nevers and colleagues, including the former treasurer of the World Bank, Kenneth Lay, have proposed a Tropical Forest Finance Facility (TFFF) that would borrow from rich countries to create essentially a large endowment whose returns would fund forest conservation. There's no escaping the fact these are rival initiatives. 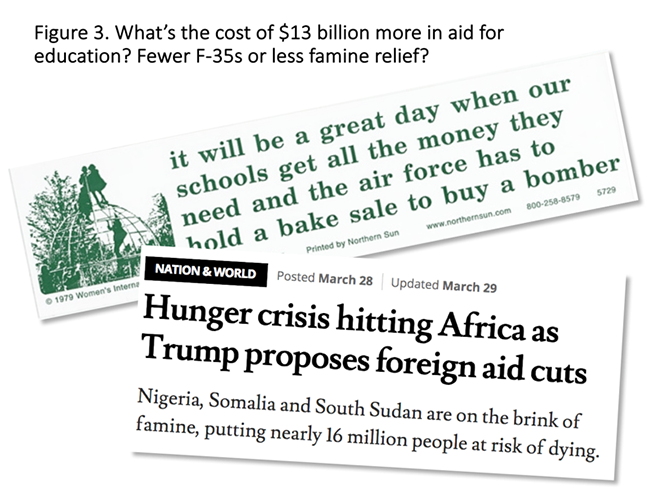 As that old bumper sticker used to say: "It'll be a great day when the schools have all the money they need, and the Air Force has to hold a bake sale to buy a new bomber." If the Trump administration is seriously weighing a new MOAB bomb versus a global fund for education, I'm all for the latter. Sadly, that's not the actual trade-off faced in foreign aid spending conversations in the era of Trump and Brexit.

When aid budgets are tight, advocating for one specific sector like education isn't a question of generosity or a moral crusade, it's essentially just a zero-sum game of earmarking a fixed budget. If that's the game we're playing, education advocates can't duck the conversation about how to generate the biggest learning gains at the lowest cost.

But they will still try. As moderator, my colleague Amanda Glassman opened last week's event with a brief statement about the need for improved efficiency and quality in global education. The panel was unimpressed. When her turn came to comment, Julia Gillard of GPE confessed, "while you were giving your speech about efficiency, Gordon leaned over to me and whispered, 'Yes, but we need more money too.'"

This blog post has been updated to include a correction. The International Commission on Financing Education is led by the UN’s special envoy for education, but it is not a UN commission, as originally stated.