American food aid helps around 50 million people every year, but it could reach millions more. Requiring it to be in kind, purchased in the United States, and transported on US-flagged ships makes food aid less efficient and effective than it should be. President Obama’s FY2014 budget would relax the in-kind and cargo preference requirements and by eliminate monetization—the practice of donating food aid to private organizations that sell it in developing countries to fund their projects. The US Agency for International Development estimates that such reforms would help food aid reach as many as 4 million more people for the same amount of money. We estimate the effect to be even greater: between 4 million and 10 million. The costs of food aid reform are few, but the benefits would be substantial. Now is the time to bring food aid into the 21st century.

The United States is the world’s largest food aid donor, [1] but rising prices mean that the same amount of aid today buys only half what it did a decade ago. At the same time, more people need help because of ongoing conflicts, increased price volatility, and more frequent weather shocks. The solution is to do more with less, and that requires updating a system designed more than half a century ago.

The reforms in President Obama’s FY2014 budget—relaxing in-kind and cargo preference requirement and eliminating the practice of monetization—are a good start. [2] The US Agency for International Development (USAID) estimates that the reforms would get aid to an additional 4 million people without spending any more money. [3] We estimate that number to be between 4 million and 10 million, and the more ambitious Food Aid Reform Act, recently introduced by Ed Royce (R-CA) and Karen Bass (D-CA) as HR 1983, would allow US food aid to reach even more by entirely eliminating the outmoded practices that impede effective and timely responses to food crises around the world. [4]

The Food for Peace program began in 1954. At the time, the US government relied on supply-management policies to prop up commodity prices . [5] When prices were low, the government bought up surpluses and then had to dispose of them, sometimes by donating food overseas. Over time, US agricultural support policies became more flexible, if still trade-distorting, and the United States became a major agricultural exporter. But US food aid remains trapped in this 1950s time warp, where food must be bought in the United States and transported mostly (50 percent) on US-flagged ships.

These restrictions make US food aid more expensive and less timely than it should be, especially as the number direct recipients has dropped from 74 million in FY2006 to an average of 30 million per year over fiscal years 2007 to 2010. [6] Even in emergencies, when time is of the essence to prevent life-altering malnutrition and stunting, US food aid must travel long distances. Various studies suggest that US-sourced food aid takes 70 to 100 days longer to get to its destination than local or regional purchases. [7] And cargo preference requirements add as much as another 40 percent on top of the often unnecessary costs of transoceanic shipping. [8]

US Sourcing, Shipping, and Monetization Mandates Need to Change

The key to making US food aid more efficient and effective is to change the outdated sourcing and shipping requirements. Purchasing food locally or regionally, or providing people with cash or vouchers to buy it themselves, will almost always be quicker than US sourcing, and it will often be cheaper. According to a 2009 GAO report, local and regional purchases by the World Food Programme are a quarter to a third less expensive on average than in-kind US food aid. [9] More recent studies that compare the costs of US food aid purchased locally or regionally against the costs of US in-kind food aid find large savings for local and regional purchases of unprocessed cereals, which make up the bulk of US food aid, and smaller but significant savings for pulses (see figure 1). [10] Procuring vegetable oils and other more processed foods in the United States is not necessarily more costly, even with higher transportation costs. All of these studies compare similar commodities delivered around the same time, in the same countries. 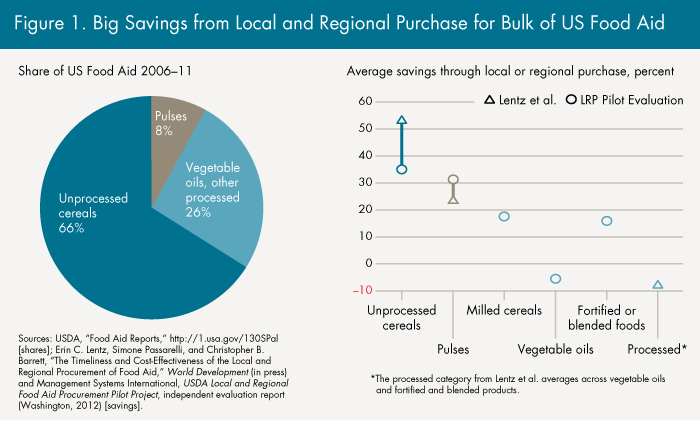 Adding to the inefficiency of in-kind food aid and cargo preference requirements is the practice of monetization, whereby the US government purchases food and then donates it to private voluntary organizations that arrange shipping and then sell it in developing countries to fund their projects. According to GAO estimates, monetization provides projects only 60 to 75 cents of revenue for each taxpayer dollar spent. In the late 2000s, that cost amounted to a total loss of $200 million over three years. [11]

The Obama Administration’s FY2014 budget request would remove these restrictions for 45 percent of emergency food aid ($330 million) and shift $250 million in nonemergency food aid into a new Development Account without in-kind restrictions. The Royce-Bass Food Aid Reform Act would eliminate the restrictions entirely. Both proposals would also end the monetization of food aid. [12]

The Benefits of Even Partial Reform Are Higher Than USAID Estimates

USAID estimates that President Obama’s proposal would US food aid reach an additional 4 million people per year. We estimate the effect to be even greater: between 4 million and 10 million additional people—up to one-fifth more than the roughly 50 million people reached in recent years. Our calculations are explained below. The more ambitious Royce-Bass proposal would maximize the impact of American generosity by eliminating the restrictions that make it so inefficient.

USAID estimates, conservatively, that untying $330 million in emergency food assistance would reduce costs by 20 to 30 percent, allowing the same budget to reach 2 million to 4 million more people. [13] We believe the number could be much higher by allocating the untied funds where they can get the most bang for the buck—on local and regional purchase of unprocessed cereals, which also make up the bulk of US food aid (figure 1). An independent evaluation of the US local and regional purchase pilot program (mandated by the 2008 farm bill) finds 35 percent average savings overall on the purchase of unprocessed cereals, 45 percent savings in emergency situations, where USAID hopes to loosen in-kind restrictions, and 42 percent in Africa, where most US food aid goes; another study shows even larger average savings for unprocessed cereals, in a range of 45 to 62 percent. [14]

Even if we temper these numbers with a conservative estimate of 30 to 40 percent savings, spending the $330 million in untied aid where it matters most could reach 12 million to 14 million people, compared to the 9 million that would be reached under current policy. The additional benefits are due to the estimated cost per beneficiary of emergency food aid falling to between $23 and $27, down from the 2008–12 average of $38. [15]

If we assume less conservatively that the cost per beneficiary with the untied emergency aid will be similar to the lower cost observed for USAID activities using local and regional purchase, cash transfers, and food vouchers under the Emergency Food Security Program, the efficiencies might be much larger. That cost, averaging $19 per person from 2010 to 2012, would allow the $330 million in emergency to reach 17 million people, 8 million more than under current policy. [16]

President Obama’s FY2014 budget would untie the $250 million in nonemergency food assistance by removing the in-kind restrictions and reallocating the money to a new Development Assistance account. USAID says this account will be used for projects similar to those currently funded by monetization. With the estimated costs of monetization for USAID-managed food aid at 25 percent, [17] the reallocation would lower the average cost per beneficiary from $50 (2008–12) to $38. That would allow the same amount of aid to help 6.5 million people instead of the 5 million under current policy.

In sum, combining our estimates for emergency and nonemergency savings, the administration’s reform proposal could expand the reach of US food aid to somewhere between 4 million and 10 million more hungry people. [18] The more ambitious Royce-Bass reform would have an even greater effect by allowing aid officials to purchase food when and where it is most cost-effective to do so. But there are too many unknowns to make an estimate.

Improving Efficiency with Much Needed Flexibility

Food aim reform would save money, time, and lives. It would give aid officials increased flexibility to choose the mechanism that best addresses hunger and malnutrition in a given situation, depending on the type of food needed, how quickly it is needed, and the local market conditions. If local markets are relatively well-integrated and access to food, rather than availability, is the problem, cash transfers or vouchers will often be faster and more effective. When direct food distribution is needed, buying it locally or regionally will be much quicker and may also be more cost-effective .

Local or regional purchase will not always be possible, and the United States, as a major agricultural exporter, will be a source for food aid no matter what happens. But the benefit American farmers reap from the current food aid system is trivial—at most 1 to 2 percent of agricultural exports in recent years. Dropping the US sourcing requirement will not have any discernible negative impact. Similarly, the cargo preference requirement for food aid is a costly and inefficient subsidy. If subsidies to US-flagged ships are indeed important for national security reasons, as some have argued, then the funds should come from the Pentagon’s budget, not from the much more modest sums set aside to feed the hungry.

While the costs of food aid reform are few, the benefits would be substantial. Our estimate suggests that the proposal in the President’s budget would allow US food aid to reach at least 4 million more people in need, and perhaps as many as 10 million, roughly one-fifth more than current policy. Now is the time to bring food aid into the 21st century.

Details of the administration’s proposal are at www.usaid.gov/foodaidreform; for an overview of the Royce-Bass proposal, see Modernizing Foreign Assistance Network, “MFAN Statement: Food Aid Reform Act Would Maximize Efficiencies and Save Lives,” May 16, 2013, http://bit.ly/138uTn1.

Costs and numbers of recipients are from the appendix tables in various issues of the USAID’s annual US International Food Assistance Report (footnote 6); FY2012 figures are from USAID, “Fiscal Year 2012 Food for Peace Fact Sheet,” http://1.usa.gov/11mO4tj.

It is USDA-funded monetization projects that typically net only 60 cents on the dollar; see GAO International Food Assistance (2011).

This calculation ignores $30 million in efficiency gains from ending monetization and $50 million in transfers from the Maritime Administration to compensate USAID for higher shipping costs associated with cargo preference. The analysis in Bageant, Barrett, and Lentz (footnote 8) suggests that the methodology for calculating these transfers frequently understates the actual costs.