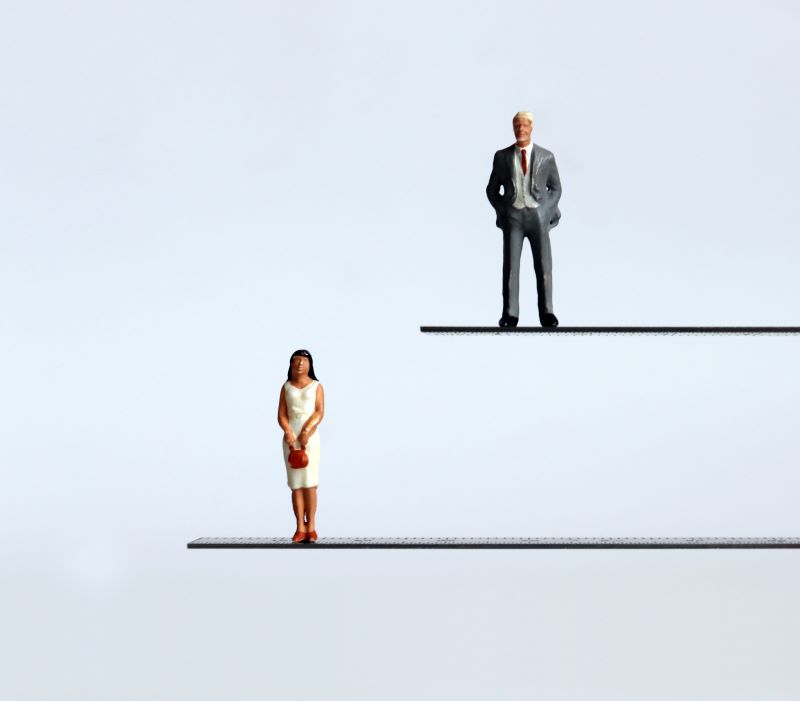 Existing analysis of US think tanks suggests that women are underrepresented among senior staff, leadership, and board members. Chantal de Jonge Oudraat and Soraya Kamali-Nafar at Women In International Security examined 22 Washington, DC-based think tanks working on foreign policy and national and international security, and they found that 68 percent of the heads of the think tanks were men, along with 73 percent of the experts and 78 percent of those on governing boards. In 2018, a random sampling of 10 leading US think tanks working on development by Charles Kenny and Tanvi Jaluka suggested that women made up 30 percent of high-paid employees and 10 percent of highest-paid employees, and that higher-paid women earned only 75 percent that of higher-paid men.

We selected think tanks for analysis based on their presence in the Top Think Tanks in the US as listed in 2017 Global Go To Think Tank Index Report. This selection encompasses all US development think tanks ranked in a separate exercise by CGD’s Alan Gelb and colleagues in 2015 using a methodology initially developed by Julia Clark and David Roodman. We scraped think tank IRS Form 990s from ProPubilca’s Nonprofit Explorer using a suite of R functions made available on Github by Jesse Lecy and Nathan Grasse. The Form 990 is a public document filed with the IRS to provide tax information for charities and other nonprofits. It includes information on financial details, like revenues and payments, as well as information about trustees, directors, and highly compensated employees (HCEs), among other things.

For every available year, we collected data on each organization’s revenues and expenditures in addition to the name, pay, hours, and title of their most highly compensated employees, trustees, and directors. [1] Note the resulting list of employees is not a complete listing because it covers only those individuals categorized as key/high-paid employees. To quote IRS guidance on reporting:

In order to assign a gender to employees, trustees, and directors, we used a dataset built from the Social Security Administration’s application records. Each name (“John”) is matched to a gender (“Man”) with some probability that equals the fraction of social security number applicants with that name (“John”) who were of that gender (“Man”). In cases where the database provided less than a 99 percent certainty that a name was associated with men or women, we manually checked names against think tank websites for gendered pronouns in bios. (Note: unfortunately, we are likely to have misidentified any people who identify as nonbinary).

To measure reputation and reach, we included data both from the Global Go To Think Tank Index and the CGD think tank ranking initially developed by Julia Clark and David Roodman. The two rankings differ in that the Go To Index uses survey responses from “scholars, public and private donors, policymakers, and journalists” to create scores. The CGD ranking uses independently measured indicators of social media reach, academic citations, and media citations. One version of the CGD ranking also adjusts this raw score based on operating budget to create an efficiency score.

We created a measure of partisanship based on think tank descriptions on Wikipedia. If the introductory paragraph classified the think tank as conservative or liberal, this was recorded.[2]

If the description classified the think tank as nonpartisan or bipartisan, or did not suggest any ideological alignment, this was recorded as nonpartisan/none. We also took year of founding data from Wikipedia, supplemented by organizations’ websites when necessary. 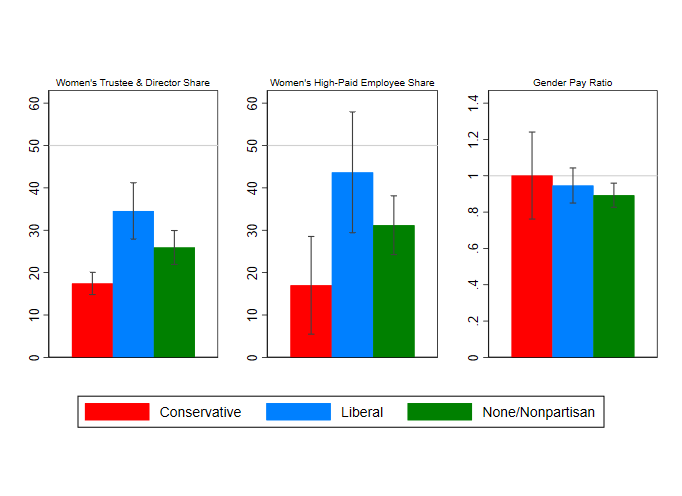 Among the 43 think tanks with information available in 2011 and 2016, women’s share of trustees and directors increased marginally from 23.5 percent to 26.2 percent. Their share of highest compensated employees increased from 29.3 to 32.7 percent. Meanwhile, the gender pay ratio (women’s pay as a share of men’s pay) moved from 0.87 to 0.93. On those (linear) rates of progress, parity in the number of trustees and directors would occur around 2060, in the number of high-compensated employees around 2041, and in pay of high-paid employees around 2022.

Think tanks with greater recognition perform worse in terms of pay equality. Both the 2017 Global Go To Think Tank Index and the unadjusted 2014 CGD rankings correlate positively with the gender pay ratio, indicating that the best ranked think tanks have less equitable pay.[4] Moreover, a significant, positive correlation holds between the year of founding and average gender pay ratios, demonstrating that older, more established think tanks are less equal. This correlation does not appear to be a function of wealth, as no significant relationship holds between assets or revenues and pay ratios. We also examined whether woman-led think tanks see greater pay equality among senior staff (excluding the president/CEO herself). The result was insignificant. 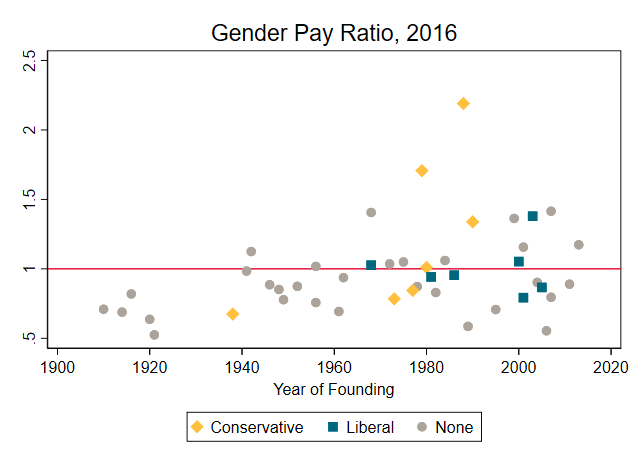 Table 3. Equality by year of founding 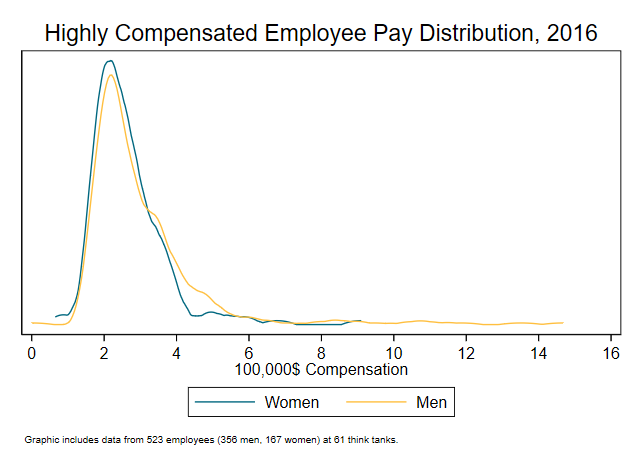 We have found the gender pay ratio at think tanks averages .92. Women are paid less than men relative to their representation. A graph of the highly compensated employee pay distribution across think tanks (Figure 3) illustrates a long right tail on the pay distribution for men that outstrips that of women by a significant margin. Therefore, it seems likely that these few highest-paid men are at least partially responsible for the skewed pay ratios. A closer look at the data reveals that these men occupy very high-ranking positions at their respective organizations. Thus, part of the cause for pay inequality may be that women are (even more) underrepresented among the highest-ranked positions at think tanks. Additionally, we observe that, even before reaching the right tail, a higher fraction of men are paid salaries in the $375,000-500,000 range. This observation is consistent with the idea that, even conditional on advancing to high-ranking positions, women still earn less than men. [5]

To address the first theory, we can look at gender representation in different senior positions. Each position is defined using the “title” field included in IRS Form 990 Schedule J, which is widely available from 2013 on. It is not evident that women are dramatically underrepresented in the highest-ranking positions—president/CEO and vice president—compared to their representation in all highly compensated positions (2017 data is limited and so should be treated with caution). Figure 4 demonstrates that women appear to be relatively overrepresented among vice presidents, and their relative representation among presidents fluctuates year to year. Generally speaking, they are relatively underrepresented among directors and fellows. 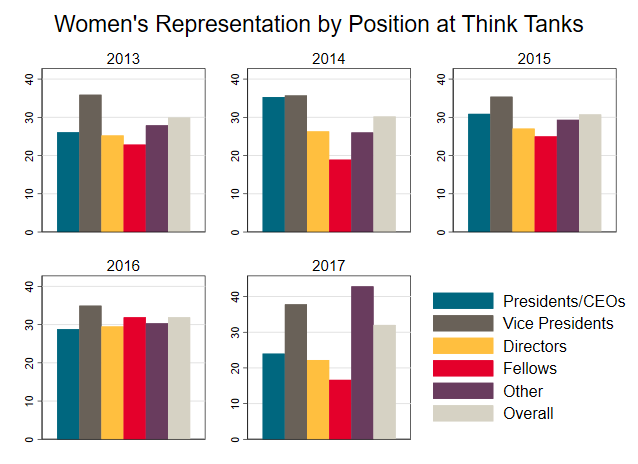 Even though women remain underrepresented across all senior positions, there is no clear relationship between their share in a position and the seniority of that position. That suggests representation at the very highest levels is not an immediately obvious driver of pay inequality among highly compensated employees.

Are highly compensated women paid less than highly compensated men with the same job title? Figure 5 displays kernel density estimates of pay distributions for each title. At the highest levels (president, vice president, and miscellaneous high-ranking “other HCEs”), men have a much longer right tail in their pay distribution, and a higher fraction of them are making salaries above the mean. 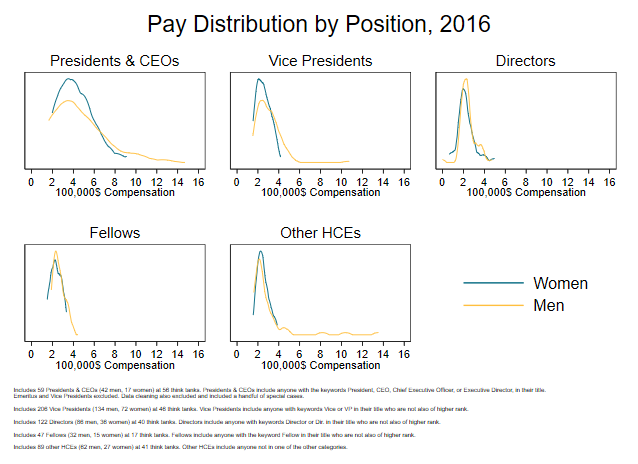 To further examine the role of different representation at senior levels as opposed to different pay within those levels on pay inequality, we regress individual compensation on organization, position, and gender fixed effects. We do this for each year with sufficient data (dropping 2017) and report all coefficients except organization fixed effects and the constant.

This regression is not well identified, but it still permits us to make descriptive statements. Specifically, we can see that men are paid on average over $30,000 more per year even conditional on position and institution. The income distribution graphics and the regressions lend credence to the idea that pay inequality at the same job title in the same institution is responsible for at least some considerable portion of skewed pay ratio.

Top US think tanks as measured by reputation remain considerably imbalanced in terms of gender representation both on boards and at all levels of senior leadership positions. And even among senior leadership, women are paid less than men. Given that think tanks are set up to provide leadership in terms of public policy, this imbalance is especially problematic, potentially spilling over into the focus and content of policy recommendations and advocacy. Greater gender equality should be a priority for the sector as a whole.

[1]Throughout this document, we use the terms “high-paid,” “highly compensated,” “highly paid,” and similar variants, interchangeably. They always denote individuals who met the definition provided here and who were included in Schedule J of the IRS990 Form.

[3] These two figures (1,100 and 2,400) rely on deduplicating names by string matching. We dropped all nonstandard characters, middle initials, and titles in addition to putting all names in lowercase. Then we dropped duplicate names to arrive at these figures. They will be skewed upward by idiosyncratic spellings (including or excluding a middle name, typos, etc.) and skewed downwards by different individuals with the same name. Additionally, a person who is affiliated with multiple organizations will likely only be recorded once.

[4]To be clear, a “higher” rank (e.g. 80th) is  a worse rank.  Therefore, a positive correlation between rank and pay equity implies that the higher (i.e. worse) the ranking, the higher (i.e. more equitable) the pay ratio. Additionally, the budget-adjusted 2014 CGD rankings correlate positively and, in the case of highly compensated employee shares, significantly, with our measures of women’s representation.