Next week, the G-20 Leaders will meet in Antalya, Turkey, to continue their conversation about the importance of financial inclusion in achieving strong, sustainable, balanced economic growth. One item on the agenda will be the cost of remittances. In 2009, G-8 Leaders set a goal of reducing remittance costs to 5 percent within 5 years, roughly a 5 percentage point decrease. Instead, the cost of sending remittances from G-20 countries to “high risk” countries has stayed almost flat, and to “less risky” countries, has decreased slightly more than 1 percentage point.

Last week, the Financial Stability Board (FSB) — which coordinates and reviews the work of the international standard setting bodies in the area of financial regulation — published a report to the G-20 stating that in a survey carried out by the World Bank, roughly half of emerging market and developing economies have experienced a decline in correspondent banking services, which allows for banks to make and receive international payments.

In other words, despite the laudable G-20 policy goal of achieving more inclusive economic growth, there appears to be a disturbing trend of banking services declining or, at least, not becoming more cost effective for some countries. Why do we see these trends in remittance costs and correspondent banking relationships? A new CGD report — the outcome of a working group of policymakers, academics and individuals from the private sector — says that one reason (and we emphasize that it is not the only driver) might be that these trends are the unintended consequences of anti–money laundering / combating the financing of terror (AML/CFT) policies in rich countries.

Under current AML/CFT rules, banks are asked to prevent sanctions violations and assess and mitigate money laundering and terrorist financing risks, or face penalties. However, regulators sometimes send mixed signals about whether and how banks and other entities should manage these risks, which can result in simplistic risk assessment methodologies being applied by these entities. There may also be a chilling effect resulting from the imposition of legitimate fines on some large banks for egregious contraventions of AML/CFT rules and, particularly, sanctions laws. These factors, along with others, have led banks to adopt an understandably conservative position.  This includes exiting from providing services to firms, market segments and countries that are seen as higher risk, including money transmitters, banks in poor countries and non-profit organizations.

Let us illustrate our findings with an example. In 2013, Barclays closed the accounts of nearly 90% of its UK-based money transfer organizations. It was the last large bank in the country willing to provide accounts to the money remitters that are a lifeline for migrants trying to send funds to families in poor countries. This wasn’t the first time that a bank decided to withdraw nearly wholesale from the remittances sector — a process known as ‘de-risking’  (see Figure 1). Nor will it be the last.

At a time when remittances are worth more than three times total foreign aid flows, these kinds of actions could have a significant impact on individuals — and entire countries. It’s not just migrant worker families that suffer from ‘financial abandonment.’ As stated earlier, banks in poor countries find themselves cut off from correspondent banking services:  trade finance, clearing and settlement, cash management, and international wire transfers; while non-profit organizations (NPOs) are often unable to obtain banking services thereby hampering their work, especially those NPOs associated with ‘high risk’ areas that are often home to the world’s poorest and most vulnerable people. 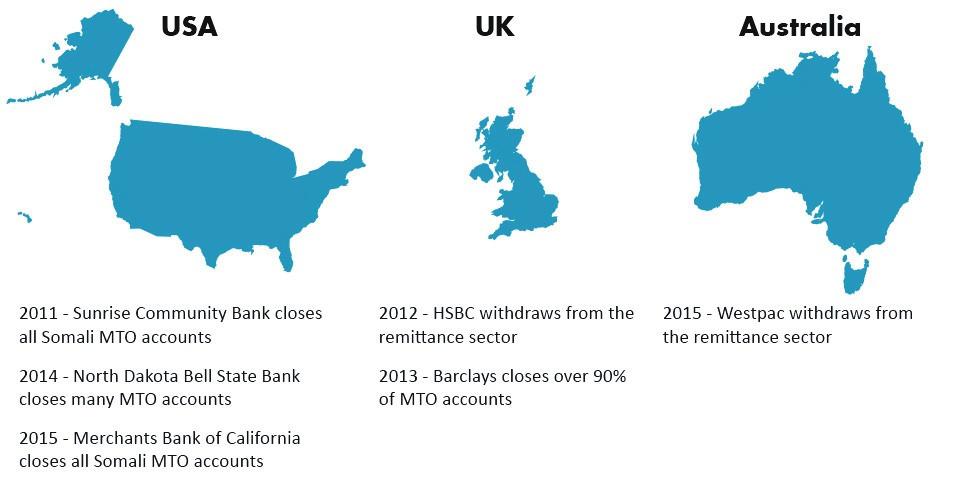 Such unintended consequences are causing concern at the highest levels: both Federal Reserve Chairwoman Janet Yellen and Bank of England Governor and Financial Stability Board Chairman Mark Carney acknowledge the very real problems of de-risking. Standards setters, such as the Financial Action Task Force (FATF, the global standard setting body for AML/CFT), and regulators have acknowledged the existence of de-risking and are starting to work to address it. In the meantime, the losers are manifold.

Who are the losers?

Podcast on AML/CFT with Clay Lowery and Vijaya Ramachandran

Our report puts forward five recommendations that would require action by national regulators, international standard setters, international organizations, and private institutions to work toward a solution.  These are the first steps that must be taken toward solving the problem:

When the G-20 Leaders gather in Turkey, they will consider how the AML/CFT system can be made stronger and more effective. They should also address the unintended consequences of AML/CFT, even while preserving and strengthening national and global security.

How to Destroy a Country: Does Ethiopia Have a Future?
Mark Lowcock
October 06, 2021