Australia and New Zealand: Building on a Migrant Foundation

This is the seventh in a series of blogs looking at regional aspects of future global demographic and migration patterns discussed in my paper Global Mobility: Confronting A World Workforce Imbalance. You can read other blogs in the series here.

Australia was home to 7.5 million migrants in 2019 (out of a total population of 25 million) and New Zealand around one million out of a population a little shy of five million. The two countries demonstrate the considerable economic and social advantages of welcoming both temporary and permanent migrants, not least that per capita incomes climbed about 60 percent in the two economies between 1991 and 2020 compared to 48 percent in high-income economies as a whole. Richer countries with a particularly strong record of supporting worker mobility—countries including Australia and New Zealand but also Canada, Singapore, and the United Arab Emirates—will also have an easier time confronting a demographic transition towards a growing population of old-age dependents. But this doesn’t mean there is no need for policy reform, something demonstrated during the COVID-19 pandemic.

Under the United Nations medium forecast, both Australia and New Zealand will see a slightly higher working age population in 2050 than 2020—by about 20 percent in Australia and 9 percent in New Zealand (in Figure 1, the gray bars depict the percentage change forecast for the population aged 20-64 between 2020 and 2050). At the same time, old-age dependency ratios will climb: from around 28 percent to just above 40 percent in both countries (in Figure 2, the teal bars show the change in predicted old-age dependency ratios 2020-2050). That will lead to a “worker gap”—a measure of the number of additional working age people required to keep the total dependency ratio (those under 20 and over 64 as a percentage of those 20-64) the same as it was in 2020. The teal bars in the first figure depict the scale of this “worker gap”: it is 15 percent of forecast working age people in 2050 in New Zealand and 16 percent in Australia. 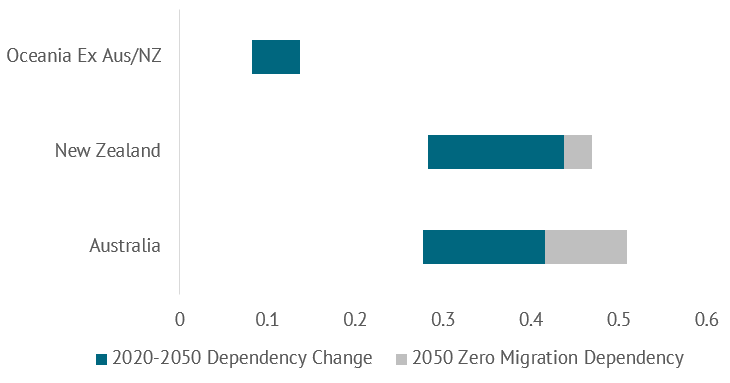 That said, those worker gaps percentages compare to forecasts of 37 percent in Germany and 20 percent in the UK or 37 percent in Japan and 115 percent in South Korea. And a major reason for their comparative manageability is the past and future impact of migration on dependency ratios. The gray bars in the second figure depict how much larger the 2050 old-age dependency ratio would be under the UN zero migration forecast: it is 9 percentage points larger in Australasia and 4 percentage points larger in New Zealand.

More from this series
The Gulf Migration Model: Can It Be Sustained?
Helping People Move to Jobs in South America

Despite a comparatively healthy demographic position, the two countries could still do better: attracting more people as part of a strategy to further close the worker gap. An obvious source for workers is other countries in Oceania. Most are still in the earlier stages of the demographic transition, one of falling dependency ratios and a rapidly rising working age population—and they are struggling to generate the number of good jobs jobseekers will demand. In 2050, the average old-age dependency ratios across the region outside of New Zealand and Australia will still be as low as 14 percent, and working age populations will increase by 67 percent. (In addition, many of these countries face serious economic challenges related to climate change and rising sea levels.)

But the Pacific has seen limited success in promoting intra-regional migration (either temporary or permanent). For example, Australia’s Pacific Training Coalition is a vocational education program designed to provide Pacific Islander participants with the skills to fill jobs in Australia. Government reviews suggest it has had limited impact, with high joblessness amongst those who graduate without a position to return to (though reform efforts are underway).

Furthermore, a pandemic that has had thankfully minor effects on health in Australia and New Zealand has still extracted a high price in the costs that come from closing borders. Half a million migrants left Australia between the start of the COVID-19 pandemic and mid- 2021 according to a recent parliamentary report, which also noted “a lack of skilled migrants and near-record-low unemployment has resulted in major labour shortages, in areas including engineering and agricultural technology." Migrants make up 80 percent of Australia’s harvest workforce but the country’s demand now extends to auditors, surveyors, doctors, engineers, nurses, software engineers, social workers, miners, and chefs (there may be as many as 8,000 too few in the country). New Zealand, meanwhile, is facing construction delays, restaurant closures, delays in vehicle inspection, and sick animals as a result of worker shortages. And the two countries are busy trying to poach farm workers from each other.

A world of greater movement of people is one where the importance of shutting pandemics down before they spread takes on ever greater economic significance, and part of ensuring global benefits from addressing the world workforce imbalance will be far better global coordination around surveillance and response. Australia and New Zealand, two countries that have seen first-hand the cost of population autarky as a response to COVID-19, should be leading global efforts in that direction as they expand opportunities for mutually beneficial worker mobility.

Blog Post
The Gulf Migration Model: Can It Be Sustained?
Charles Kenny