Outside the EU, the UK Government would need to find a new home for the £1.3bn[1] or so of Official Development Assistance that it currently directs through European Institutions every year. Priti Patel, the new UK Development Secretary has already indicated she expects funding to be used “cost-effectively, transparently, and with a proper focus on results and impact.” This post looks at the broad options, and where that aid might be best-spent.

The UK is the world’s second largest aid donor (OECD DAC, 2014), and our recent blog post  noted that almost 10 percent of that budget is spent via EU institutions. This is part of the UK’s commitment to spend 0.7 percent of national income on development. There are myriad proposals to reallocate £1.3bn in eye-catching ways, and there could well be a scramble amongst specialist NGOs and lobby groups to prioritise particular topics, but here we aim to take a more strategic look.

There will be an appetite to show that aid can be spent with more development impact than the EU achieved, and with more co-benefits for UK interests. UK officials will also be mindful that they rely on the EU to channel aid to countries where the UK does not have bilateral programmes, but which are historically important to the UK (e.g. small island states in the South Pacific or Caribbean) or where political relationships are strained (e.g. Eritrea). Constrained staffing levels for DFID and other UK Departments will also shape decisions.

First, the UK could continue to allocate funding to EU institutions (that is, the European Commission or the European Development Fund, or successor funds). This isn’t suggesting the UK stays in the EU and there’s no precedent for non-EU members contributing directly but this could be an area where the UK could continue to contribute to the EU’s budget (for example, as part of a deal on market access).

How effective is current EU spend? EU institutions (in red and blue below) scored well using the most recent Quality of ODA (QuODA) assessment by the Brookings Institute and CGD (which we hope to update it next year). Still, the World Bank (IDA in Green) scored more strongly, especially on transparency & learning and fostering (recipients’) institutions. 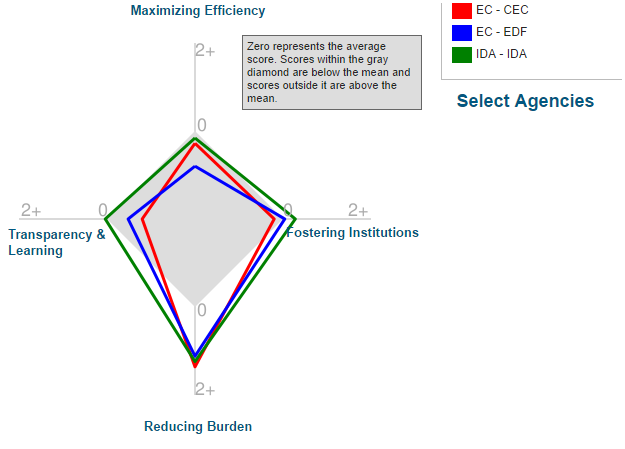 Spending via EU institutions may also mean the UK retains its influence over the rest of the €10bn the EU spends. This would likely shape those funds towards poorer countries, improve transparency and learning (including impact and results) but perhaps hold the EU back from better coordination (where the UK has been a blocker on “joint programming.”)

DFID’s recently released review of multi-lateral development takes a similar view on the EU’s organisational strengths, which are just behind those of the World Bank, and scores amongst the top 3 on alignment with UK objectives (see Figure 2). In short, the quality of EU aid sets a fairly high standard for effectiveness.

A second alternative then would be to channel more funds to multilateral agencies such as the World Bank, GAVI, or UNICEF. The UK’s share of ODA via multilateral agencies dropped to 37 percent in 2015, below the OECD average of almost 40 percent. The UK has traditionally placed a high weight on multi-lateral spending which also has the feature of minimising administration costs in DFID. A potential downside of this approach is that the “mutually beneficial” nature of the aid is less visible but it may actually be the most effective in reducing poverty. The UNDP scores lower and more unevenly on effectiveness, but is an attractive channel where sensitivities put a premium on political neutrality. In terms of the Brexit vote, parts of the Leave campaign suggested strengthening links to the Commonwealth. Still, a poor way to achieve that would be via The Commonwealth Secretariat (Comm Sec) which scored badly in both 2013 and 2016. 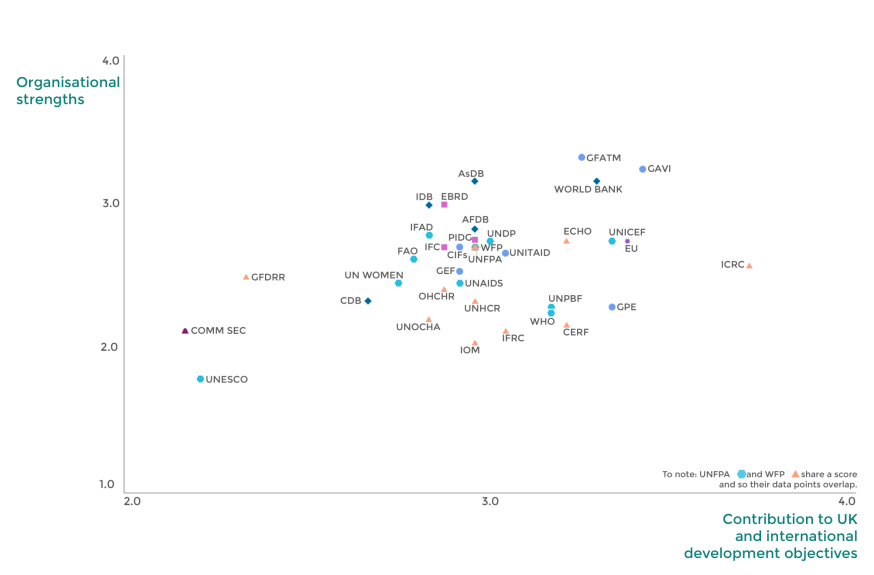 A third idea is that the UK might extend the geographical footprint of its bilateral programmes to cover more developing countries. Given the issues with aid fragmentation and coordination that already exist (see OECD), it’s hard to see the case for this, though having an extended DFID or foreign office presence could enhance the UK’s influence, or “soft power.”

A fourth option is a variant of the third. The UK could direct its funding into countries and programmes the EU pulls out of following loss of UK ODA. Whilst mimicking EU spend is unlikely to appeal to Ministers, it’s likely there will be some countries—potentially Commonwealth African ones—that will lose EU funding in programmes that are well-established and providing strong value.

A fifth option is to substantially increase the volume of ODA devoted to business investment. An obvious vehicle for this would be via CDC, the UK Development Finance Institution. The Government is raising the ceiling on what it can invest via this route. A full discussion is beyond this blog but our view is that such an investment should be based on its merits not arbitrarily capped by a legislative ceiling set in 1999, nor dictated by a Treasury target for spend that doesn’t score as public borrowing. CDC should also offer the same transparency and scrutiny as the UK’s other aid spend, including featuring in future aid reviews. DFID has traditionally allocated funds designated as ‘capital’ to CDC, but there is no reason why CDC could not receive ordinary grant funding as well. But there are caveats: it may be difficult to achieve key development targets (e.g. public health, climate adaptation) using business investment alone. A substantial role for continuing grant aid is likely.

Finally, the UK could strategically prioritise new areas or substantially strengthen existing areas for additional funding. One could write a 6-month review on that question alone, but there are some strong potential candidates based on the UK’s comparative advantages and national interest which have the potential to address global and development challenges.

With any repatriated EU money unlikely to actually arrive until 2019 at the earliest, now is the point in the policy cycle for radical and innovative thinking followed by prioritisation, and more careful appraisal. CGD will be articulating some of our ideas in the coming weeks.

In conclusion then, the six broad options are not mutually exclusive and offer a choice between effectiveness, for example through multi-lateral funding; influence over Europe’s substantial funding; or potentially riskier but more distinctive new priorities. If UK ministers are attracted to new areas, they will need to use the lead-time for the extra funding to spend well and not make decisions on the hoof in 2019 to ensure aid spend works for both recipients and the UK.