Worldwide military spending as a percentage of GDP in the years since the Global Crisis has been at nearly half its level during the Cold War. This column identifies three groups into which spending has been converging. It also shows that external threat levels are a factor in determining military spending, but only in developing economies. The results suggest a significant peace dividend from reducing internal conflicts, with a country that moves from the bottom 25% to the top 25% of developing countries on political stability and the absence of violence/terrorism likely to reduce military spending by about half a percentage point of GDP.

Worldwide military spending has nearly halved from 3.6% of GDP during the Cold War period (1970–90) to 1.9% in the years after the Global Crisis (2010–18) (Figure 1). A key question, then, is are countries converging to a common, lower level and what could drive further reductions in these outlays? Many argue that additional reductions in military spending would be a positive, given budgetary pressures arising from changing demographics and the spending needs in developing economies for achieving the Sustainable Development Goals (SDGs) by 2030 (Gaspar et al. 2019). Using the method developed by Philips and Sul (2007), we assess whether military spending is converging and report on new econometric results of the drivers of military spending (Clements et al. 2019).

(as a percentage of GDP)

Note: Military expenditure as percentage of GDP calculated as the unweighted country average within each country group, developing economies (DE) and advanced economies (AE). Data for 1991 on a global basis are not available due to the breakup of the former Soviet Union.
Source: Stockholm International Peace Research Institute (SIPRI).

An advantage of the approach developed by Philips and Sul is that it can help assess convergence without dividing countries into subgroups based on prior information (e.g. geographical location, income level), which has typically been done in earlier studies of convergence in military spending based on estimates of sigma and beta convergence tests (Arvanitidis et al. 2014).

Our results reveal that global military spending is indeed converging, but into three separate groups, two of which are falling at different rates and a third with rapid increases (Figures 2 and 3). Groups 2 and 3 follow the same downward trend after 1990, but at different rates. Group 2, the largest, accounts for 94% of global military expenditure and consists of 98 countries – including 30 advanced economies. Average military outlays in relation to GDP fell significantly in those 98 countries from 1990 through the mid-2000s but have changed little since then. This group includes several of the top 15 military spenders (in absolute terms) such as China, India, Russia, the UK, and the US. The next group, Group 3, accounts for merely 2.2% of total global military expenditure and consists of 27 countries, only two of which are advanced economies -Lithuania and Slovenia. Unlike Groups 2 and 3, Group 1 trends upward. However, this is the smallest of the three groups, consisting of only 13 countries, two of which are advanced economies, and accounting for 4.1% of global military expenditure. This group includes Oman, Libya, and Saudi Arabia.

Figure 2. Average military expenditure as a percentage of GDP in each group, 1970–2018 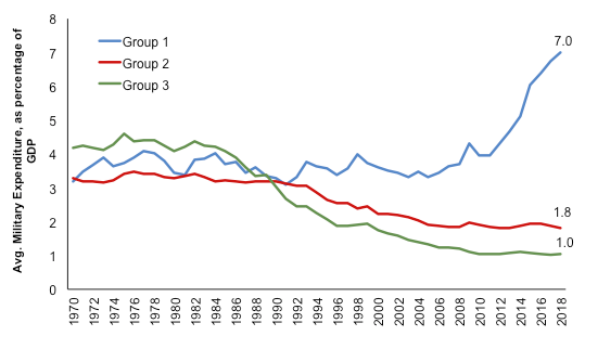 Note: USSR is not included in the above analysis and Russia is included after year 1991.
Sources: SIPRI, IMF World Economic Outlook, and authors’ calculations. 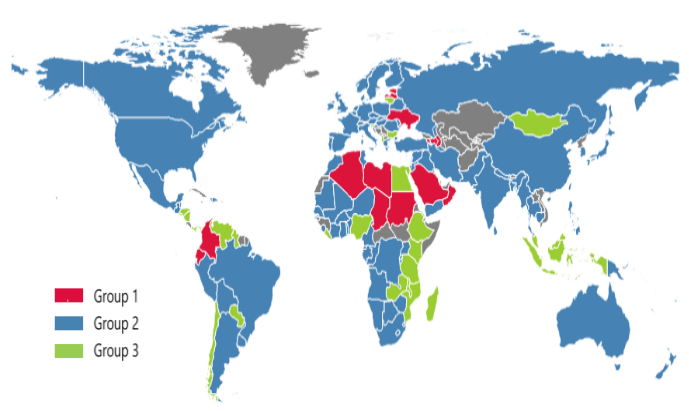 The uneven decline in military spending raises the question about what influenced these outlays over the past four decades and what this suggests for spending going forward. To assess this, we employ an error correction model that can separate both the short-term and long-term effects of different factors driving military spending.

Our econometric analysis found that internal security concerns are an important driver of military spending. Surprisingly, this relationship holds in both advanced and developing economies. The results suggest a significant peace dividend can come from reducing internal conflicts, which are still high in some developing economies. For example, a country that improved from the bottom 25% to the top 25% of developing countries on political stability and the absence of violence/terrorism would, over the long run, reduce military spending by about half a percentage point of GDP – a major saving.

The results also suggest that social spending does not crowd out defence outlays in advanced economies but does in developing countries. The long-term coefficient estimates indicate that vigorous increases in social spending to meet the SDGs would put significant pressure on defence spending. An increase in social spending of 5 percentage points of GDP, for example, would cut defence spending by one half percentage point of GDP over the long term – a sizeable decrease in many developing countries, including in sub-Saharan Africa, where this would cut spending by more than a quarter from present levels.

Our results show that there is indeed convergence in military spending, but into three distinct groups. In the countries accounting for over 90% of global military spending, outlays have fallen from their Cold War levels but appear to have plateaued at an average of around 1.8% of GDP. In a small group of countries, conflict has driven increases in outlays to a substantially higher level (about 7% of GDP), while in a group of primarily developing economies spending has fallen from around 3% of GDP in the pre-Cold War era down to about 1% of GDP.

Clements, B, S Gupta, and S Khamidova (2019), “Is Military Spending Converging Across Countries? An Examination of Trends and Key Determinants,” IMF WP 19/196.