DFC Puts Its Foot on the Pedal

On June 3, DFC held its second board meeting, approving 12 investment projects and two technical assistance projects for a total of $1 billion. The board meeting included approval of DFC’s first seven equity investments, totaling $165 million, and a commitment to a public target for investment in low- and lower-middle-income countries.

The second batch of board projects are regionally diverse and span a wide income spectrum. They are also heavily sector focused on financial inclusion and growth capital for firms. DFC also published information about the agency’s smaller investments—which can advance without a Board vote—so we also now have a better sense of how DFC is building on OPIC’s existing portfolio.

Below, we’ve analyzed what these new projects mean for the US government’s new investment arm.

Signs of progress on LMIC portfolio

In his public remarks ahead of the board meeting, DFC CEO Adam Boehler affirmed the agency’s target of growing its portfolio to 60 percent in LICs and LMICs. This is an important step that commits the agency to an ambitious program in poor countries.

While it’s hard to determine the exact income composition of the June board-approved projects, as many investments are channeled through funds that straddle various income categories—our back of the envelope calculations suggest that more than 60 percent of financing still went to UMICs.

But the broader portfolio of DFC-approved projects so far this year—which includes smaller investments that don’t require board approval—paints a different picture.

UMICs comprise approximately 45 percent of DFC’s overall investment volumes. While this doesn’t place DFC at 60 percent in LICs/LMICs yet, it indicates a positive direction of travel. 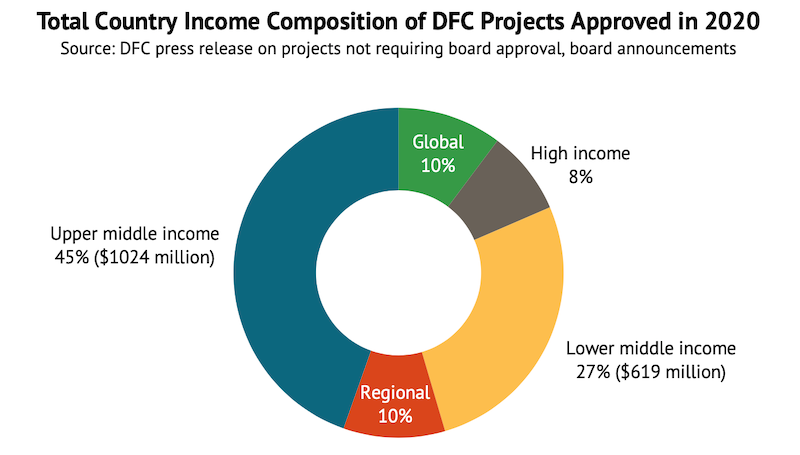 Most of the board-approved UMIC projects are focused on financing for small and medium-sized enterprises, and some have robust gender targets. However, two of the UMIC projects only get a “positive” development impact rating, less than the “high” rating assigned to other projects.

Given the BUILD Act’s emphasis on investments in lower-income countries, our view is that UMICs should clear a higher development impact threshold . To this end, DFC should consider adopting the stoplight proposal developed by our colleague Todd Moss to assess the overall balance of its portfolio against its development mandate.

While funds often require DFIs to pay fees to compensate fund managers, they also allow institutions to avoid the costly internal monitoring capacity required to do direct equity. Most DFIs maintain a combination of direct and fund-managed equity investments. It’s also notable then that one investment (in an Indian e-commerce food company) is in the form of a direct equity stake. As DFC deepens its equity expertise and expands its staff capacity, we anticipate more direct equity investment moving forward.

Use of financial intermediaries

The majority (10 out of 12) of this quarter’s board approved investments either go through a fund or another financial intermediary, like a local bank. This trend may likely be limited to this batch of projects which are heavily skewed towards financial inclusion and growth capital.

Finally, on transparency, DFC deserves credit for posting all projects pending approval ahead of the board meeting. As previously noted, the agency also released information on the projects it has approved since the March board meeting on an absence-of-objections basis.

DFC has an opportunity to cast itself as a leader of the DFI pack on transparency issues. As a next step, DFC should think about how it can make development impact information, including individual project IQ scores and a narrative explanation of the score, publicly available. This would set a high bar for the DFI community.

DFC put its foot on the pedal in its second board meeting. It is starting to lay the groundwork for a portfolio that is more skewed towards the difficult markets where its development dollars can have most impact. Over the coming months we also hope to see a portfolio expansion in LICs commensurate with the growth in LMICs. And DFC needs to set a high-bar for projects in UMICS, and Todd Moss’s traffic light system could be a useful tool for the agency.

Blog Post
“Sad:” The US Is Backing a US Citizen to Head the Inter...
Nancy Birdsall