The EU Migration Pact: Building a True Partnership with Africa 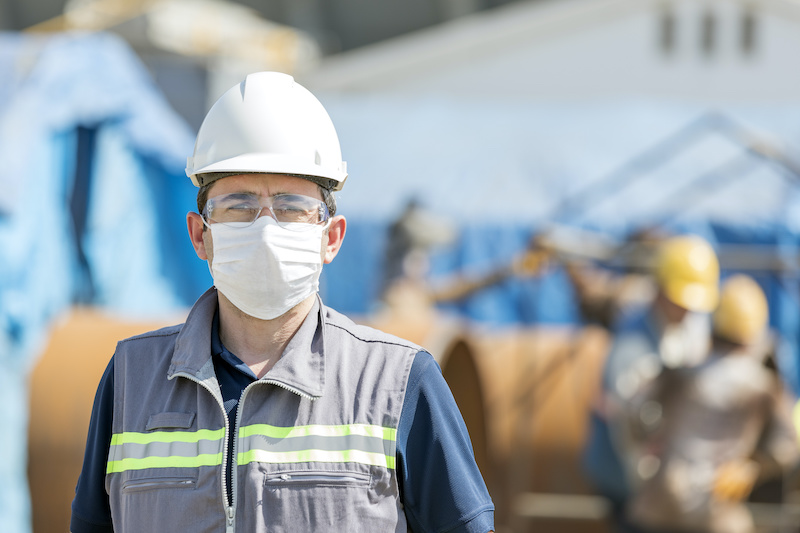 This is the third of three blogs written by the Center for Global Development focused on the EU’s New Pact on Migration and Asylum. The first focused on why both returns and legal pathways are needed to effectively manage migration. The second focused on how to operationalize Talent Partnerships. This blog focuses on how to create a true partnership of equals with African countries of origin.

The European Union has long stated it sees Africa as a multilateral partner rather than a mere recipient of development aid. The new EU Pact on Migration and Asylum echoes this sentiment,  touting a “change of paradigm” in which coordination with partner countries will be deepened, ensuring “a strong link between the EU's actions on migration and the daily challenges of each partner country.” The EU-Africa Strategy, proposed in March 2020, reflects similar language.

Yet despite this rhetoric, the current state of migration cooperation between Africa and Europe is far from this ideal. True partnerships should focus on promoting economic opportunity in countries of origin and expanding legal pathways, both from Africa to Europe and within the continent. Currently, African governments are left responding to Europe’s short-term thinking without collaboration towards long-term mutual gain—a scenario that undermines the potential for joint initiatives that can benefit both Africa and the EU.

Shouldering the burden of short-termism

In 2015, the EU proposed a new Emergency Trust Fund for Africa (EUTF), designed to address the “root causes” of irregular migration. Thus far, the fund’s operational committees have approved a total of 4.7 billion EUR towards EUTF goals. Yet programs have been criticized for solely serving Member State interests.

For example, both African and European governments have extolled the necessity of expanding legal migration pathways between the continents at all skill levels. But the spending priorities of the EUTF have not reflected this rhetoric. Just 1.5 percent has been spent on legal migration schemes. Out of the 372,436 (Horn of Africa) and 848,816 (Sahel and Lake Chad) people impacted by the EUTF’s migration-related programming, only 19 and 288 people respectively have benefitted from these schemes. 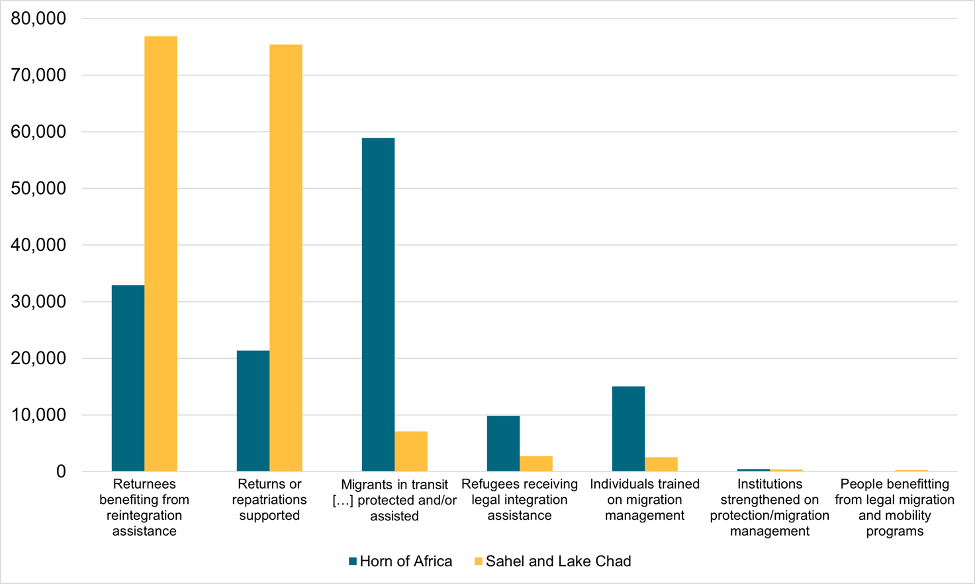 Source: EUTF Yearly Reports for the Sahel and Lake Chad and Horn of Africa regions, 2020

Instead, the majority of funding has gone to promoting returns and reintegration (Figure 1). Despite African diplomats expressing concern, returns remain the top priority of the New Pact. While returns and reintegration are central to migration management, recent moves signal that aid may become conditional on such returns cooperation. This ultimately prioritizes short-term stopgaps over long-term results.

So what would a true partnership on legal migration between Africa and Europe look like? As reflected in the negotiating mandate of the African, Caribbean and Pacific Group of States (ACP Group), such partnerships must be tailored to each individual country. The EU should fund legal migration pathways so that those who do choose to migrate have opportunities to do so willingly, safely, and orderly. This requires engaging more critically with national ministries on the continent to prioritize regular migration over irregular migration, both intra- and inter-continentally.

Ethiopia’s intention with labor mobility, for example, reflects improved collaboration with national ministries and greater mutual benefit for participating countries. Every year, 2 million young Ethiopians enter the labor force, a substantial pool of talent from which both Ethiopia and European countries could benefit. In 2019, the Ethiopian government launched the Overseas Employment Program, which aims to:

In the short term, Ethiopia aims to place at least 150,000 Ethiopian workers abroad. To meet this goal, Ethiopia is exploring opportunities in Europe. For example, the government of Ethiopia is discussing an agreement with the Polish city of Gdańsk for skilled construction, manufacturing, IT, logistics, and maritime workers to plug skills gaps in the Polish economy. And it is working closely with a Dutch think tank, Clingendael Institute, to develop a pilot temporary mobility project for nurses and IT professionals to move to the Netherlands.

Yet by and large, Europe has not promoted such cooperation. Ethiopia is one of the major beneficiaries of the EUTF, with over 271.5 million EUR spent between 2015-2019. Economic and employment opportunities have been prioritized and resulting efforts, such as the Ethiopia Jobs Compact contract and TVET training, have generated 16,000 new jobs. However, there has been little collaboration on legal migration pathways, despite demand on both sides.

Figure 2. Projects funded by the EUTF in Ethiopia 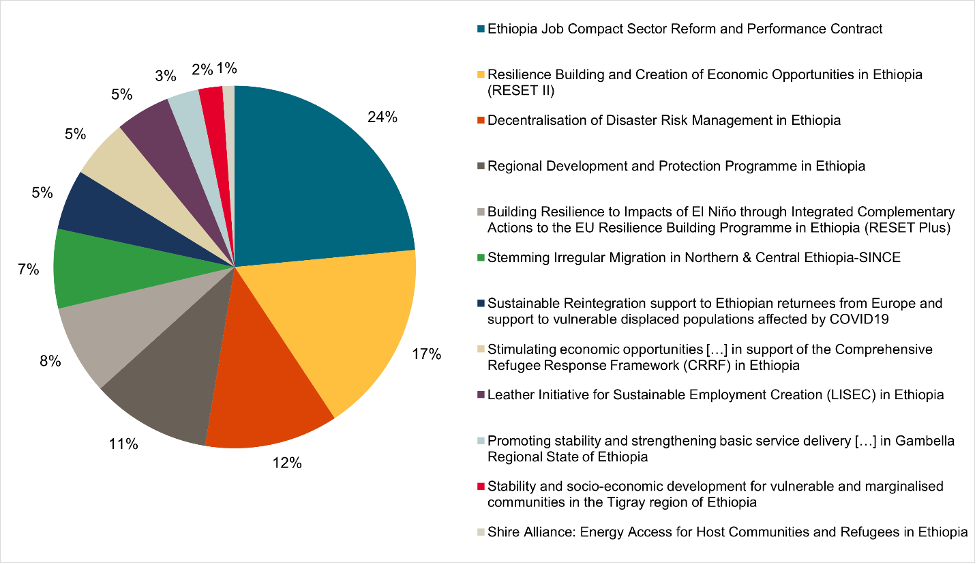 Ethiopia’s strongest legal migration cooperation remains with countries in the Gulf Cooperation Council (GCC) region. After concern regarding irregular migration culminated in 2013, Ethiopia put a moratorium on domestic work abroad until labor and mobility standards in the GCC were properly met. In 2018, the government revived overseas employment under a new narrative, and signed various bilateral labor agreements, including an agreement with the government of the United Arab Emirates to employ at least 50,000 Ethiopian workers through a temporary labor mobility program.

Such intentional cooperation with GCC countries results from assurances that Ethiopian legal requirements are fully met. Existing labor mobility corridors are mostly for low-paid workers, yet program expansions for semi-skilled and skilled workers along with discussions on minimum wages are underway. Unfortunately, no such cooperation exists with Europe, yet.

The EU also has an opportunity to support countries in better responding to migration within Africa. According to a survey by the International Organization for Migration, 80 percent of Africans thinking about migration aren’t considering leaving the continent. As Tsion Tadesse Abebe and Aimée-Noël Mbiyozo write, “the overwhelming majority of African migration is intra-continental and the continent is working towards free movement, free trade, and regional integration.”

Africa is combining its 54 countries into a single economic bloc through the new African Continental Free Trade Agreement (AfCFTA). Using this agreement to promote migration within the continent offers a way to fill eventual skills gaps at national and regional levels. Efforts that introduce legal migration in the region—such as the Better Migration Management Programme for Ethiopians migrating to Sudan, or the Free Movement of Persons and Transhumance in the IGAD Region (comprising Djibouti, Ethiopia, Eritrea, Kenya, Somalia, Sudan, South Sudan and Uganda)—must be amplified in cooperation with the African Union. EU support for reconciliation between national employment law and free movement protocol is encouraged.

With the implementation of the AfCFTA underway, the EU should get creative. EU-Africa partnerships have ample opportunity for mutual gain, which must be better emphasized. As the EU provides support to the AfCFTA in both the negotiation and implementation stages, backing for legal migration programs to support expanded regional trade in Africa must be incorporated into the Pact negotiations, as well.

The emphasis on reducing arrivals and ensuring compliance on returns comes at the detriment of building trust in government throughout participating African countries. African priorities of facilitating legal migration, creating long-term employment, and harnessing trade for growth have been largely ignored.

Future spending of EU money on migration from Africa should not be conditional on cooperation with returns. Instead, it should improve economic development and expand legal pathways. The EU should prioritize three important actions:

French president Emanuel Macron recently remarked, "If we don't succeed in helping Africa develop, we, Europeans, will pay the price and will only continue to speak of Africa in terms of the migration suffered by a youth whom we failed to offer opportunities on their own continent.” EU-Africa relations, however, must go beyond themes of returns and reintegration if partnerships are to be fortified and expanded. Only by fully engaging with African policymakers and priorities will the EU be able to do so.