Protecting and restoring tropical forests represents one of the biggest, cheapest, and fastest ways to fight climate change, as Frances Seymour and I show in our book, Why Forests? Why Now? Yet climate conversations in rich countries remain heavily dominated by energy, while tropical forests often feel like climate’s best kept secret.

On the International Day of Forests, here are five ways to make tropical forests a better known climate solution: 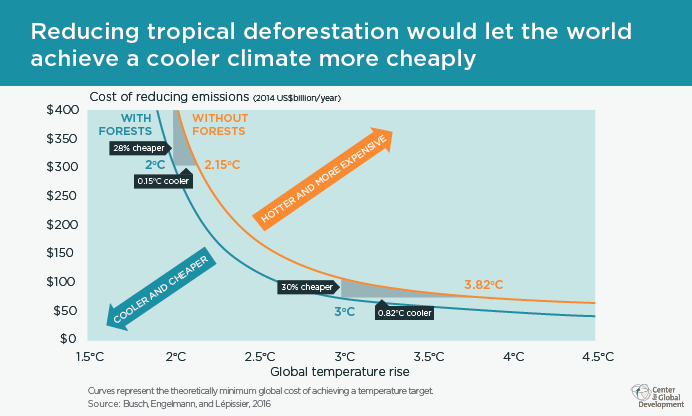 There’s a big gap between how often media coverage of climate change discusses energy versus deforestation. News stories involving climate change mention energy 58 times as often as deforestation; they mention renewable energy 168 times as often as tropical deforestation. For every news story that mentions that carbon dioxide increases in the atmosphere are “driven by the burning of fossil fuels and deforestation,” dozens more mention only that carbon dioxide is “produced by burning fossil fuels.” Closing the gap in media attention would do much to raise awareness of forests as a climate solution. The damage wrought to tropical forests daily, and as a result to the world’s climate, contains myriad human stories which could bring a media story to life; while the opportunity offered by protecting and restoring forests is ‘solutions journalism’ waiting to be written.

Forests are underdiscussed relative to their potential to slow climate change

3. The IPCC’s synthesis reports should unpack net emissions into gross emissions and removals.

The Intergovernmental Panel on Climate Change’s assessment reports are towering scientific achievements. The IPCC reports form the bedrock of what we know about how the climate is changing, what the consequences will be, and how to prevent it. However, as communication tools the reports sometimes come up short. One way the IPCC reports downplay the role of forests in fighting climate change is by displaying net emissions from deforestation in its various charts showing emissions from different sources. But unlike emissions from energy, industry, buildings, or transportation, net emissions from deforestation can be not just driven to zero, but made negative. That is, forests can take carbon out of the atmosphere.

The IPCC could improve understanding of forests’ potential role in fighting climate change by unpacking net emissions into gross emissions and removals in its Summary for Policy Makers, just as it does all the way down on page 827 of Working Group Report 3, Chapter 11. There one finds a bar chart showing that the 8 percent or so of annual emissions that come from net tropical deforestation are comprised of gross emissions of around 16-19 percent, while regrowing tropical forests remove around 8-11 percent of emissions from the atmosphere. This means that if all forest loss were halted, while letting cleared and damaged forests regrow, global net emissions would be reduced by as much as 24-30 percent. (In Why Forests? Why Now? we discuss several reasons this number could be lower—or higher.) 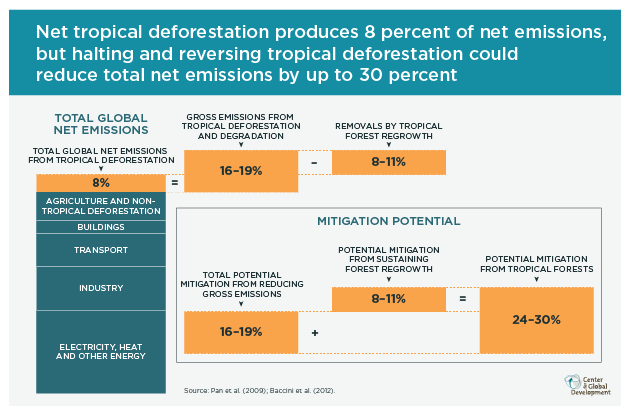 4. Realize we already have a carbon-capture technology.

In an era of technological marvels, it’s tempting to hope that humanity will be able to invent our way out of climate change. As welcome as it would be to have a new “breakthrough” engineering solution to remove carbon dioxide from the atmosphere involving tubes or wires or chemicals, let’s not forget to take full advantage of the safe, natural, proven, large-scale “carbon capture and storage technology” we already have—forests. Photosynthesis has been turning carbon dioxide into solid carbon perfectly well for millions of years. And it’s not just regrowing forests that take carbon dioxide out of the atmosphere—mature forests do too. A new study in Carbon Balance and Management finds that in eight out of nine Amazonian countries between 1980-2010, mature forests took more carbon dioxide out of the atmosphere than fossil fuel use put into it. So, let’s not try to inventing a carbon-capture technology; let’s invent another one, while deploying the leafy green technology we already have.

5. We are the vested interests we’ve been waiting for.

Some climate solutions will create legions of jobs—think wind technicians, “America’s fastest growing profession.” Others will produce a new generation of billionaires, a la Elon Musk of Tesla fame. These people make powerful advocates for a low-carbon future. The irony to fact that reducing deforestation is a relatively low-cost climate solution (suggested to us by David Kaimowitz, a reviewer of Why Forests? Why Now?) is that there’s nobody who stands to see their stock price double, or land a big federal contract. That’s not that nobody benefits from keeping forests standing. Far from it—standing tropical forests provide healthier air, cleaner water for farming, and more energy from hydroelectric dams. But the beneficiaries of these services are dispersed, uncoordinated, and (even worse as far as Congress is concerned) living overseas, so they are less likely to take to the halls of Congress to advocate on their on behalf. Domestically, the vested interests in tropical forest conservation lie with all of us concerned about a stable climate, so the more we speak up to our representatives about protecting them, the more they might listen.

In spite of the five hurdles above, many countries are moving forward on policies to protect forests. In fact, forests make up a full quarter of the emission reductions pledged by countries in the lead up to the Paris climate agreement in 2015, according to a new study in Nature Climate Change.