The Global Trade in Deforestation and Associated Emissions

Last month, I celebrated commitments to slow deforestation by Peru and Liberia announced at the UN Secretary General’s Climate Summit in New York.  Those agreements significantly expand the still-small set of large-scale experiments with REDD+, in which rich countries – in this case, Norway and Germany –  promise to pay forest-rich countries to reduce emissions from deforestation.

But a new Working Paper commissioned by CGD’s Initiative on Tropical Forests for Climate and Development argues that such national efforts could be overwhelmed by the increasingly commercialized and globalized markets for commodities that drive deforestation.

The study, “Trading Forests: Quantifying the Contribution of Global Commodity Markets to Emissions from Tropical Deforestation”, by Professor Martin Persson et al seeks to inform “demand-side” efforts to get deforestation out of commodity supply chains.  These efforts are an important complement to REDD+ and other efforts to address deforestation on the “supply side”.  As I argued in blogs last December and June, lining up corporations as constituencies for forestry sector reform in producer countries, and for REDD+ in particular, is a big deal.

So in addition to welcoming last month’s commitments by Peru and Liberia, we should also welcome the provision in the New York Declaration on Forests – also a product of the UN Climate Summit—to:

Support and help meet the private-sector goal of eliminating deforestation from the production of agricultural commodities such as palm oil, soy, paper and beef products by no later than 2020, recognizing that many companies have even more ambitious targets.

The Declaration has been endorsed by dozens of producer and consumer countries and subnational jurisdictions, as well as by some of the most significant producers, traders, manufacturers, and retailers in the relevant supply chains.  But their number does not yet include key consumer countries and companies in emerging markets that constitute a large share of consumption.

What did the study do?

The study by Persson et al mapped the linkage between tropical deforestation and consumption of four “forest-risk commodities” – beef, soybeans, palm oil, and wood products (including timber, pulp and paper) – that are increasingly traded internationally.  The study focused on eight producer countries: Argentina, Bolivia, Brazil, Paraguay, Democratic Republic of the Congo, Indonesia, Malaysia and Papua New Guinea.  Together, those countries represent 83% of beef and 99% of soybean exports from Latin America, 97% of global palm oil exports, and roughly half of (official) tropical wood products trade.

Using a three-step process, the authors first used published literature and reasonable assumptions to calculate the deforestation and carbon emissions “footprints” (area and emissions per ton) for each selected commodity and country. They then traced export flows to identify the destination country or region where each commodity was consumed.  Linking steps 1 and 2, they attributed shares of total deforestation and carbon emissions to consuming countries and regions.  The study used data from 2009, the most recent year for which complete data are available.

What did they find?

The study estimated that these four commodities in only eight countries were responsible for 1.7 billion tons of carbon dioxide emissions from deforestation in 2009; roughly one-third of the global total.  And of this amount, about one-third of the emissions were embodied in products consumed in countries other than where they were produced –equivalent to the emissions from Australia in 2011.  These findings are consistent with those of other recent studies that have used different methods to come up with similar results.

In six out of the eight countries studied, commodity production for export is the number one driver of deforestation.  And if Brazilian beef – much of which is consumed domestically – is excluded from the analysis, on average 57% of deforestation attributed to these “forest-risk” products was embodied in exports, suggesting the potential potency of attention to global supply chains.

And where were the exports headed?

The graphic below, using data from the study, illustrates the flows of embodied emissions between countries that produce and consume the four forest-risk commodities included in the analysis.  The thicker the arrow, the greater the flow. 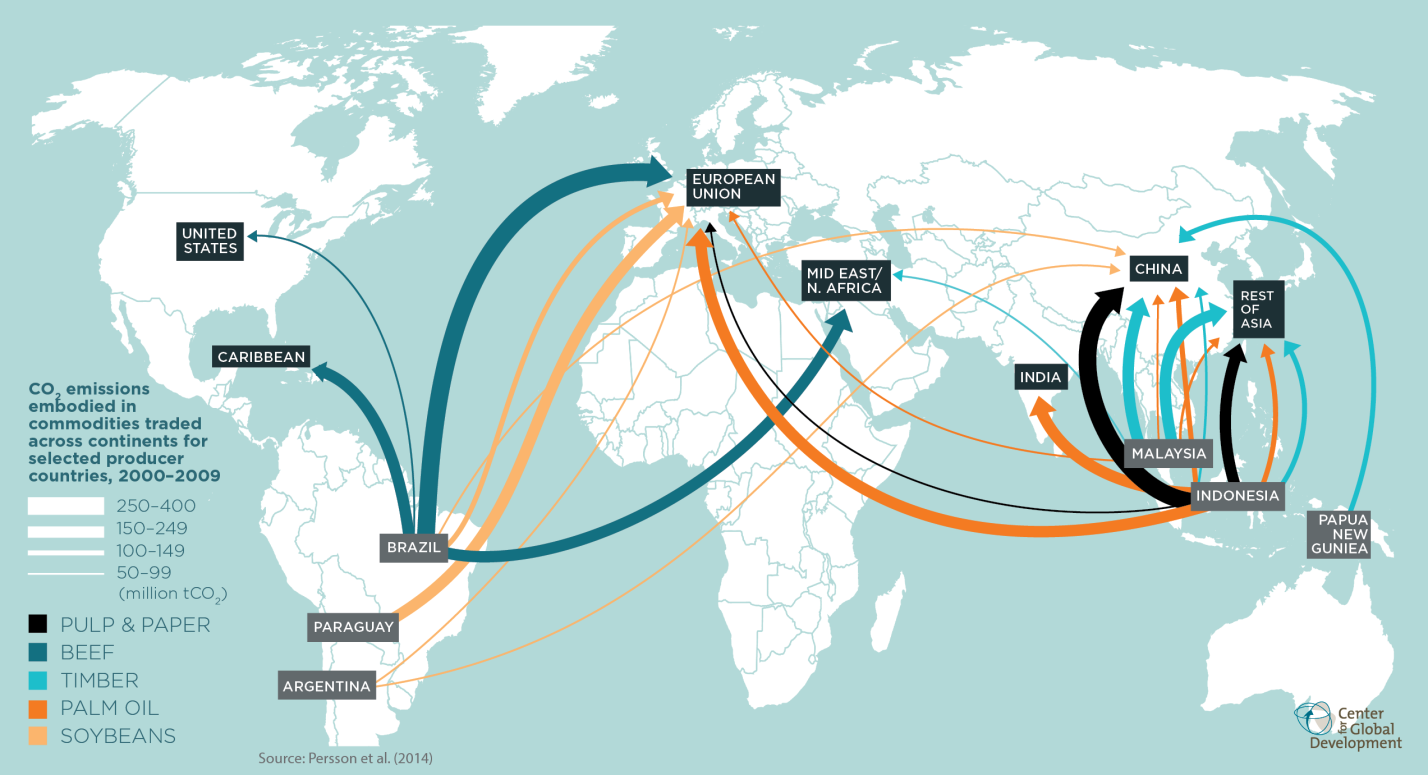 Alert readers will note the relative absence of arrows to the United States.  That’s because even though our consumption of commodities is high, the US is also a major producer of beef, soy, vegetable oils, and wood products.  Ultimately the main concern is growing global demand for these commodities rather than particular trade flows per se, but attention to specific supply chains creates incentives to shift production and consumption patterns to those with lower deforestation and emissions footprints.

What are the trends?

The share of deforestation and associated emissions attributable to global trade in the four commodities increased between 2000 and 2009 for every country in the study except Bolivia and Malaysia.  And for most countries (with the notable exception of Brazil), deforestation to produce commodities for export has continued apace since 2009.  For example, the ongoing conversion of forests and carbon-rich peatlands to export-oriented oil palm in Indonesia and Malaysia means that the emissions intensity of their palm oil sectors – which takes into account deforestation in the ten years prior to production – has likely increased and will remain high, as recently-deforested lands come into production.

Watch this space for a forthcoming study by my CGD colleague Kim Elliott, which will show how the EU’s biofuel policies have driven a significant increase in palm oil imports into Europe, ostensibly to help meet emission reduction objectives.  Oh, the irony.

What are the implications?

Tropical deforestation is a global problem due to its contribution to the emissions that cause climate change.  And the solution needs to be global –not only because everyone benefits from reduced emissions, but also because deforestation is increasingly the result of global consumption of the commodities that replace forests.

Of course the first-best solution would be to ensure that the price of those commodities internalized their full costs – not just in terms of the social cost of carbon emitted when forests are converted to other uses, but also the loss of the many other unpriced services that standing forests provide for free.  On the latter, see new CGD Working Papers on forest-based ecosystem services by Katrina Brandon and Katrina Mullan.  On the former, the role of tropical forests in mitigating climate change is a global public good that we need to figure out a way for rich countries to pay for, and support for REDD+ is a good place to start.

Blog Post
What Will It Take to Stop Tropical Deforestation? Lessons...
William Savedoff

Since 2008, programs for Reducing Emissions from Deforestation and Forest Degradation Plus (