Off to a Good Start: How the Biden-Harris Administration Can Strengthen DFC’s 2X Initiative | Center for Global Development | Ideas to Action Skip to main content

Off to a Good Start: How the Biden-Harris Administration Can Strengthen DFC’s 2X Initiative

Read the Paper
by
Megan O'Donnell
and
Jocilyn Estes
April 13, 2021 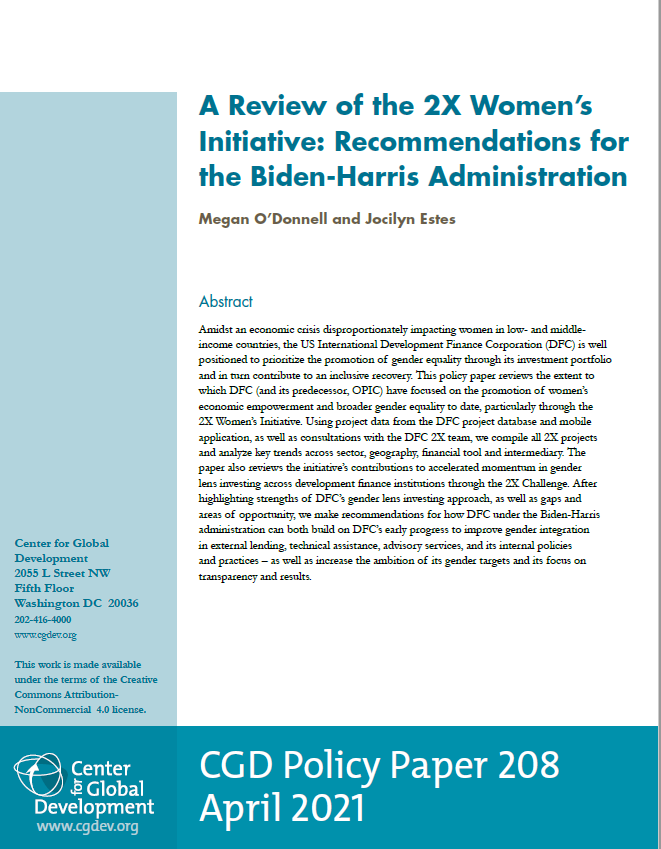 A Review of the 2X Women’s Initiative: Recommendations for the Biden-Harris Administration
Megan O'Donnell
and
Jocilyn Estes
April 13, 2021

In March, the US International Development Finance Corporation (DFC) held its first board meeting of the Biden-Harris administration. At that meeting board members voted to approve just one project—a $300 million loan to expand a Brazilian bank’s lending portfolio to small and medium enterprises (SMEs). The loan is notably focused on increasing lending to women borrowers, as well as those in underdeveloped regions of the country, making the new administration’s first board-approved DFC investment a 2X Initiative project—a promising starting point.

Back in 2018, DFC’s predecessor agency (OPIC) announced the launch of the “2X Women’s Initiative,” a commitment (initially) to mobilize $1 billion to promote women’s economic empowerment and broader gender equality. When DFC opened its doors over a year ago, it continued to focus on women’s economic empowerment, increasing its 2X mobilization target to $9 billion. Continued commitment to this agenda under the Biden-Harris administration is critical; evidence suggests that sectors where women predominate as wage workers and entrepreneurs have been hit harder by COVID-19 lockdown measures, with women-run businesses experiencing higher rates of revenue loss and closure during the pandemic. Early signs are good too; the new administration has committed to double down on the international response—including the virus’ secondary impacts on women and girls—and has launched a new White House Gender Policy Council that will lead broader efforts to promote gender equality across domestic and foreign policy.

Amidst an economic crisis that disproportionately impacts women in low- and middle-income countries, the DFC can build on its legacy of leadership in promoting gender equality through its portfolio and policies, and increase its reach and ambition in doing so. One year into DFC’s tenure as the flagship US development finance agency, our new policy paper reviews the agency’s commitment to mobilize finance for women’s economic empowerment and assesses the institution’s broader approach to gender integration.

Keep reading to preview our main recommendations for DFC leadership and read the paper here.

DFC can ramp up ambition on gender lens investing under the Biden-Harris administration.

By our count, close to half of DFC’s financing in 2020 was in 2X eligible projects—increasing both in absolute and relative terms over the initiative's brief history. This uptick in DFC financing dedicated to 2X projects is promising in its reflection of the institution’s prioritization of ensuring women are targeted by, and benefiting from, DFC investments. That said, it is still unclear whether these topline financing volumes count full project budgets. Where projects may address gender inequities only in part, counting the full investment towards 2X targets would overestimate the extent to which funds are reaching women. For example, DFC announced plans to finance a $150 million loan to Banco de la Produccion in Ecuador, but only 30 percent of loan proceeds are committed to support DFC’s 2X Women’s Initiative, so has the full $150 million been counted towards 2X targets?

To build on DFC’s momentum while increasing transparency around gender-related investments and their and results, the agency should:

DFC has an opportunity to “meet women where they are” by increasing its 2X investments in sectors where women are concentrated.

In light of women’s concentration in small-scale agriculture and the health workforce, and their disproportionate care work burdens, DFC has an opportunity to “meet women where they are” by increasing 2X investments in these areas. Increased gender-responsive investment in water, sanitation and hygiene (WASH) and energy can reduce domestic responsibilities contributing to women’s time poverty and limiting their opportunities to seek full-time, quality employment, or dedicate time to growing their businesses. Similarly, projects that aim to strengthen the care economy through investments in child and elder care will help to reduce and redistribute the unpaid care work that acts as a binding constraint to women’s economic equality and empowerment. Through broadening the sectors of 2X projects and the populations they reach, DFC would work towards a more intersectional approach to gender lens investing. Rather than concentrating on providing finance to comparatively higher-income women entrepreneurs, diversifying 2X investments could help them better reach currently under-reached demographics of women and girls, including those living in poverty.

DFC can also “meet the moment” by expanding 2X’s reach and diversifying its response to the pandemic’s impact on women.

To rise to the challenge that COVID-19 and the ensuing economic crisis poses to women and girls, DFC will also need to increase investments in lower-income settings and diversify the mix of clients, partners, and instruments used. Currently, 30 percent percent of 2X projects (and over 54 percent of spending) are in upper-middle income countries.

And while DFC has a variety of financial tools at its disposal (including use of political risk insurance, unique among bilateral DFIs), technical assistance, and direct equity (first made possible through the BUILD Act), most of the institution's commitments are made through finance. DFC’s 2X portfolio consists of primarily debt investments, but to an even greater degree than the institution’s portfolio at-large. Finance regularly comprises more than 99 percent of DFC’s 2X investments, with loans specifically coming in at over 90 percent of annual 2X spend.

** The BUILD Act, which established DFC, authorized the institution to conduct direct equity investments. OPIC had no equity tool.

DFC's 2X Initiative is clearly aligned with the new administration’s commitment to lead on gender equality and inclusion, both at home and abroad. Building on the momentum of the 2X Initiative in the ways we outline would contribute to global gender equality and transparency and accountability, setting an example for other development finance institutions committed to supporting women during a time of global economic crisis.