I sat down to watch the Pope’s speech to Congress wanting to hear what he would say about climate change to an audience trying to balance climate denial and faith.

According to the Center for American Progress, 70% of Republicans in the Senate and 53% of Republicans in the House deny the existence of human caused climate change.  In this same group, 138 members of Congress (32%) and 26 Senators (31%) are Catholics.  There is some significant overlap.  How would climate denying Catholics react to the Pope’s messages?  Within the leadership, house majority leader Boehner, minority leader Pelosi and vice-president Biden are all Catholic.  What, I wondered, would the Pope have to say to them about climate change?

The Pope is well known in climate change circles for his outspoken support for climate action, as articulated in his May 2015 encyclical letter, Laudato Si’.  (See commentary on the Pope’s letter by CGD colleague Frances Seymour.) He is also well known for his laser-like focus on improving the lives of poor people, highlighted by CGD’s Jonah Busch in a blog on the encyclical, so I expected to hear him point out how climate change is already wreaking havoc on the poorest and most vulnerable in poor countries, and even moving beyond mild inconvenience to significant impacts in rich ones.  I was not disappointed by the attention to poverty: “I would encourage you to keep in mind all those people around us who are trapped in a cycle of poverty. They too need to be given hope. The fight against poverty and hunger must be fought constantly and on many fronts, especially in its causes.” 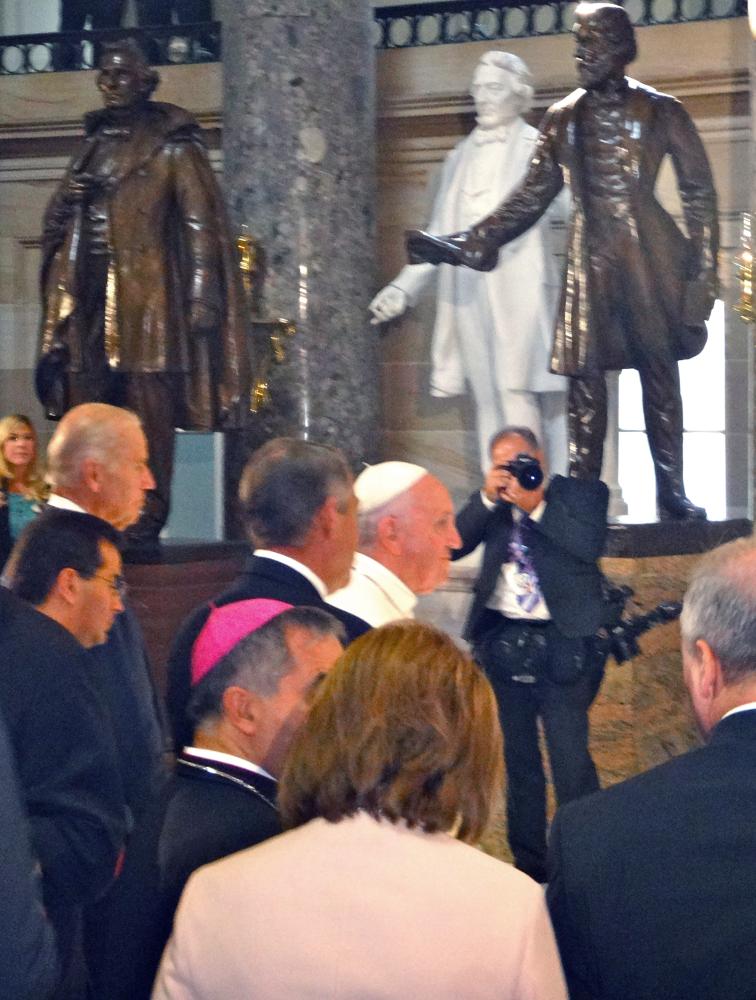 But in 50 minutes the Pope didn’t once even mention the words Climate Change!

And yet, at the same time, listening to the speech through a climate lens, the whole speech really was about climate change.  Or at least that’s what I heard.

The Pope asked Congress  “not to turn their back on our 'neighbors' and everything around us. Building a nation calls us to recognize that we must constantly relate to others....” Relating to others would mean providing support for the small island nations facing the threat of being sunk by rising sea levels and poor farmers trying to adjust to more frequent droughts.  It would mean honoring the US pledge to the Green Climate Fund, half of whose resources are pledged for adaptation. Whereas in June 2015 the House Appropriations Committee essentially zeroed out climate finance, including the initial $500 million for the Green Climate Fund. (Hat tip to Warren Evans.)

The Pope highlighted the plight of refugees, which will only worsen with climate-induced migration. “Our world is facing a refugee crisis of a magnitude not seen since the Second World War. This presents us with great challenges and many hard decisions. On this continent, too, thousands of persons are led to travel north in search of a better life for themselves and for their loved ones, in search of greater opportunities.”   In fact, as the Guardian pointed out, one of the drivers of the current refugee crisis was a five-year drought – the worst ever recorded in Syria – that began in the 2007-8 cropping season.

And the Pope channeled clean energy boosters, activists advocating limits on coal mining on public lands and the architects of the recently agreed Sustainable Development Goals when he said:  “The right use of natural resources, the proper application of technology and the harnessing of the spirit of enterprise are essential elements of an economy which seeks to be modern, inclusive and sustainable.”

When he came to the messages that pointed most directly to climate change, as laid out in the “Laudato si,” the Pope emphasized the message most relevant for climate deniers:  that climate change is indeed induced by human activity, entails huge potential risks and requires action by all.   The “common good also includes the earth, a central theme of the encyclical which I recently wrote in order to ‘enter into dialogue with all people about our common home…. We need a conversation which includes everyone, since the environmental challenge we are undergoing, and its human roots, concern and affect us all….  In Laudato Si’, I call for a courageous and responsible effort to ‘redirect our steps’ and to avert the most serious effects of the environmental deterioration caused by human activity.”

Probably the Pope’s most powerful message on climate change was in his emphasis on the uniquely powerful role that his audience could play in creating a solution: “I am convinced that we can make a difference and I have no doubt that the United States – and this Congress – have an important role to play. Now is the time for courageous actions and strategies, aimed at implementing a ‘culture of care’ and ‘an integrated approach to combating poverty, restoring dignity to the excluded, and at the same time protecting nature.’”

Even though he didn’t utter the words “climate change,” he made a speech that members of Congress should hear as directed to them.