Norway’s “Rainforest Billions”: How Did the Stars Align? | Center for Global Development | Ideas to Action Skip to main content

Norway’s “Rainforest Billions”: How Did the Stars Align?

Seven years ago at the 2007 climate talks in Bali, then Norwegian Prime Minister Jens Stoltenberg shocked the world by pledging $2.5 billion over the next five years to reduce tropical deforestation. Since then, as described in a recent CGD Working Paper, “The State of REDD+ Finance,” Norway has remained the 10 billion kroner gorilla when it comes to putting money on the table for REDD+. As illustrated in the figure below, Norway’s pledges surpass those of the next five countries combined. 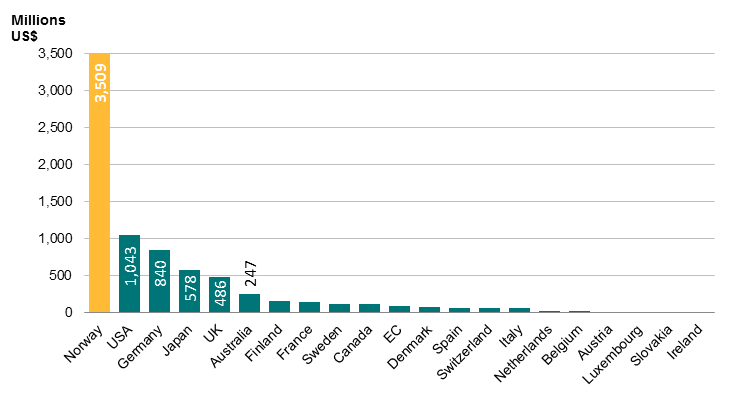 Last month, we released a paper and accompanying blog detailing the challenges of climate politics, budget austerity, and aid rules that constrain REDD+ finance from the United States. How has Norway avoided such constraints? We also released a paper and blog reviewing the political opposition generated by a proposal to include international forests offsets in California’s cap-and-trade program. By contrast, why has Norway’s finance of REDD+ provoked so little controversy in the domestic political arena?

A new CGD Working Paper, “Climate Policy Constraints and NGO Entrepreneurship: The Story of Norway’s Leadership in REDD+ Financing,” by Erlend A. T. Hermansen of the CICERO Center for International Climate and Environmental Research–Oslo and Sjur Kasa of Hedmark University College, answers these questions and many more.

Hermansen and Kasa illuminate how the stars aligned to support Norway’s initial “rainforest billions” commitment, and to maintain that support over the last seven years, through a change in government last year. In short:

But the stars did not align all by themselves. As tipped in the title of their paper, Hermansen and Kasa emphasize the role of NGOs as policy entrepreneurs in generating and sustaining the rainforest billions commitment.

In 2007, the leadership of Friends of the Earth–Norway and the Rainforest Foundation Norway saw a window of opportunity as climate change rose on the domestic and international political agendas. Friends of the Earth–Norway proposed a crosspolitical “climate settlement,” leveraging the desires of the ruling parties and the opposition to show leadership on the climate issue.

The NGOs also linked their proposal to international developments, mobilizing support from the Brazilian Minister of Environment Marina Silva and civil society leaders from Brazil for prospective Norwegian funding for reduced deforestation. (For more on parallel developments in Brazil during this period and the country’s remarkable success in reducing deforestation, see the background paper by Sergio Abranches and associated blog.)

And by providing legitimacy, NGO support for the initiative might also help explain the relative absence of domestic controversy over NICFI, even in the face of concerns about corruption and safeguards in the context of REDD+ implementation described in the paper. The authors speculate that NICFI’s “very generous funding for civil society projects” channeled through Norad—from which CGD as well as Norwegian NGOs have benefited—might also have dampened criticism.

Hermansen and Kasa conclude that domestic political support is sufficiently robust that NICFI is likely to be a “centerpiece” of Norwegian climate policy for the foreseeable future. Ironically (and appropriately), the continuation of NICFI will be more dependent on political developments in partner countries than at home in Norway. Setbacks in the fight against deforestation in Brazil and Indonesia in particular could “undermine NICFI, and certainly make the planned future spending of Norway’s rainforest initiative difficult to achieve.”

Let’s hope that the stars remain aligned in the heavens above Norway as well as across the skies of forest-rich countries in the tropics for effective partnerships to reduce deforestation.