Mead Over and Yuna Sakuma
X

As we predicted, this year’s International AIDS Conference featured several presentations on pre-exposure prophylaxis, or PrEP. But more attention at the conference was devoted to UNAIDS’ new treatment target, referred to as “90-90-90”[1], which proposes to triple the number of people on antiretroviral treatment by 2020.  In this context, the cost-effectiveness of PrEP in comparison to plausible alternative HIV interventions is a crucial consideration.  When treatment advocates are calling to bring the number of HIV-infected people on ARVs from 9 to 28 million in just five years, can use of these same drugs for the uninfected be justified?  Research points to some specific contexts where PrEP may be cost-effective.

At the TasP workshop in Vancouver, we learned that in KwaZulu-Natal—a province in South Africa with high HIV incidence and prevalence rates—oral PrEP for young women can be cost-effective compared to a threshold of per capita GDP, through the presentation of a mathematical model by Roger Ying and Connie Celum from the University of Washington’s (UW’s) International Clinical Research Center (ICRC).  Ying et al. modeled the incremental cost-effectiveness ratios (ICERs) for each HIV infection averted and quality adjusted life year (QALY) gained for a PrEP program young women ages 20-29 in the South African province of Kwa-Zulu Natal. In their model, oral PrEP was added to a baseline ARV coverage and home HIV testing and counseling (HTC) program.

For comparison, Gomez et al. (2013) published a systematic review of cost-effectiveness modeling studies of PrEP, including several studies also in South Africa (Figure 2). These studies, mostly modeling the oral form of PrEP, often include many scenarios with varying assumptions on cost, efficacy, epidemiology, adherence and dropout, coverage, target populations, and others. The wide range of ICERs, particularly for each infection averted, shows that the model assumptions are critical. If we conservatively assume that each infection averted saves 10 life-years and elide the distinction between a life-year and one that is quality adjusted (a QALY), the table suggests that PrEP costs anywhere between $40 and $4,000 per life-year saved.  Values lower than $500 are quite favorable relative to ART, but values as high as Ying et al’s $2,300 or higher suggest that PrEP should be reserved for use when recruitment of ART patients runs into the kind of costly barriers reported in e.g. Katz et al.

The policy question will thus not be whether to implement ART, but what proportion of HIV/AIDS resources to spend on it for each target population.  In Williams et al. (2011) and Pretorius et al. (2010), the target population is women, and in particular, in Pretorius et al. (2010), younger women. Based on these two studies, it appears that targeting PrEP to younger women, especially to high risk younger women, can be cost-effective, especially when recruiting HIV-positives to treatment encounters obstacles which increase its cost. 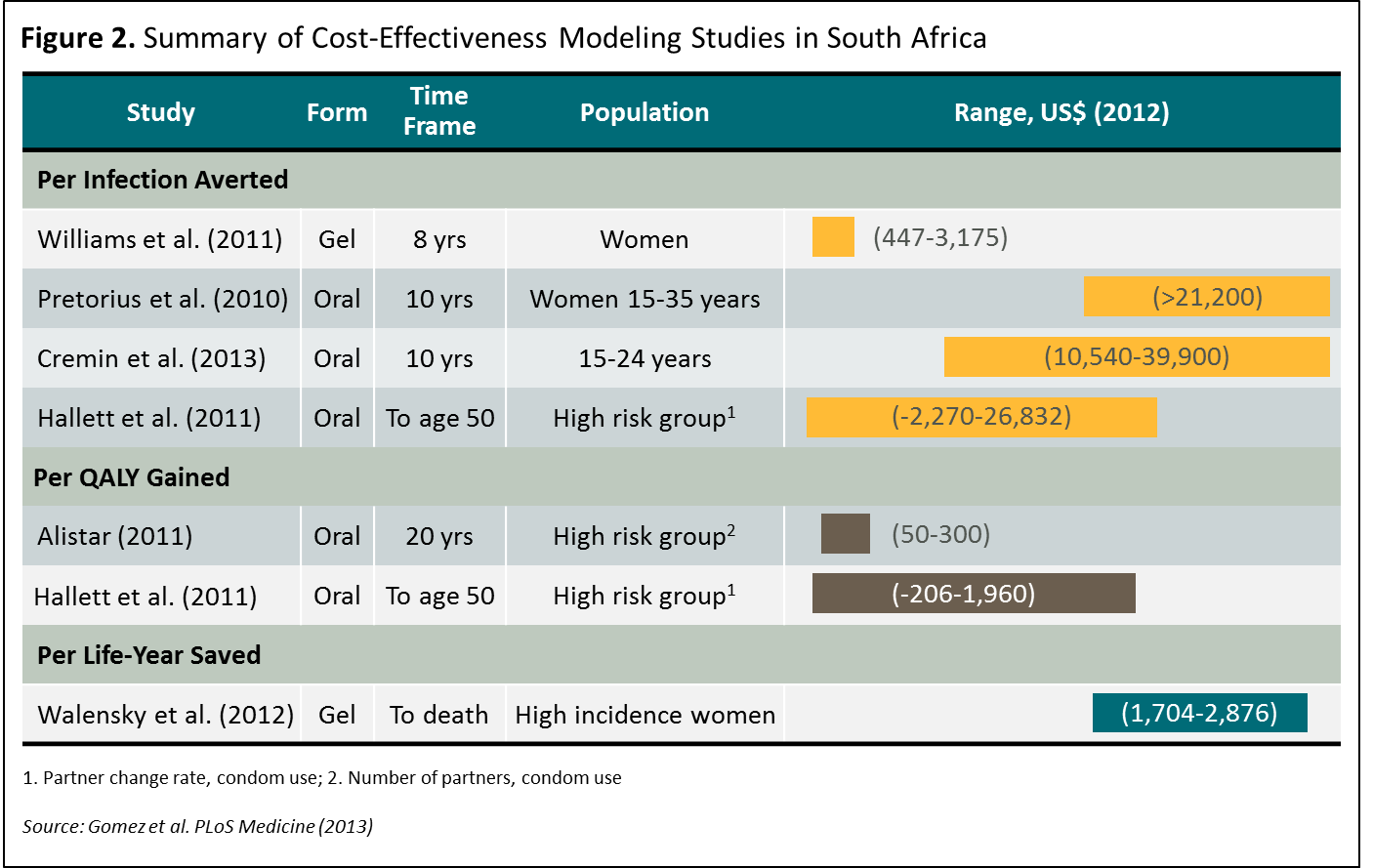 For South Africa, the recent work by Ying et al. seems consistent with the conclusion that Gomez et al. drew in their systematic review: “funding PrEP while other potentially more cost-effective HIV prevention interventions remain under-funded may have high opportunity costs” by diverting resources from early ART initiation or other prevention strategies.

Demonstration projects and open-label trials for PrEP continue, including one in Uganda by UW’s ICRC, which may include cost-effectiveness components. Such studies of real-life field implementation will be crucial to answer the question: in a limited resource setting, what proportion of resources for treatment and prevention should be spent on PrEP?

[1] The three “90’s” call for 90% of all HIV infected to be diagnosed, 90% of those found HIV positive to start treatment, and 90% of those on treatment achieving viral suppression.  See our blog on the treatment cascade for the much lower current percentages.  Since UNAIDS estimates that about 35 million people currently live with HIV infection in low and middle income countries and that number is growing every year that infection exceed AIDS mortality, achieving the “90-90-90” objective would require that at least 28 million people be on treatment of whom 25 million achieve viral suppression.  For the announcement and description of the new UNAIDS targets, see here and here.