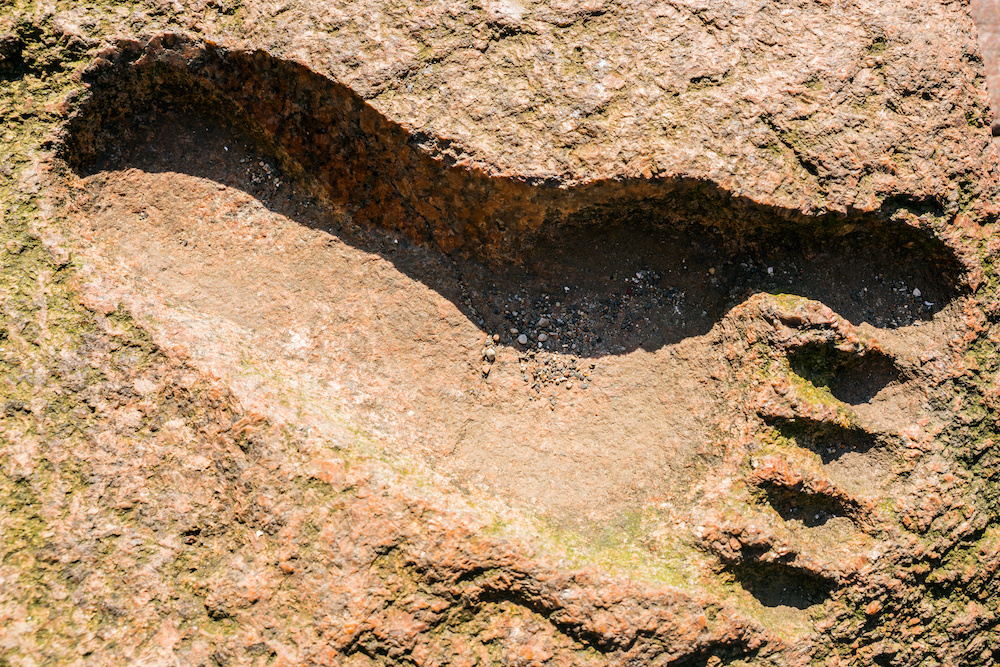 Just as the human body needs blood and a car needs oil, the world’s economy needs US dollars to support global trade and the international financial system. Since the Russian invasion of Ukraine, central banks have been charged with the “simple” task of keeping economies afloat by containing inflation while also fighting a financial war. The allocation of special drawing rights in August 2021, which had the goal of boosting reserves, has also raised more fundamental questions about what reserves are and what role they play in the economy.

This blog serves as a backgrounder on the policy tools that have allowed emerging market economies (EMEs) to access the US dollars they need to limit the economic repercussions of the invasion of Ukraine and advance their economic policies. We will discuss the mechanisms in place to ensure a steady flow of dollars during crises. This comes at a time when the SDRs are still sitting on the balance sheets of developed countries’ central banks, with policymakers still deciding how to use them to bring more flexibility to monetary and fiscal policies.

As international financial institutions and other prominent actors look to redefine their policies to better respond to today’s challenges, it is vital to understand the FX movements that took place in the decades after the Global Financial Crisis, as they illustrate the dependence that EMEs developed on dollars. Post-Global Financial Crisis reforms of financial institutions shifted dollar concentration from Europe to Japan and EMEs, increasing the reliance on the dollar (Figure 1). Many activities in EME economies rely on dollars, now, particularly trade (Figure 2). 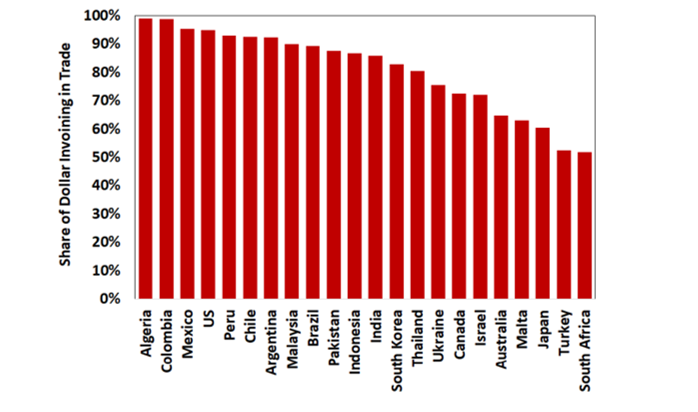 In March 2020, as the pandemic hit, global corporations suffered from reduced access to US dollar funding, as US banks decided to reduce their lending and increase precautionary balances. Many corporations operating outside the United States tried to draw heavily on their committed credit lines with branches of US banks, forcing the latter to withdraw dollars from their EME branches, creating an unexpected capital outflow from EMEs.

As a result, EMEs needed to find a way to replenish their FX reserves to satisfy their dollar needs to mitigate the impact of any unexpected shock that could make their economies even more fragile.

European countries successfully managed to do this in 2008 by  drawing heavily on “swap lines” offered by the US Federal Reserve. A similar phenomenon occurred in May 2020, as swap usage reached $449 billion, compared to $598 billion during the Global Financial Crisis (figure 3), 82 percent of which was directed towards the Bank of Japan and the European Central Bank.

What exactly are swap lines?

The Federal Reserve’s swap network is designed as a financial system “backstop” of last resort, with higher interest rates than FX markets in “normal” times. Its main goal is to contain a crisis in dollar markets by providing some selected foreign central banks with dollar liquidity, which they can then distribute to domestic financial actors.

Once this agreement is made, the foreign central bank draws on the swap lines to obtain the needed dollars through the Federal Reserve in exchange for local currency (often the collateral that its domestic financial institutions provided). Once the foreign central bank receives its dollars, it then distributes them to the domestic financial actors as agreed in the repo.

The swap network is mainly used to keep major economies afloat. The swap lines were originally accessible only to five central banks: the Bank of England, the European Central Bank, the Bank of Japan, the Bank of Canada, and the Swiss National Bank. During the COVID crisis, the network was expanded to include the Reserve Bank of Australia, the Banco Central do Brasil, the Danmarks Nationalbank (Denmark), the Bank of Korea, the Banco de Mexico, the Norges Bank (Norway), the Reserve Bank of New Zealand, the Monetary Authority of Singapore, and the Sveriges Riksbank (Sweden). But the expansion didn’t substantially increase the number of EMEs with access to this form of support—only Mexico and Brazil were added. Another system was needed.

How does the FIMA Repo Facility offer support to countries that don’t have Fed swap lines?

In response to the growing economic crisis induced by the COVID-19 pandemic, on March 31, 2020, the Federal Reserve established the Foreign and International Monetary Authorities (FIMA) Repo Facility. The facility was supposed to be temporary for six months, however after being extended twice it became a standing facility on July 28th, 2021. Its goal is to ease the pressure on foreign institutions that are liquidity constrained by using Treasury securities as collateral.

The mechanics of the FIMA Repo Facility

Foreign central banks and other financial institutions must establish a FIMA account at the Federal Reserve to access the facility, and once approved, a bank will be able to access this account at any time.

To increase their dollar reserves, the foreign central bank sells US Treasury securities to the Federal Reserve System Open Market Account (SOMA) while agreeing to repurchase them at the maturity of the repo agreement and at a rate slightly higher than market rates to ensure that the system is only used as a last resort back-up to regular FX markets.

This agreement usually matures overnight but should the foreign central bank need the dollars for more than a day, it can roll over the repo agreement and, in this instance, the securities in their SOMA account will be repriced accordingly.

Once the agreement reaches maturity, the foreign central bank will repurchase its US securities and return the dollars to the Fed.

The natural question is why the Fed needs two different systems. Instead, why not just extend swap lines to developing countries? 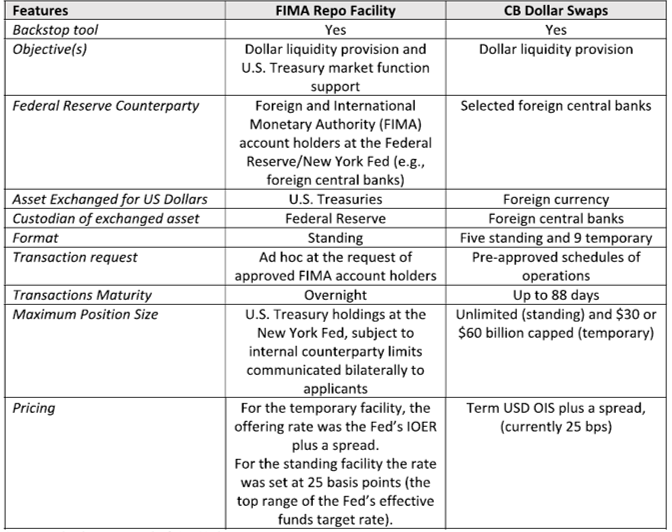 Note: Overall, there are over 200 account holders mantaining 550 deposits and custory accounts at the New York Fed

The recent financial crisis has made it evident that more EMEs need FX liquidity support. The SDR allocation in August 2021 provided unconditional liquidity support for all IMF member countries, including EMEs, but the allocation had to be distributed based on countries’ quota shares in the IMF rather than any measure of individual countries’ needs.  Swap lines have played a crucial role in alleviating dollar shortages in the global financial system, but as noted above, Mexico and Brazil are the only EMEs to have a swap line with the Fed.  The Fed’s FIMA Repo Facility can, in principle, also provide unconditional dollar liquidity to EMEs, but countries’ recourse to the FIMA will be dependent on their holdings of the required US treasuries that in effect serve as collateral for the short-term issuance of dollar liquidity by the Fed.

The IMF has also taken action to ensure a stable flow of currencies to EMEs via its Flexible Credit Line (FCL), which provides contingent access to liquidity (in dollars and other hard currencies) should a balance of payments need to arise, providing a safeguard against a liquidity crisis. But the rigorous qualification criteria for the FCL—which provide the IMF with the assurance that any FCL drawings will be repaid—have so far limited the use of the FCL to just five counties (Chile, Colombia, Mexico, Peru, and Poland).

At the start of the COVID pandemic, the IMF established a new facility, the Short-term Liquidity Line (SLL), that aimed to provide liquidity support to a broader range of EMEs with “very strong fundamentals and policy frameworks.” The qualification criteria were similar to the FCL.  However, there are currently no SLLs in place—suggesting that the qualification criteria may have been too restrictive or that possible users could meet the needs from other sources, including possibly the Fed’s FIMA.

IMF special drawing rights have also been raised as another mechanism to ensure EMEs have access to more flexible reserves. Current options on the table for using SDRs are focused on a more medium-term balance of payments needs, either through an IMF-supported program or perhaps even the multilateral development banks. But these operations, in which SDRs are “recycled” from countries that have extensive reserves to others with more significant needs are unlikely to mimic swap lines.  The latter and the Fed’s FIMA rely on collateral and are aimed at short-term needs, while SDRs are only likely to be lent if adequate assurances of repayment can be provided through policy conditionality or the ex-ante longer-term strength of balance sheets.

The question is whether the combination of SDRs, limited access to swap lines, and FIMA repos gives EMEs enough tools to manage their FX liquidity both in the short and medium term, through crises and the needed transition to a more resilient, sustainable, and equitable future. It appears that the toolbox is incomplete—how it might be completed is a subject for future work.