Reducing Deforestation Is Key to Closing the Paris Gap

A new global climate agreement based on voluntary national pledges of domestic action is expected to be finalized in Paris in December. As of now, the 28 nations of the European Union and 9 other nations including the United States, Mexico, and Russia have submitted plans (called Intended Nationally Determined Contributions or INDCs).  China, India, and Australia are expected to submit plans for cuts in greenhouse gas emissions beyond 2020 in coming weeks.  According to analysis by our colleagues at Climate Advisers, strong domestic pledges from major emitting countries could ensure that global greenhouse gas emissions peak in the 2020s. But anticipated pledges are likely to lead to less than 50% of the reduction in emissions needed to reach a 2 degree pathway by 2030.  And from 2020 onward there is likely to be a large and growing gap between pledged amounts and the 2 degree pathway.

But more ambitious action to reduce deforestation can help to “bend the curve” toward a 2 degree pathway, especially in the short term (2020 – 2025).  Here’s how.

If recent trends in deforestation persist, then even with ambitious Paris pledges the gap between Paris pledges and the 2 degree pathway would be 4.2 gigatonnes in 2020, growing to 15.8 gigatonnes by 2030. (see table below). 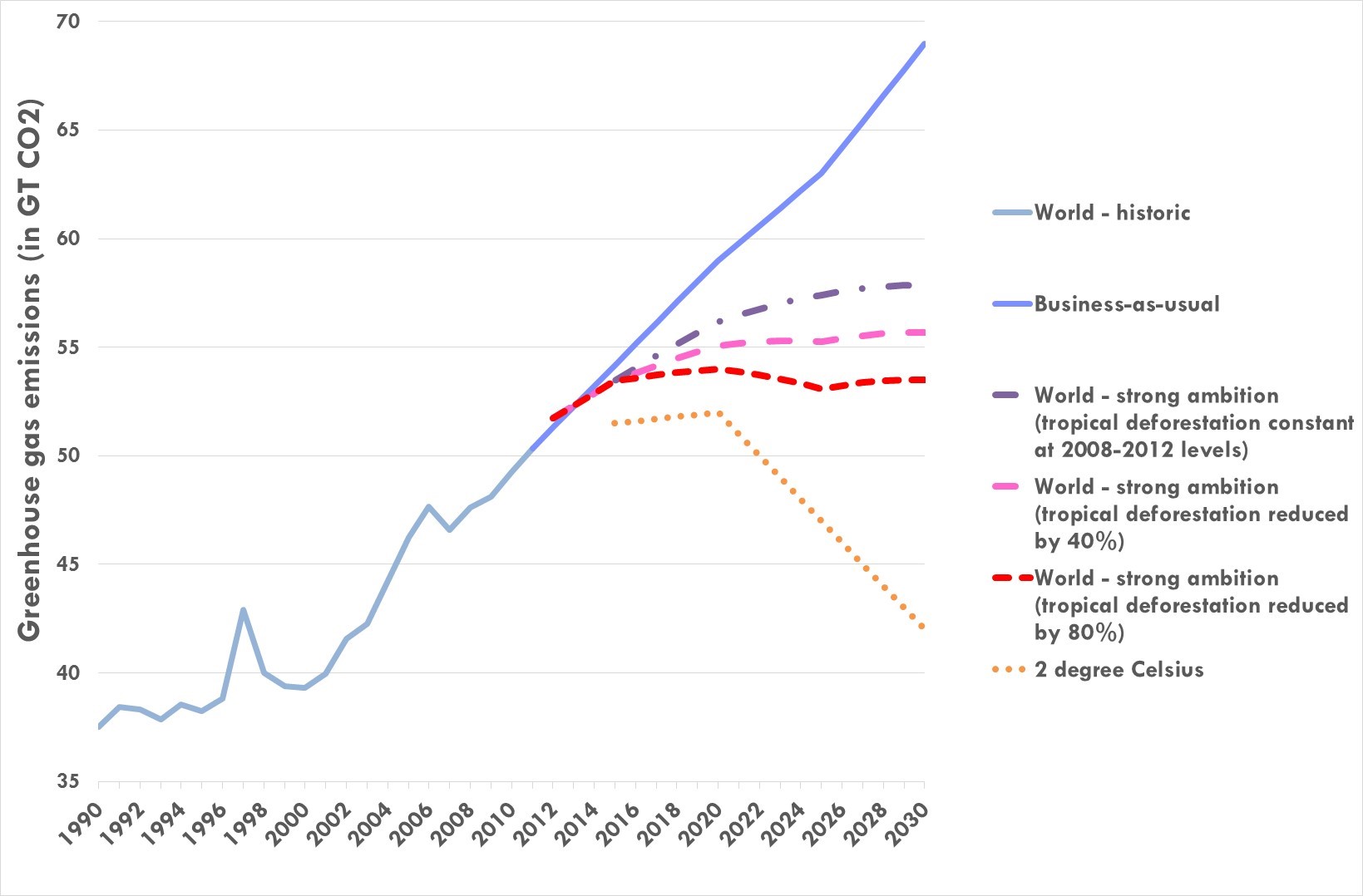 In their analysis, Climate Advisers calculates global emissions for two different scenarios: low ambition and strong ambition. We focus solely on the strong ambition scenario in which major emitters (the European Union, the United States, other OECD countries, Indonesia, Brazil and middle-income countries) commit themselves to strong domestic action.

Expanding on Climate Advisers’ analysis, we focus on the potential role of tropical forests in limiting global temperature increases. Tropical forest countries will quite likely include some self-financed emissions reductions from forests in their ambitious domestic pledges as these are some of the most cost effective measures available to these countries.  We don’t know how big these domestic pledges will be. So we look at illustrative examples of the amount of emissions reductions that would be possible with three scenarios.

For the “business as usual” case, using high-resolution deforestation and carbon stock data , we determine that, together, all tropical forest countries emitted 5.4 gigatonnes[1] a year from 2008 to 2012 — larger than the emissions from the entire European Union in 2011.  In the first comparison scenario, countries pledge ambitious action across sectors but deforestation continues at historical (rising) rates.  Then we look at two additional scenarios.  In the first, tropical forest countries reduce their emissions from deforestation below 2008 to 2012 levels by 40 percent in 2025.  In the second, they reduce emissions from forests by 80 percent below historic levels, as Brazil succeeded in doing in the late 2000s. 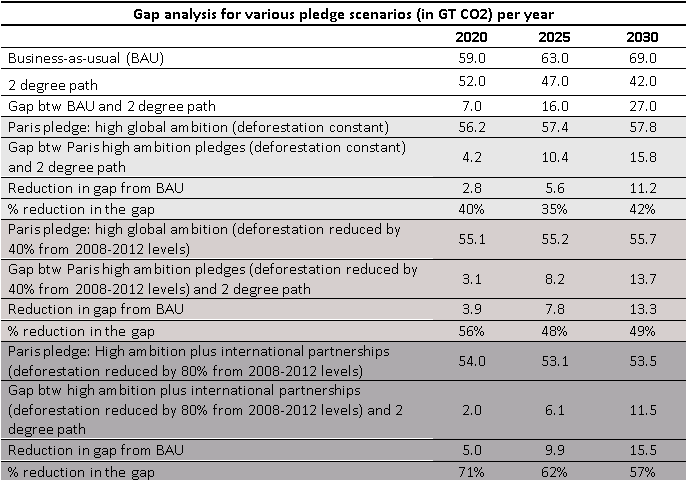 The results are encouraging.  If all forest countries reduced emissions by 40 percent from the historical trend this could lead to 56 percent of necessary emissions cuts in 2020.  If emissions from forests were cut by 80 percent, this could provide up to 71 percent of needed emission reductions in 2020 and somewhat lower amounts in later years.

Reduced emissions from tropical forests cannot close the gap between business-as-usual and the dramatic drops in emissions needed to contain warming to 2 degrees C.  Remarkable efforts will be needed in other sectors like energy and transport.  But ambitious action to reduce deforestation would be substantial and especially useful in the short term, 2020-2025, helping to bridge to the new technologies needed to reduce emissions in other sectors.

To ensure that tropical forests deliver on their potential, forest countries must quantify the amount of emission reductions they will include in their domestic pledges and then they should clarify how much more they could do with funding support from international partnerships.  The international mitigation partnerships proposed in the Lima Challenge need to be expanded to include all tropical forest countries, especially Indonesia.  They should collectively define how much new international finance would be needed by the time of the Paris climate summit.  And rich countries need to commit to provide large-scale payments for emissions reductions from tropical forests, as a contribution beyond their national INDCs.

Blog Post
What Do We Know about the Cost-Effectiveness of Aid Spent...
Matt Juden and Ian Mitchell