The Rise of the Regionals

Lost in all of the noise of the post-Lehman crisis response was an important structural shift in the international development landscape: a much bigger footprint for the regional development banks relative to the World Bank.

Starting in 2009, the G20 pursued a number of measures to help developing countries weather the crisis, one of the most visible of which was an agreement to have the multilateral development banks (MDBs) lend aggressively into the crisis, paired with the commitment of new capital from the institutions’ shareholders in subsequent years.

Less noticed in this set of actions was the relative allocation of capital among these institutions. With the G20 playing a soft coordinating function, the MDBs’ shareholders made a clear shift in favor the regional development banks over the World Bank. These figures tell the story. 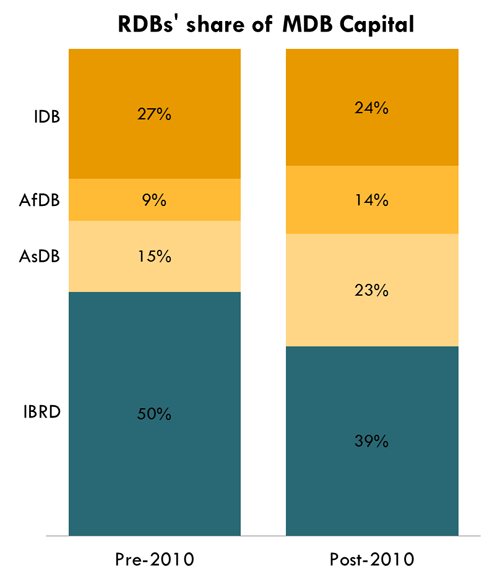 Before 2010 the regionals as a group accounted for just half of the $379 billion in MDB capital. After the 2010 capital increases, they accounted for 61 percent of the $712 billion in capital.

Nothing in G20 declarations at the time or statements within each of the MDBs point to a deliberate snubbing of the World Bank. Rather, the decisions reflected a more affirmative stance toward the regional institutions, as well as a more aggressive posture coming from the leadership of these institutions – which is to say, they asked for more money than the World Bank did. And they got it.

In each case, the regionals made the case that they could operate just as effectively as the World Bank and were better aligned with the interests of the client countries within their respective regions.

Nowhere were these dynamics more evident than at the AfDB, which won a tripling of its capital base. After years of struggle, the institution had emerged in the mid to late 2000s with globally-respected leadership, a series of policy reforms aimed at matching World Bank “best practices,” and critically, an aggressive case about its particular credibility in the region.  The direct ties to the region, reflected in the headquarters location and composition of the staff, also influenced the AfDB’s programming in a way the bank’s shareholders found compelling, particularly as a matter of mission focus and willingness to say “no” to sectors and initiatives that didn’t directly align with a regionally-driven agenda.[1]

I’m certainly not ready to write the World Bank off, and I do think there’s a strong case for bigger and bolder. But that case applies to all of the MDBs. The World Bank doesn’t need to be quite so dominant a presence among these institutions in order to be a more effective presence globally.

So whatever the future might hold for capital increases at the World Bank, the G20 would do well to continue to think of all of the MDBs as pieces of a whole, just as they did in 2009/2010.

[1] At the same time, the bank’s very commitment to be permanently headquartered in Cote D’Ivoire has been the source of considerable disruption and risk for the institution over the past decade, including in its ability to recruit and retain staff.

Blog Post
Building Back Better for the World: It Isn’t About Who...
Charles Kenny