Still Lending (Mostly) After All These Years

Concern about relatively low development finance institution (DFI) mobilization ratios (dollars of private finance mobilized per dollar of DFI’s own commitments) is drawing attention to the product mix in DFI operations. While lending dominates most DFI operations, it is not necessarily most effective in terms of mobilization ratios. DFIs try to strike a balance between lending for their own account and opening up opportunities to private lenders, but they are often criticized for crowding into the private commercial lender space. A recent study found that guarantees, while only 5 percent of multilateral DFI commitments, account for 45 percent of the mobilization of private finance.

Without a change in product mix, hopes for a large step-up in multilateral DFI mobilization ratios do not seem realistic.

In this context, we thought it might be helpful to look at recent trends in the product mix of multilateral DFIs to see if the mix is changing and/or significantly different across institutions. The figure shows the share of annual commitments by product for the private finance operations of five major multilateral development banks (MDBs) and, for purposes of comparison, for two bilateral DFIs with quite different product mixes. 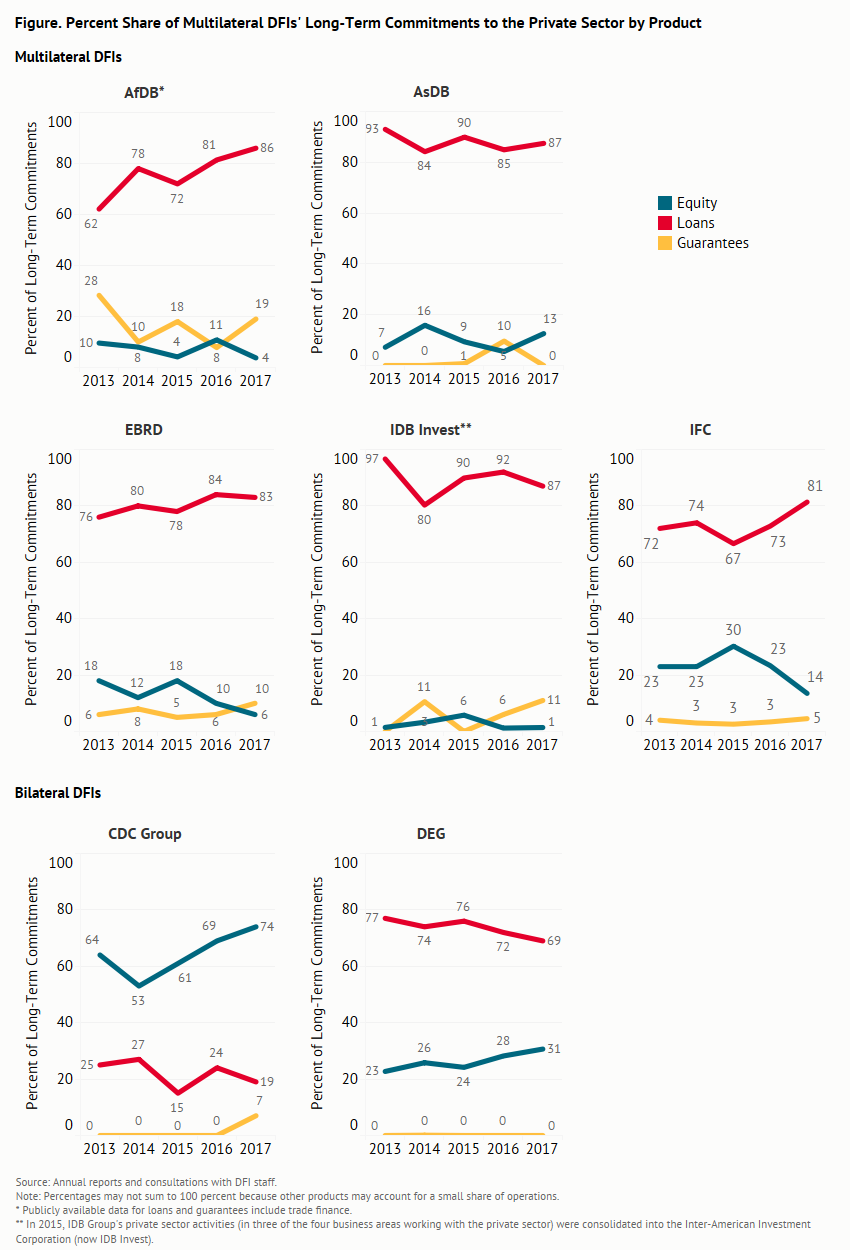 Change is not evident among the multilaterals. Loans mostly represent 70 percent or more of operations, averaging 85 percent across the five institutions in 2017. There is more variation across institutions and over time in the use of guarantees, which ranged in 2017 from 19 percent of operations in the African Development Bank to 0 percent in the Asian Development Bank. But the 2017 average across all five is a low 9 percent, with no observable upward trends.

Equity is also relatively neglected, despite its catalytic role in the capital stack. For four of the multilaterals, the equity shares never reached 20 percent over the whole period. IFC is an exception, with the equity share peaking at 30 percent in 2015 but falling thereafter. (It was 11 percent in the IFC’s fiscal year 2018.) The declining volume of investments from the IFC Asset Management Company, which pools funds from third-party investors and co-invests private equity and venture capital in IFC projects, is also telling: annual investments dropped from $768 million in 2013 to $531 million in 2017.

Clearly global, regional, and domestic macroeconomic developments can constrain investing opportunities in any given year. But bilateral institutions like CDC and DEG demonstrate the feasibility of equity shares consistently in the realm of 50–70 percent or 20–30 percent, respectively.

What’s the problem with equity?

Limited use of guarantees stems from a variety of factors that have been described elsewhere, including (1) MDB equal capital requirements for loans and guarantees; (2) the high transaction costs of negotiating bespoke guarantee contracts, which involve three parties (borrower, guarantor, and creditor) rather than two, as with loans; (3) creditor concerns about guarantee contracts that require lengthy arbitration/dispute settlement efforts before covering the loss. These seem manageable with concerted efforts to refine capital requirements based on track records, standardize contract options, and bridge the gaps between the product demanders and suppliers.

But why the low equity shares of operations? After all, equity boosts the opportunity for leverage. Its development impact should be relatively high; equity capital market development often lags that of lending in developing countries, especially for early stage equity. Returns should also be higher in the long term, though more volatile. And MDBs should have a comparative advantage in equity operations, given their heavy investment in analysis of countries’ macroeconomics, a dominant factor in equity outcomes, as well as their on-the-ground presence and deep knowledge of local actors in every country of operations.

Yet DFIs struggle to fit equity into their financial models. Equity ties up capital for long periods of time before returns can be realized. Unrealized losses can be substantial in any given year, and opportunities for exits are infrequent. Special expertise is needed but scarce, especially for investing in frontier markets and in early stage funds or firms: loan officers cannot seamlessly shift to equity investment. Investing through local funds is complicated by shortages of experienced local fund managers and the difficulty of covering the management costs of small funds. These are all issues that can be addressed—but only if there is a robust institutional strategy for bearing the costs, managing the risks, playing a patient investor role, developing the skills, and building a portfolio large and diversified enough for success.

There are lessons here for the new US DFI. Its authority to make equity investments could help cement its place among DFI overachievers—but not without serious institutional commitment and equally serious internal investment in expertise, efficient systems, and deal development.

Blog Post
Can DFIs Be First Responders in a Crisis?
Nancy Lee

Blog Post
What Next in the International Financial Response to the...
Masood Ahmed