This January, China’s State Council, the country’s chief administrative authority, released a long-awaited update to its White Paper on development. The landmark document marks the culmination of a series of reforms on China’s approach to aid in the last decade, and follows on from two White Papers on foreign aid (first in 2011, then in 2014). It is also the first to be published following the formation of the China International Development Cooperation Agency (CIDCA) three years ago.

As the largest official creditor to developing countries and the world’s second largest economy, there has been considerable interest in China’s footprint in developing countries, attracting criticism on issues like transparency or alleged debt-trap diplomacy. In this blog, we take a deeper look behind both the rhetoric and the numbers in the White Paper to draw out some details—on what has changed substantively and what remains the same, what signals we are hopeful about, and what may temper our enthusiasm.

This White Paper moves on from the prior iterations in a number of ways. “China’s International Development Cooperation in the New Era” (published in both Chinese and English), notably refers to development cooperation rather than aid. This move is consistent with CIDCA’s naming, which drew attention in 2018 for the same reason.

What is more, this is the first time that the Belt and Road Initiative (BRI), which combines investment, development, and trade objectives, is formally included within the development cooperation framework of a White Paper, cementing the BRI’s position at the core of China’s development efforts. As proponents of comprehensive thinking on development (also the focus of CGD’s Commitment to Development Index), we welcome approaches which recognise that development is not just aid and integrate development objectives across policy areas.

The White Paper sees China continuing to open up to global engagement, with the possibility of new partnerships warranting an entire chapter in the paper. A space to watch in coming years will be tripartite cooperation between China, Development Assistance Committee (DAC) donors, and/or multilateral agencies. While trilateral pilot projects were mentioned in earlier editions, this White Paper notably features wider mentions of bureau-level discussions held with both Japan and the EU.

Though the White Paper does not mention commonly accepted multi-stakeholder commitments such as those under the Global Partnership for Effective Development Cooperation, it does allude to aid effectiveness principles. In doing so, it tackles head-on some prominent criticisms levied against Chinese aid.

In response to criticisms of opaque processes and ad hoc aid management, China has committed to more “clearly defined project management rules and regulations” as well as to “establish a tendering system focusing on high quality and competitive pricing.” While examples of Chinese untied aid projects are still few, this is the first mention of “pilot projects with sound tendering processes.” Further, to guard against corruption, China commits to strengthening the “performance appraisal mechanism for entities undertaking projects.”

The White Paper offers few concessions towards greater transparency. Limited additional statistics on the breakdown of China’s $41.6 billion aid budget between 2013-2018, by income group and by region, are included for the first time since the 2011 White Paper. 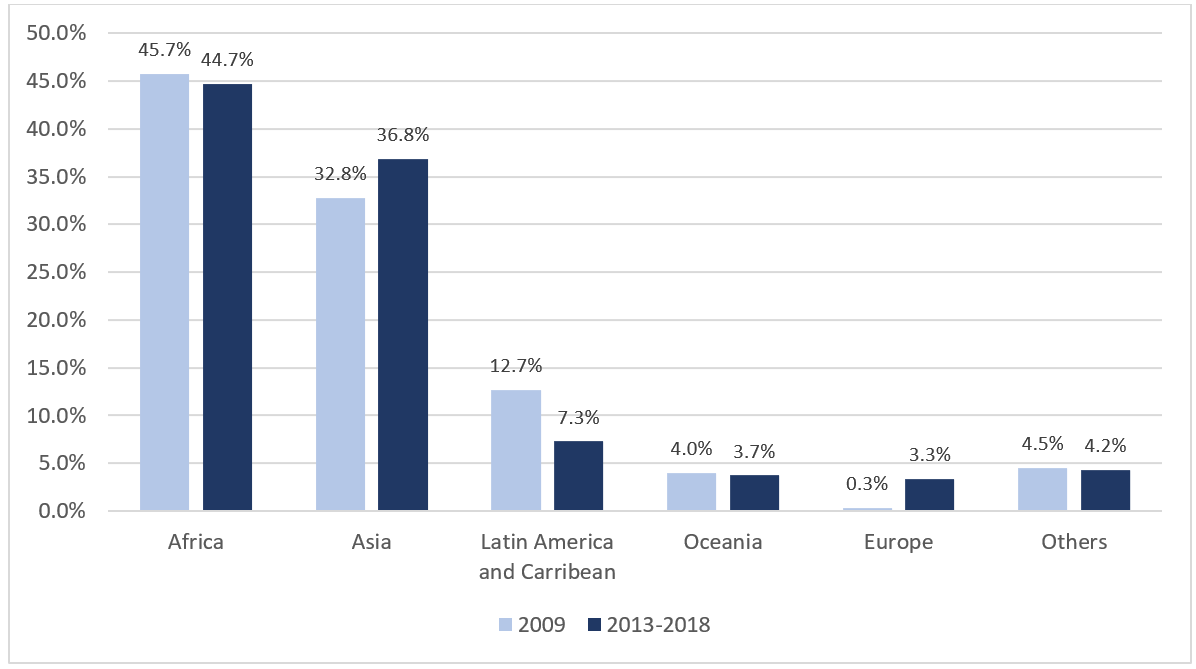 It is heartening to see the White Paper frequently state that aid should be directed to the needs of least developed countries (LDCs); 46 percent of Chinese financing is directed to LDCs, compared to just 44 percent of global cross-border aid in 2018 (using Country Programmable Aid element of Official Development Assistance). Still, figures provided for 2009 show that poverty focus may have been even higher in the past (if LDCs and “other lower income countries” are considered together). 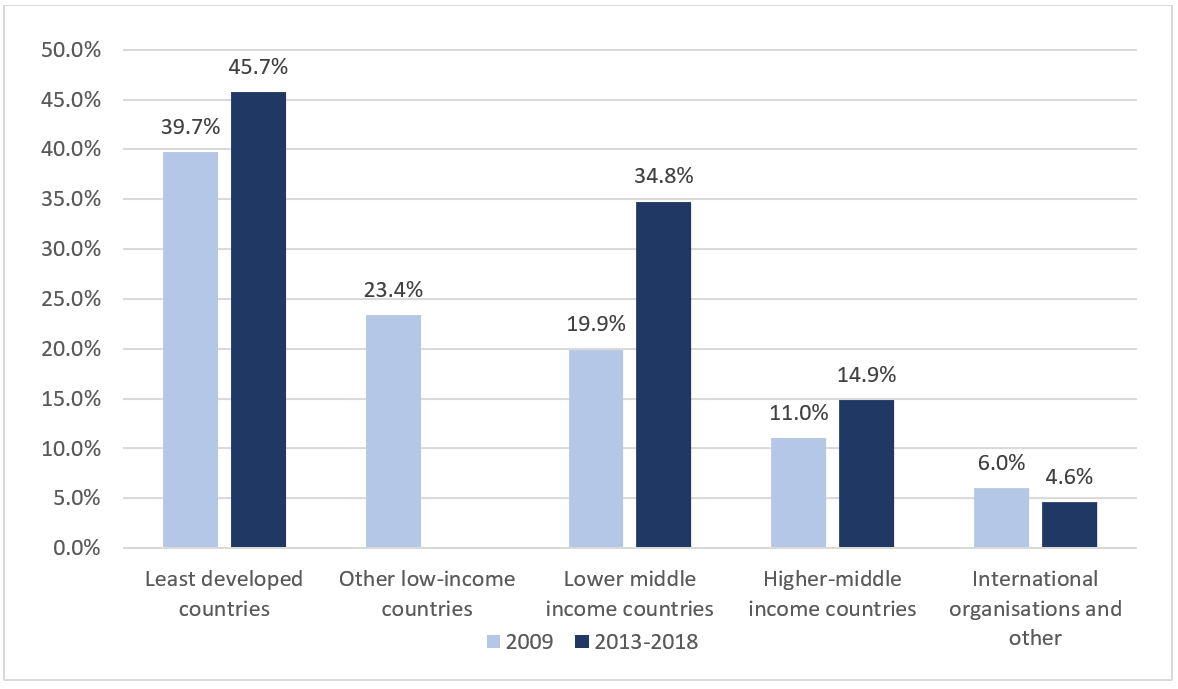 Most exciting for transparency, however, is the promise that China will “develop a modern statistical information system for foreign assistance” to enhance supervision and evaluation. A statistical data hub would be a welcome development for the broader international community, for China’s development partners, and for China itself to better track development outcomes. The latter is an issue China has recognised as it promises to develop “impartial and independent project evaluations” (though, confoundingly, in a different section the White Paper claims that “all projects achieve good results,” which seems an unlikely claim for any provider).

The Paper contains little substance on debt sustainability. While it highlights China’s participation in the G20 Debt Service Suspension Initiative, as well as debt suspension through bilateral consultations, it goes no further. Our colleagues have previously looked at how Beijing’s participation in the DSSI has been slow and incomplete.

The numbers indicate that Chinese annual aid spend has increased by over 45 percent from the 2010-2012 period to 2013-2018 (from roughly $4.8 to $7.0 billion on an annual basis). This is in line with our previous estimate for the Finance for International Development (FID) measure, estimating $5.1 billion in 2017 on a “grant-equivalent” basis (or $6.8 billion when recalculated in line with this White Paper’s methodology: including loans on a face-value basis and adding in-country spend on scholarships). The breakdown of China’s FID was $1.9 billion in grants, $2.0 billion in multilateral core contributions, and $1.2 in loans, based on their grant element.

Within the budget provided in the Paper, China has almost doubled its volume of grants (from $1.7 billion to $3.3 billion annually), significantly increased the amount of annual concessional loans extended (from $2.7 to $3.4 billion a year), and slightly decreased the small amount of interest-free loans it gives (from $389 to $291 million annually). 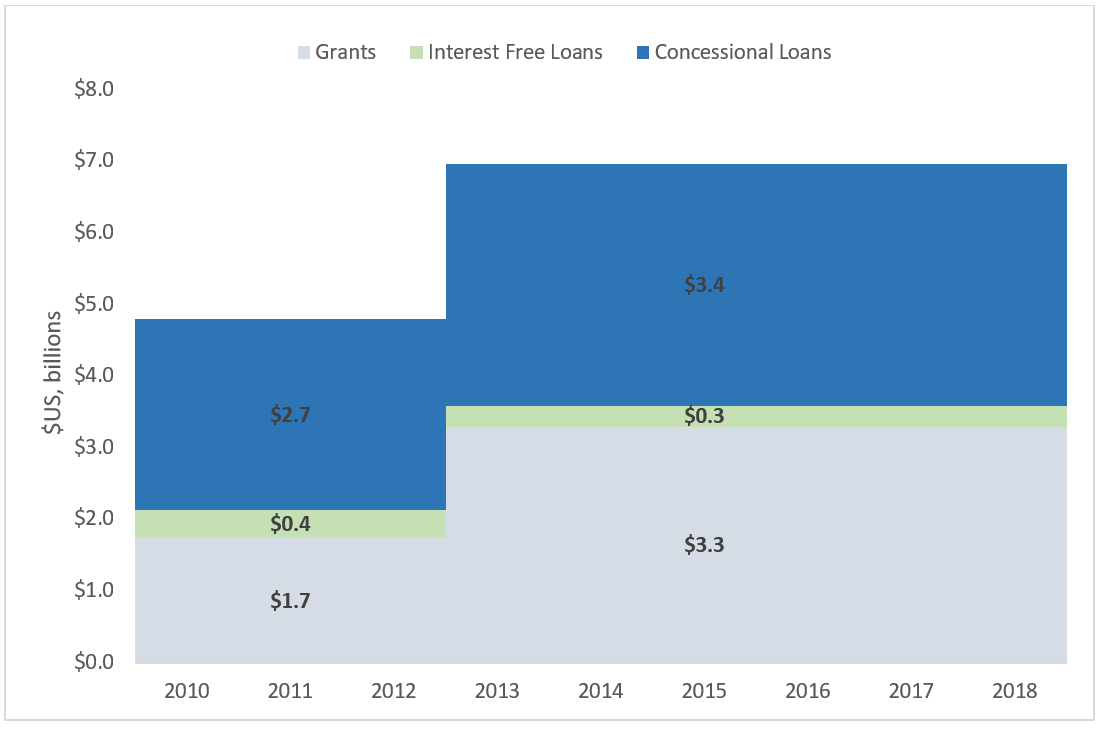 Sources: Author’s own analysis of the 2014 White Paper and the 2021 White Paper

*Note that as loans are reported at face-value rather than on a grant equivalent basis, and as China does not provide definitions of concessionality for its loan terms, it is still difficult to capture how the value of China’s concessional loans would compare with other donors’ or with our FID measure.

In terms of sectoral priorities, the focus on agriculture, infrastructure, and trade is similar to 2014. In addition, the 2021 White Paper for the first time makes mention of projects in cultural cooperation, gender, financial integration, and the digital economy, signifying a widening scope of activities.

Meanwhile, governance-related projects are given more prominence, with reference to Beijing assisting countries in writing their “blueprints for growth” and in sharing its own experience with “reforms to streamline administration, delegate powers, and improve regulation”—crucial elements in China’s own development and economic growth since 1978. Countries highlighted as having benefitted from governance-related assistance are Ethiopia (more here), Cambodia, and Cuba.

Global public goods are mentioned five times in the White Paper, the first time they appear in a Chinese White Paper on development. This includes a reiterated pledge to make any Chinese-developed COVID-19 vaccine a global public good after it has been applied in China, and a new pledge to provide $2 billion in additional financing to the countries hardest hit by the pandemic over the next two years. Climate is mentioned throughout the document along with a section on environment protection but there’s no reference to the Paris Agreement or mainstreaming climate, with 13 climate projects out of 423 infrastructure projects between 2013-2018 (3 percent). Given President Xi’s commitment last year to net zero carbon emissions in China by 2060, we might expect more focus on this in China’s next strategy.

China also provides details on its diverse forms of aid. Though imprecise for understanding the level of financial support going through each form, it gives an indication of policy direction.

Table 1. Forms of Chinese aid, by number of projects or beneficiaries

Source: Author’s own analysis of the 2014 White Paper and the 2021 White Paper

The most prominent trend is the sharp decline, by over half, in the average annual number of “complete” projects—referring to productive or civil infrastructure. In the 2011 White Paper, this was specified as a “major form of China’s foreign aid,” but it seems to have lost ground to increases in technical cooperation projects and capacity-building projects. This may be another signal Beijing is serious about increasing aid to governance.

Many of the principles around China’s aid can still be found, including the core ideas of non-interference and mutual benefit. China continues to see itself as a donor outside the mainstream DAC consensus, and couches its activities firmly within the framework of South-South cooperation. This means that even as Beijing inches towards using principles on aid effectiveness, it will still see itself as operating under different rules than “North-South” aid. In fact, in the opening sentence and throughout the document, China refers to itself as a developing country, and later asserts it will be in the “primary stage of socialism” for a long time to come. The final step in this stage would see China achieving the GNI of a “moderately developed nation.” It’s not clear when this will be met—currently China’s income per head (GNI PPP in 2019) is crudely around the level of the US in the 1950s; and it will likely exceed the World Bank’s high-income threshold ($12.5k GNI/ head, Atlas method) in the next decade.

China also continues to be a proponent of multilateralism, this time even calling itself “a defender of international order.” The White Paper enumerates financial contributions made through various co-financing mechanisms and trust funds, including the FAO-China South-South Cooperation Trust Fund; the China-World Bank Group Partnership Facility; the Africa Growing Together Fund with the AfDB; and the Co-Financing Fund with the IDB. Still, the picture remains incomplete. It is unclear what the 4.6 percent of $41.6 billion (or £319 million a year) to international organisations cited earlier represents; it is not enough to cover all of China’s core multilateral contributions, which our FID work suggest were $2 billion in 2017, and over a third of China’s total.

Such confusion over the numbers only underscores that while sporadic updates can be useful snapshots and even provide cause for optimism, without more regular statistical reporting China’s financing remains opaque and evades scrutiny from both its development partners and the broader international community.

Can China deliver against its commitments?

While the purpose of this blog is to view China within its own context, it is interesting to note China’s direction opposite some other countries’ development approach, including those in the DAC: it has created a separate agency for development rather than folding it in within the foreign ministry, and emphasizes the poverty focus of its aid at a time when many donors are considering a shift to middle-income countries. Where China does align with other countries’ development approach is in its emphasis on global public goods; this may be a promising area of collaboration.

Still, how well Beijing’s rhetoric on multilateralism, transparency, and other measures of aid effectiveness will filter into practice remains to be seen. Only time will tell if China ultimately delivers on some promising commitments.

Blog Post
The EU's Global Gateway Is Not a Groundbreaking Plan for...
Mikaela Gavas and Samuel Pleeck