Which Countries Miss Out in Global Aid Allocation? | Center for Global Development | Ideas to Action Skip to main content

Which Countries Miss Out in Global Aid Allocation?

Countries provide aid for a variety of reasons, but if uncoordinated, the individual decisions of 30 OECD DAC donors and many more multilateral institutions can lead to wide and ineffective variations in how much aid countries receive. These allocations create “aid orphans,” who receive too little support relative to their circumstances and needs, and “darlings,” where the opposite is true. As part of our efforts to assess countries’ Quality of ODA (QuODA), we were keen to develop a measure which rewards aid providers supporting countries that others ignore.

Our former CGD colleague Paddy Carter has urged the development of an aid allocation indicator that assess whether a provider’s portfolio moves the global distribution of aid towards, or away from, some optimal allocation (rather than focussing on “under-aided” countries). Building on his idea, we set out below our proposed approach, and seek feedback on three ways to assess the “optimal” allocation.

In 2018 total official development assistance (ODA) provided by the DAC reached a grant equivalent value of $153 billion, with $59 billon distributed as “country programmable aid” (CPA): a measure of non-emergency cross-border flows. But split between all the people living in extreme poverty around the world, this equates to just $223 of ODA per person (or only $85 of CPA). Clearly, aid is a scarce resource, meaning how it is distributed is all the more important.

But it seems global aid could be better allocated. For instance, the prevalence of “small country bias” sees aid per capita tending to arbitrarily fall with population size. Whilst many small island states received hundreds or even thousands of dollars in aid per head of population in 2018, Nigeria received just $17. More concerningly, it’s been found that the patterns of foreign aid are frequently better explained by the political and strategic interests of donors, rather than the need or merit of recipients. The phenomenon of aid fragmentation also creates challenges for coordination between providers, which is essential to ensure an optimal allocation of global aid. What coordination there is seems to go in the wrong direction, with donors following the herd rather than plugging the gaps in global aid allocation.

Given these issues of aid allocation and the Sustainable Development Goals’ pledge to leave no one behind, several indicators have been developed to measure the extent to which providers address the problem of under-aided countries.

Some measures identify a particular group of countries—least developed countries (LDCs) or fragile states, for instance—and then reward providers based on the share of aid they allocate to this group. In our Commitment to Development Index (and planned for our QuODA indicators), we take another approach: a measure that rewards providers’ focus on poorer countries by weighting their aid allocations based on the recipient country’s income level, with aid directed towards poorer countries scoring higher.

Still, whilst these measures recognise a focus on groups of countries in need, they do not take account of whether other providers are already supporting them. Indeed, if every provider individually sought to maximise its score on these types of indicators, the implication is that the entire global aid budget would be allocated to the poorest country, or just amongst LDCs or fragile states (to use the above examples). Such prescriptions do not solve the problem of global aid allocation. They can imply that too much aid should go to some countries, ignoring any absorption constraints; whilst also withdrawing aid from others which nevertheless face real needs.

One relatively sophisticated measure of aid allocation—the Donor Efficiency in Targeting Extreme Poverty (DEEP) index developed by Marcus Manuel and co-authors in 2018—addresses this shortcoming by assessing aid allocations for each recipient country compared to an optimum based on the 29 countries' most in need. Providers are then scored based on how closely their actual aid allocations match the ideal distribution with Ireland, Belgium, and Norway being the most "efficient" at targeting extreme poverty.

These approaches also face a limitation, however, in that they suggest a single allocation for all providers of aid with limited division of labour amongst providers. Ultimately, we are concerned with whether the global system as a whole allocates aid optimally, rather than whether the allocations of individual providers conform to the ideal distribution. Allowing for specialisation amongst providers may also facilitate aid effectiveness. For instance, it may make sense for France to focus its attention on Francophone countries. And we should expect for donors like the World Health Organization and Global Environment Facility to focus on different countries according to their relative specialisms.

Our proposed method: Moving towards a global optimal

We base our measure on an optimal global aid allocation estimated for all recipients, expressed as a percentage of total world CPA. Our proposed indicator captures the extent to which each provider moves the global distribution of aid towards or away from this optimal allocation.

It does so by measuring the gap between the actual and ideal distribution of global CPA, calculated as the squared differences between actual and optimal aid allocations summed across all recipients. It is then determined whether each individual aid provider causes this gap to rise or fall. The squared term implies that performance is particularly sensitive to whether a provider exacerbates or alleviates the most severe cases of over- or under-country support.

Our indicator thus addresses the major counterintuitive implications of previous approaches to evaluating aid allocation: we avoid the prescription that every donor should prioritise the same countries and allow for a flexible and legitimate division of labour between aid providers.

But what is the optimal aid allocation?

Underlying our measure is an explicit value judgement of what the optimal global aid allocation should look like. Though there is no definitive agreement on what constitutes an optimal allocation of aid allocation, we identify three options, and we welcome other suggestions.

There are surprisingly few published normative models that attempt to allocate global aid across all recipients. The best known—and supported with funding from all bilateral DAC donors—is the World Bank’s International Development Association (IDA) model. This proposes county allocations which rise with population and the assessed strength of a country’s policies (using Country Performance Ratings, CPR) and fall with GNI per capita. UK officials Stefan Dercon and Nick Lea have produced a similar model to IDA, including an additional term to reflect the time until a country can self-finance its poverty reduction. Manuel’s model provides an alternative ideal aid allocation based on need, though this only covers 29 recipient countries. Finally, a simpler approach would involve allocating aid among countries according to their share of the 689 million people estimated to be in extreme poverty (which could also be adjusted to account for a country’s future growth trajectory).

The official IDA model uses a relatively low-income eligibility criteria, which permits just 27 countries to receive aid in 2018. Therefore, we extend the IDA model to cover all lower-middle-income countries, and make changes to its income-weighting and structure to describe one potential “optimal” global aid allocation. Our adjusted model places more weight on income level, increasing the exponent to -1 in line with Dercon and Lea and with literature on the marginal utility of income. Such a model would suggest a very large share of aid to India, but as India transitions from recipient to donor, and given its reticence in accepting greater volumes of financial support, we limit the allocation to its current level of 5 percent of global aid. We also cap aid at 30 percent of any recipient’s GNI as a reasonable limit on absorptive capacity’ (see here for an overview). Finally, we imputed missing CPR data by predicting their values based on two Worldwide Governance Indicators. Whilst these adjustments are each debatable (comments are welcome), they provide us with one plausible global optimum based on the three core variables in the IDA model.

The second model (one of two models based on levels of extreme poverty) allocates aid to all ODA-eligible countries based upon current levels of poverty. It is based on an equal level of aid to each person living in extreme poverty (PiEP) in 2018 (as above, some $85 per year for each).

The third model, like the second, allocates aid to all ODA eligible countries, but it is forward-looking, with aid assigned to each country based upon the share of person poverty years it is expected to experience between 2018 and 2030. Data for both of these models was sourced from Crespo Cuaresma and co-authors (2018).

Readers can explore results of these three models using figure 1, which presents each recipient country’s actual allocation of global CPA in 2018, expressed as a percentage of the world total. Buttons allow the user to compare:

Each of these optimal allocations has implications on the share of global aid that should be allocated towards particular country groupings (table 1). All three optimums imply significantly more aid should be directed towards LDCs and low-income countries, and away from upper-middle-income countries—though they differ in the magnitude of this redistribution. There is disagreement between these optimums on whether lower middle-income countries and fragile states should receive proportionally more or less aid than current levels.

Table 1. Share of aid received by country groupings under actual and optimal allocations, 2018

Which countries are under- and over-aided?

We can identify under-aided and over-aided countries by comparing the actual distribution of CPA with the optimal allocations determined by each model. Results are presented in figure 2.

Users can switch between optimal aid allocations to explore changes in the results. The full country-by-country results are available at the end of the blog.

Each of these “optimal” models is relatively simple—but as our aim is to produce a single measure of which aid providers are focussing on under-supported countries, we think each would be suitable. We’d be keen to hear about any other models we should consider, and which we should select as the basis of our QuODA indicator. The results on how each provider alleviates or exacerbates under-aided countries will be published when we update our QuODA measures early next year.

The new indicator we propose here provides a tool for donors to understand whether their aid allocations are focused in the right places. A key input into this indicator is the choice of optimal global aid allocation, which will be finalised for our forthcoming edition of QuODA. We hope readers find the results on which recipients appear under-supported useful and look forward to feedback on the choice of model and wider our approach.

Table 2. Aid recipients and measures of under (red)- or over (blue)- support

The last three columns of this table present how the actual share global aid (column 2) differs from the “optimum” according to each of the three models. The underlying calculations are available on request. 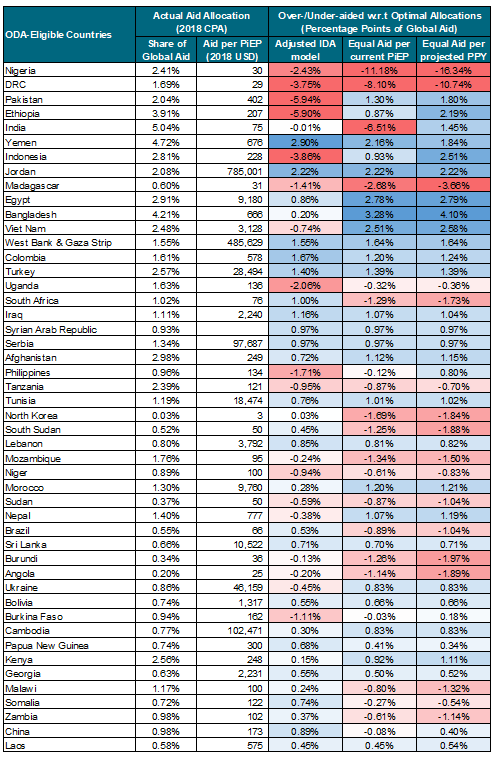 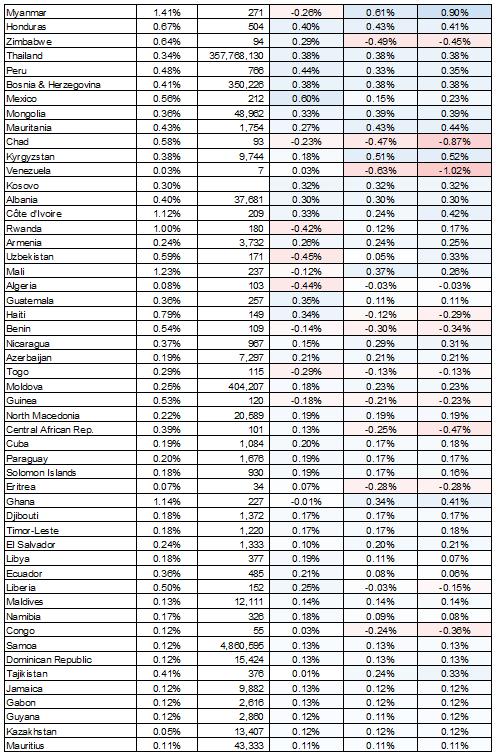 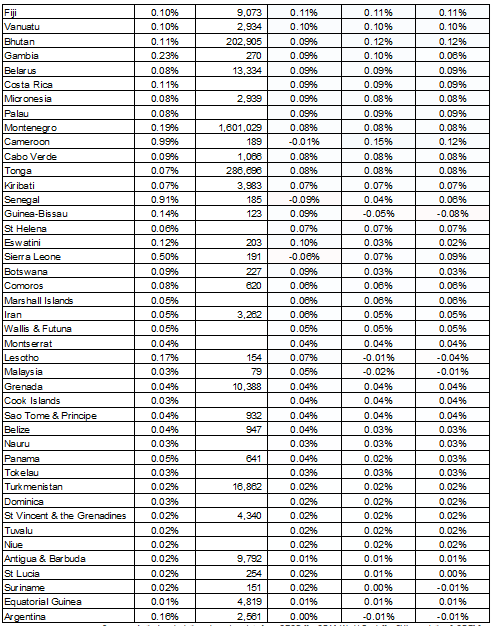 We are grateful for very good advice from Charles Kenny, Paddy Carter, and Rachael Calleja on this blog, and to Arthur Baker for his good technical work on the proposed indicator. As ever, all views and any errors are the authors’.

*This note has been corrected to clarify that the Donor Efficiency in Targeting Extreme Poverty (DEEP) measure does enable providers to specialize in different recipients.