UN agencies are blocking reforms to aid to Syrian refugees. The donors should hold firm. Here’s why, and what they should do.

DFID and ECHO, the EC’s Humanitarian arm, have now asked the UN agencies to make proposals for providing a single cash payment to each eligible Syrian refugee in Lebanon, just as we suggested. The donors have committed $85 million in the first year to cover food and basic needs. (The evidence shows that cash payments are generally more cost effective, enable people to buy what they need, easier to target, and help the local economy. When you give people goods in kind instead they often sell them, at a massive discount, to buy what they really need.)

The High Level Panel warned that there is a risk that the inefficiencies, duplication and turf wars of humanitarian aid are being reproduced in the new cash transfer programmes. We urged instead that the move to cash transfers be used as an opportunity to streamline and simplify the humanitarian system, and introduce more competition and innovation, so helping to move forward long-needed reforms.

The High Level Panel decided not to recommend that there should be a single UN agency responsible for managing all humanitarian cash transfers around the world. Instead we wanted to encourage competition for these contracts between UN agencies, civil society organisations and the private sector, and consortiums of these, to promote innovation and new partnerships, so that we move over time to the most user-centred, cost-effective, secure and technologically-advanced cash transfer systems. But while we don’t want a monopoly cash agency for the world, for any particular refugee population at a given time there is clearly no need for multiple organisations to be managing multiple payments to the same person. That is why we recommended that donors run competitions for who will manage a single cash payment in each context.

Here’s a picture from the DFID and ECHO proposal which shows why a single payment would be an improvement on the current situation, and also offers some clues as to why the UN agencies might feel threatened by it: 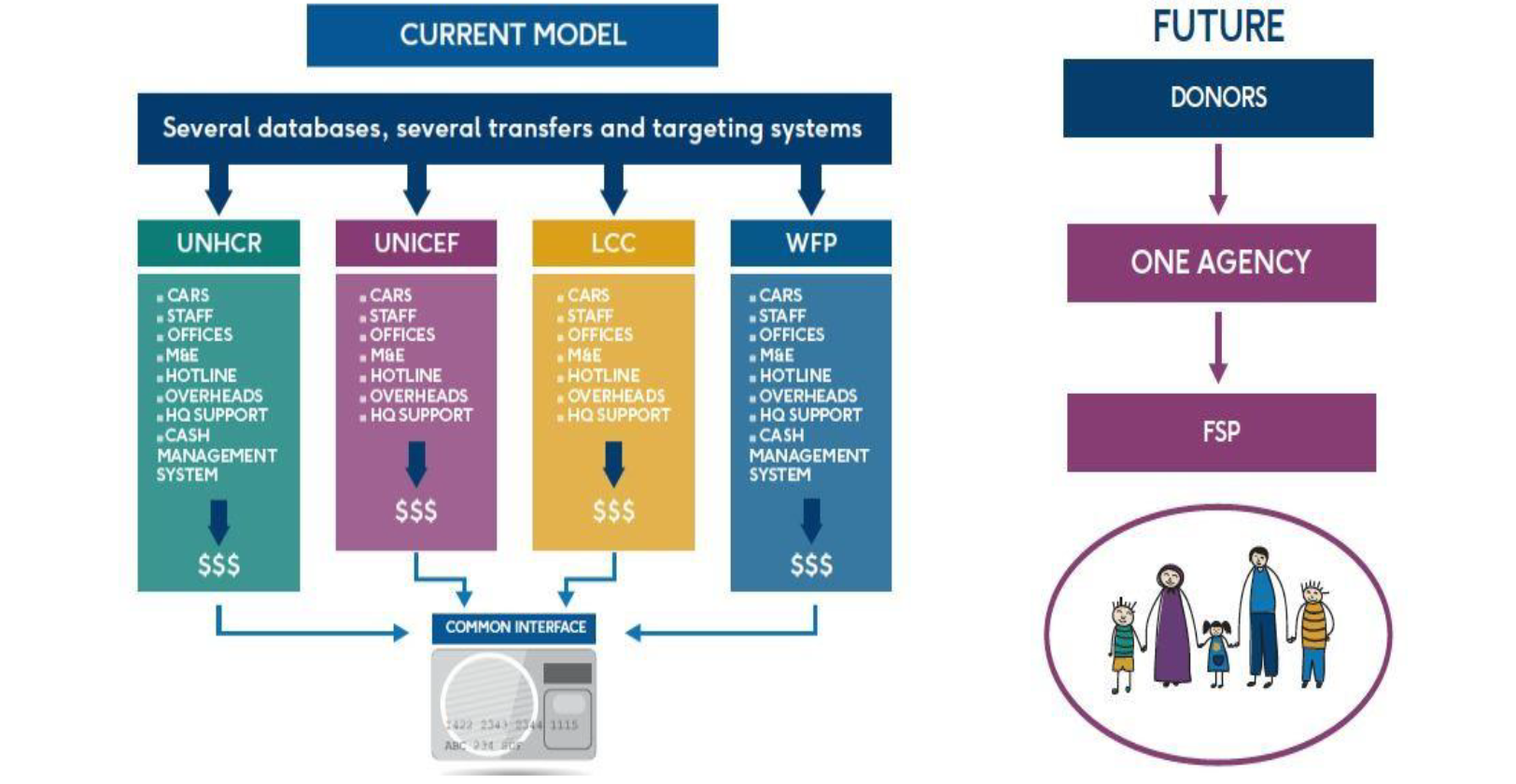 The proposal for a single, joined up cash payment for Syrian refugees in Lebanon has sent shock waves through the humanitarian system. Instead of deciding which agency should manage cash payments in Lebanon, as DFID and ECHO are proposing, UNHCR and WFP insist that several different UN agencies should be involved in making cash payments to the same groups of refugees, using their ‘LOUISE’ platform which they launched publicly in December 2016. They aren’t proposing to divide the refugee population between them, for example by covering half each: they are insisting that they must both make payments to all the eligible refugees.

There is no reason, other than their own bureaucratic interests, for the UN agencies to insist on this duplication. Each of them wants to be able to boast of coverage of as many of the refugees as possible, and to claim their share of overheads for serving those populations. And neither of them wants to concede ground to the other as a provider of cash payments to refugees. All at the expense of the Syrian refugees for whom the aid is intended.

The UNHCR and WFP think we should appreciate their efforts to coordinate better—and coordination is indeed better than nothing. But coordination is a sorry second best to avoiding unnecessary duplication in the first place. DFID and ECHO are doing the right thing by demanding a single payment to refugees and should not accept coordination as a substitute.

Since this initiative launched in December 2016, there has been no public announcement of progress on awarding this contract. It appears to be deadlocked. If DFID and ECHO cave in to collusive intransigence by the UN, they will be throwing in the towel on the reforms of humanitarian aid envisaged in the Grand Bargain. The UN agencies will heave a sigh of relief, and we will be stuck with decades more of duplication, inefficiency and waste.

DFID and ECHO should now find a way urgently to open this tender up to other service providers—including private sector organisations such as Mastercard and PayPal—to take on the role over which the UN agencies are squabbling. (This may need some tweaking of procurement rules.) That kind of competition would push the UN agencies to improve their offer, or be driven out of this market. And in the long run, that would be better for everyone.

“It is because the UK is such a committed champion of the multilateral system that we will press hard for radical action to raise its performance. The world’s poorest people, and our taxpayers, deserve nothing less.”

This battle with the UN over streamlining aid to Syrian refugees in Lebanon is becoming an intriguing litmus test of whether Ministers and EU officials have the stomach for the fight. Admittedly they are taking on large, politically-influential organisations with whom we need to work. But donors hold all the cards—especially the UK, which is by far the world’s largest donor of multilateral aid. They should use that power to drive reform.