US Aid for Domestic Revenue Mobilization: What, Where, and How Much | Center for Global Development | Ideas to Action Skip to main content

US Aid for Domestic Revenue Mobilization: What, Where, and How Much

Note (December 4, 2017): The data in this blog present the first release of DRM-coded data in the OECD’s Creditor Reporting Service. Please keep in mind the following caveats. The Addis Tax Initiative—and by extension the OECD data—focus on domestic revenue mobilization; the data don’t capture everything within the broader category of domestic resource mobilization (e.g., strengthening and borrowing from domestic capital markets). Furthermore, because this is a relatively new data classification, the comprehensiveness and accuracy of the data are evolving. There are some known gaps in the data presented below. Bottom line, however, we’re pleased a framework now exists to track US (and other donor) investments in DRM; we hope those reporting data will contribute to quality improvements going forward.

Domestic revenue mobilization (DRM) seems set to be a priority area for the US Agency for International Development (USAID) under Administrator Mark Green. In line with emerging international and domestic consensus on the importance of DRM, Administrator Green has repeatedly highlighted the importance of helping countries mobilize their own domestic resources. Furthermore, DRM, which aims to help partner countries better self-finance their own development priorities, is a promising tool for helping select middle-income countries transition away from USAID’s grant-based assistance, another stated priority for Administrator Green (stay tuned for forthcoming research on transition from Sarah Rose and Erin Collinson).

DRM, which supports strengthened tax policy and administration, is not a new objective for US foreign assistance. For many years, USAID, the Millennium Challenge Corporation (MCC), and the Treasury Department’s Office of Technical Assistance (OTA) have been working with countries  to improve tax collection, customs capacity, public financial management, and the like.

The challenge has been in tracking US (and other donors’) support for DRM activities. Historically, there has been very little data on the amount of assistance going to DRM, but this is starting to change. The 2015 Addis Tax Initiative (ATI) provided the first framework to track donors’ support for DRM activities in a systematic manner through the OECD’s Creditor Reporting Service. ATI used this data in its first Monitoring Report, released in July. While the data only covers projects in 2015 so far, it contributes to a better understanding of what US aid agencies are doing in the DRM space and where they are working. If the United States is looking to step up assistance in this area, it will be instructive to understand the landscape of current efforts.

The United States is the second-largest donor to DRM

The United States is the second-largest donor to DRM, behind the United Kingdom. Other major donors include Germany, the World Bank’s International Development Association (IDA), and Norway.

In 2015, the United States delivered $37 million in DRM-focused assistance in 32 countries. USAID contributed the most, disbursing nearly $25 million, followed by MCC ($8.2 million), Treasury ($3.7 million), and the US Trade and Development Agency (a single $8,000 feasibility study in Pakistan).

The type of engagement varies by agency. MCC funded comparatively larger projects, with an average project size of $2.1 million across four projects. On the other end of the spectrum, the average size of the 40 Treasury projects was around $9,000. USAID’s 37 projects had an average cost of $671,000.

The majority of US assistance to DRM (66 percent) is delivered as project-type interventions—for example, training officials, modernizing IT and other equipment, supporting public awareness campaigns and taxpayer outreach, and modernizing tax collection infrastructure. Another 27 percent of DRM funds support US advisors to deliver in-country technical assistance (mostly through Treasury). Additionally, USAID contributed a small fraction (under $1 million) of assistance to multilateral institutions.

The Philippines and Afghanistan are top recipients of US DRM assistance

Consistent with the models of each agency, the MCC is the most focused of the agencies. In 2015, MCC’s DRM projects were limited to only two countries, with one, the Philippines, dominating. By contrast, the work led by USAID and OTA was dispersed more widely. USAID worked in 14 countries, spending an average of $1.8 million per country. Treasury worked in 19 countries, spending an average of only $197,000 per country. 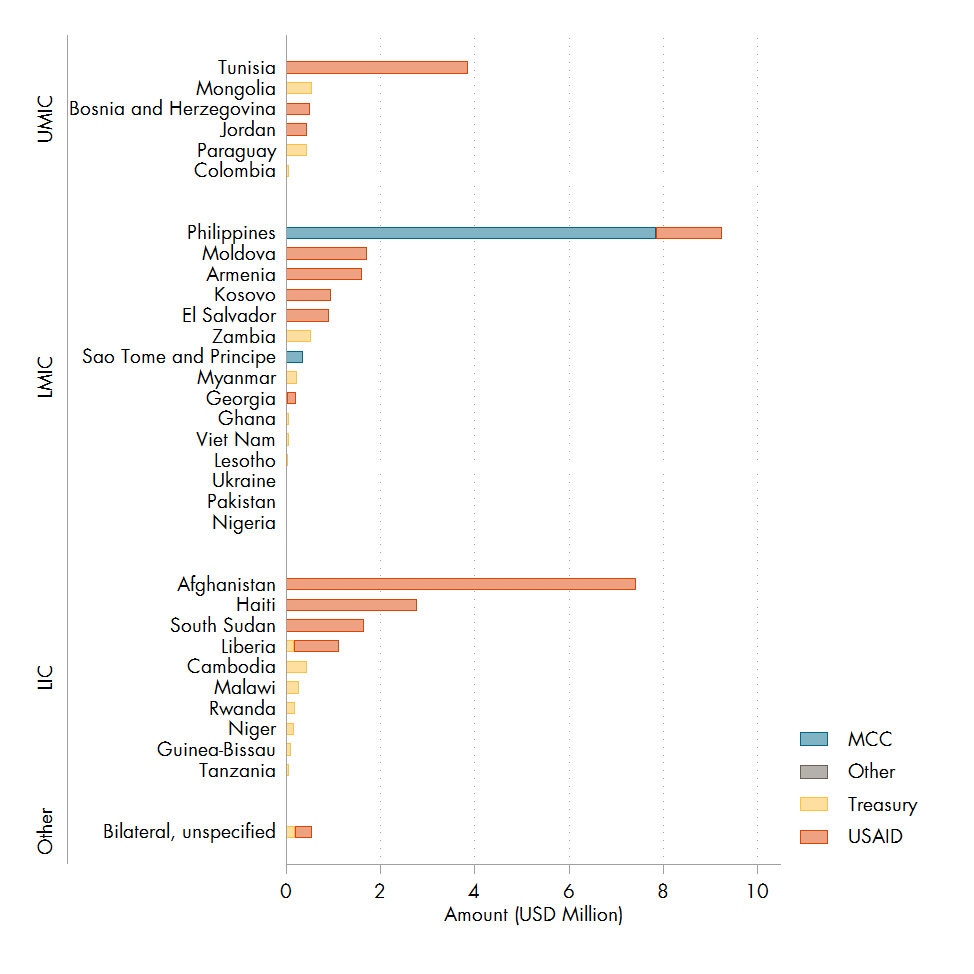 Considerations for expanding US contributions to DRM

As the United States seeks to refine and possibly ramp up its approach to DRM, this analysis points to several considerations that US foreign assistance agencies should think through: 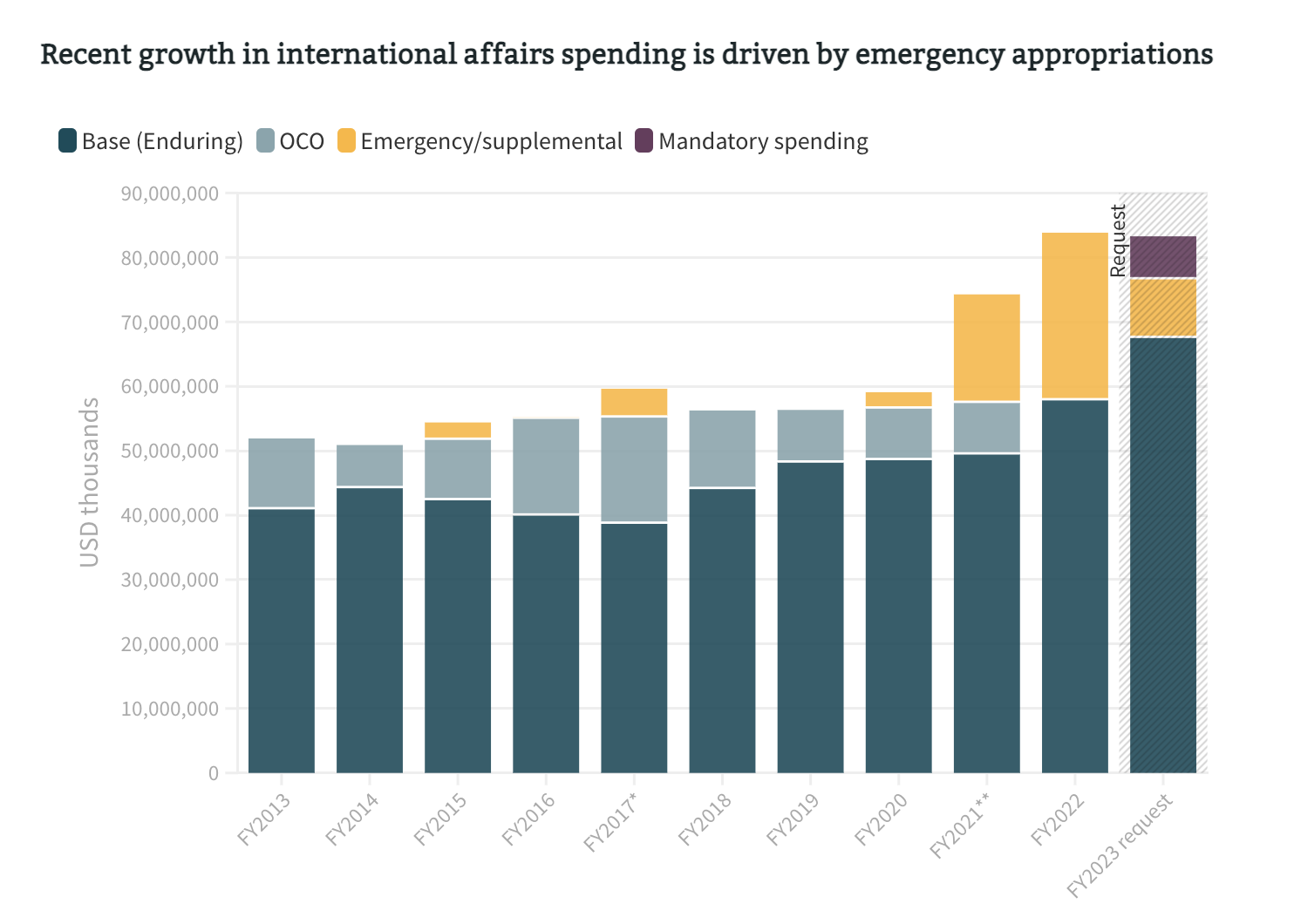