What Is a Resilient Development Agency? Findings From a Survey of Development Leaders | Center for Global Development | Ideas to Action Skip to main content 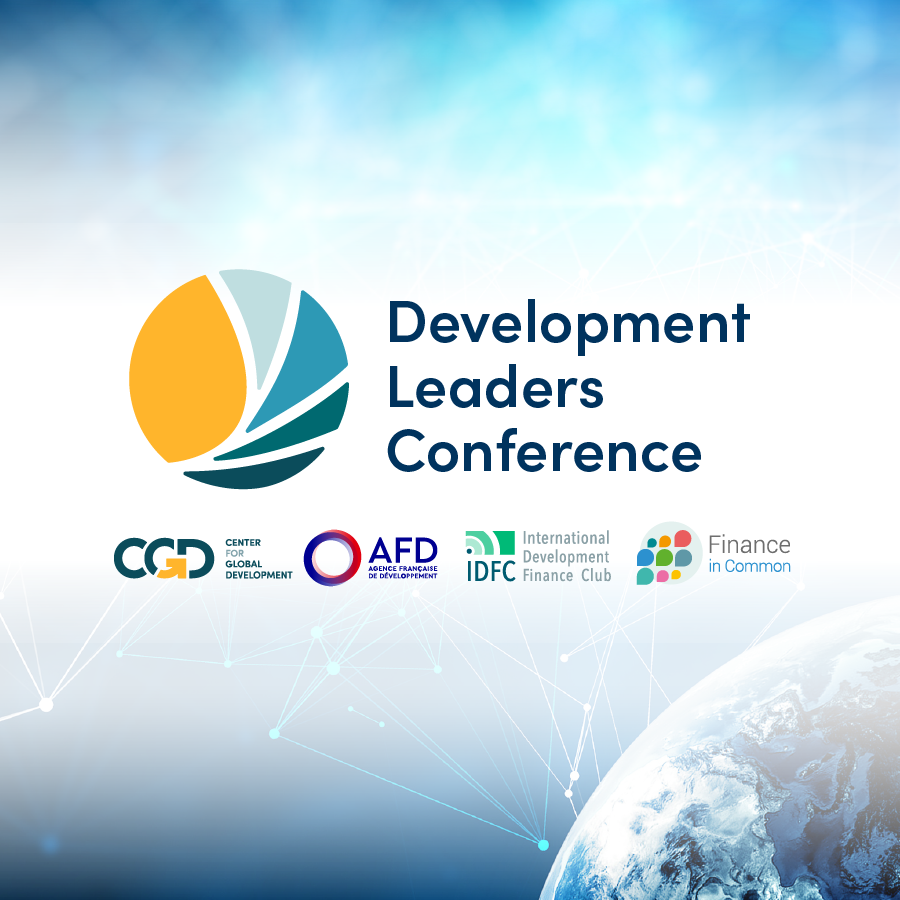 Development agencies are operating in an increasingly complex development landscape, defined by a “perfect long storm” of interconnected challenges. In this context, agencies will face tough choices related to how, where, and on what to spend limited development resources, as well as questions about the capacities, resources, and ways of working needed to remain “resilient” and able to respond effectively to changing demands.

In this blog, I report results from a short survey of development agencies that asked respondents to reflect on the resilience of their agencies. The survey was sent to participants of the 2022 Development Leaders’ Conference (DLC); we received responses from 22 development agencies, including bilateral agencies (14/22), multilateral agencies (4/22) and development finance institutes (4/22). The results show that while respondents think their agencies are mostly resilient, drilling deeper, it seems that agencies still have a way to go on developing new capacities and approaches for partnerships, improving flexibility, and increasing the expertise needed to be fit for the future. In short—there is room for improvement.

Are agencies facing challenges adapting to the changing development landscape?

The starting place for our survey was the discussion held during last year’s DLC, where a key take-away was the need for agencies to re-think their traditional country-focused business model, in light of changing pressures to provide development resources to address global challenges. A question that arose from this conversation was whether the imperative to combine global and local challenges had practical implications for the work of development agencies, and if so, what changes are needed to ensure that agencies remain resilient alongside shifting demands?

We asked respondents whether they were facing challenges integrating global public goods (GPGs) into their agencies’ work, and if so, what these challenges were. Our results show that agencies were split evenly on this question, with half indicating that integrating global and local programming has been challenging. When asked to explain the challenges faced, several pointed to operational constraints, noting that they lacked: 1) the tools or instruments to combine thematic GPG programming with country-based engagement; 2) the financial and human resources to provide GPGs alongside country-focused engagement; and 3) demand from partner countries for GPG-focused interventions, particularly in the wake of acute development crises and needs. Of those that did not face challenges integrating GPGs, most explained that their agencies are already integrating GPGs into country-programming strategies, with several stressing that such integration was crucial given that the impact of global challenges is felt in local contexts.

We then asked respondents to explain their answers and tell us why their agencies were or were not resilient. The answers revealed a series of common traits, that when brought together, perhaps indicate a simple understanding of the factors associated with resilient development agencies. Figure 1 shows a word cloud made from a streamlined version of the responses (without joining words or agency identifiers). 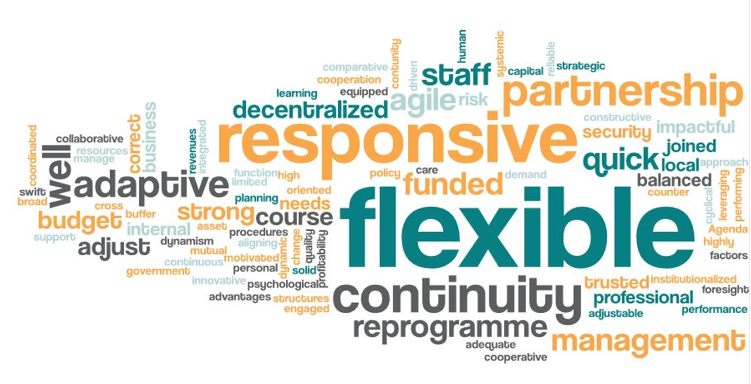 Based on 22 long-answer responses.

This analysis found that most respondents pointed to flexibility and responsiveness as key traits that explain the resilience (or lack thereof) of their agency. Respondents suggested that resilient agencies have flexible budgets that can be re-programmed in response to emerging crises or changing priorities, and flexible instruments that can be drawn upon to respond to changing demands. They similarly argued that being resilient meant being responsive, noting the importance of creating the internal procedures, approaches, and tools, that would support quick action in the face of crisis. For some, this meant improving the agility of current internal management structures and practices, primarily to better understand and manage risks. At the same time, respondents noted that resilient agencies embody continuity, and deliver on existing commitments alongside responsive action. Some respondents argued that continuity was enabled by having adequate funding—to both maintain planned programming and respond to new demands—and the ability to adapt existing projects to changing circumstances.

Perhaps critically, DLC participants noted that resilience is also linked to the political relevance of their agency, and public perceptions of what they do both at home and in partner countries. They noted that resilience was not just about the agency itself, but about the political context that constraints and informs its action; indeed, several expressed that the single biggest exogenous shock to agency resilience is change in government. At the same time, several pointed to the importance of trust for the resilience of their agencies, noting the importance of building and maintaining trust with political masters, voting publics, and partner countries as critical to enabling effective action.

How can agency resilience be strengthened over the next five years?

With most respondents recognizing that there is scope to improve the resilience of their agencies, we asked survey participants to describe the changes they would like to see over the next five years to strengthen the resilience of their agencies in the years ahead (Figure 2). The most frequent response (43 percent) showed that participants hoped to see their agency become better equipped to engage in more active partnerships for development. In many cases, respondents noted that cooperation was necessary to share, leverage, and combine information, resources, and expertise, to strengthen development outcomes. They acknowledged that addressing the challenges of the day—and achieving the 2030 Agenda—required greater cooperation across different actors both within their own governments and across the wider development system, to bring together the skills and resources available to improve results.

In addition, respondents identified three other factors to improve agency resilience, each of which was noted by 29 percentof respondents. First, respondents noted that flexible funding was seen as a priority, with several highlighting the need to adapt slow or sticky funding processes which they saw as hindering the ability for their agency to react quickly in response to crises. Yet flexibility, particularly on funding, brings with it the risk that spending will be reallocated to respond to crises, potentially in ways that partner countries loose out (think reallocating fixed ODA budgets to cover in-donor refugee costs, for instance). Second, respondents noted the need to improve internal practices, particularly on human resources, with several agencies—primarily bilateral development agencies—mentioning the need to improve staff retention, development, and satisfaction. Others suggested there was a need to improve internal organizational cultures to strengthen innovation. Third, many also noted the need to increase their agency’s expertise and professional capacity, particularly in relation to emerging and global challenges, as well as to strengthen knowledge of local contexts.

Figure 2: What changes would you like to see in the next five years to ensure your agency's continued resilience? 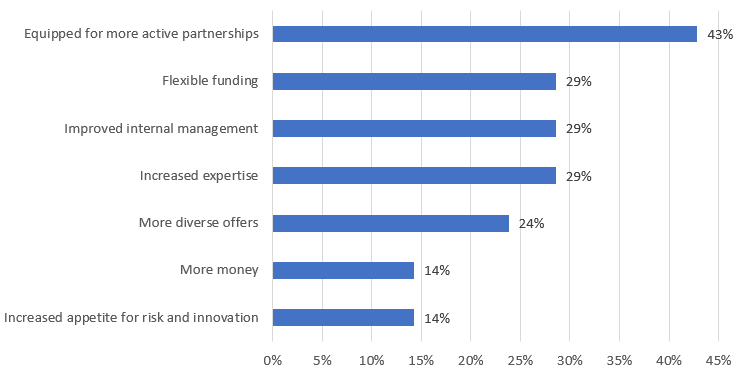 Based on 21 long-answer responses. These responses were reviewed and coded by two CGD staff and in many cases, answers touched on more than one theme.

Development agencies fit for the future?

Development agencies have always been creatures of change, adapting to the challenges, contexts, needs, and domestic contingencies of the day. At a time when progress towards the SDGs is at severe risk; when demands placed on development agencies to support global and local challenges are growing; and where some countries face political contexts that are increasingly skeptical to development and cooperation; agencies caught unaware and that are too rigid to adapt, will face problems. In response, agencies will need to reinvent themselves and adapt their strategies and operations to remain relevant in this time of great challenge and uncertainty.

The author would like to thank Beata Cichocka for her research support and Mikaela Gavas for her helpful comments.