Will PEPFAR “Acceleration” Put Its Money Where Its Mouth Is?

In 2017, the President’s Emergency Plan for AIDS Relief (PEPFAR) released a new Strategy for Accelerating HIV/AIDS Epidemic Control (2017-2020). The strategy identified 13 “priority high-burdened countries” where PEPFAR would focus on accelerating progress toward “epidemic control”—a point at which the annual number of new HIV infections falls below the number of annual deaths among HIV-positive individuals, implying a decrease in the total population living with HIV. (My colleague Mead Over defined this point as the “AIDS transition” in 2010.) Yet the strategy did not explicitly promise that these countries would receive additional funding, and the administration’s overall budget request for FY2018 constituted a decrease from prior levels. For outside observers, the extent and likelihood of consequent funding reallocations among PEPFAR countries—and the implications for the countries left off the prioritized list—remained open questions.

Now, with the release of PEPFAR’s FY2018 and FY2019 budget requests, we have our first signals: without congressional intervention, the “acceleration” strategy appears intended to involve meaningful reallocations of funding between countries. Of course, budget requests are not the final word; Congress has already rejected proposed budget cuts to PEPFAR for FY2018, for example, and is widely expected to do the same for FY2019. Nonetheless, the request offers some initial insight into the thinking of PEPFAR leadership—and what the “acceleration” strategy might mean in dollars and cents, at least if overall budget cuts actually came to pass. 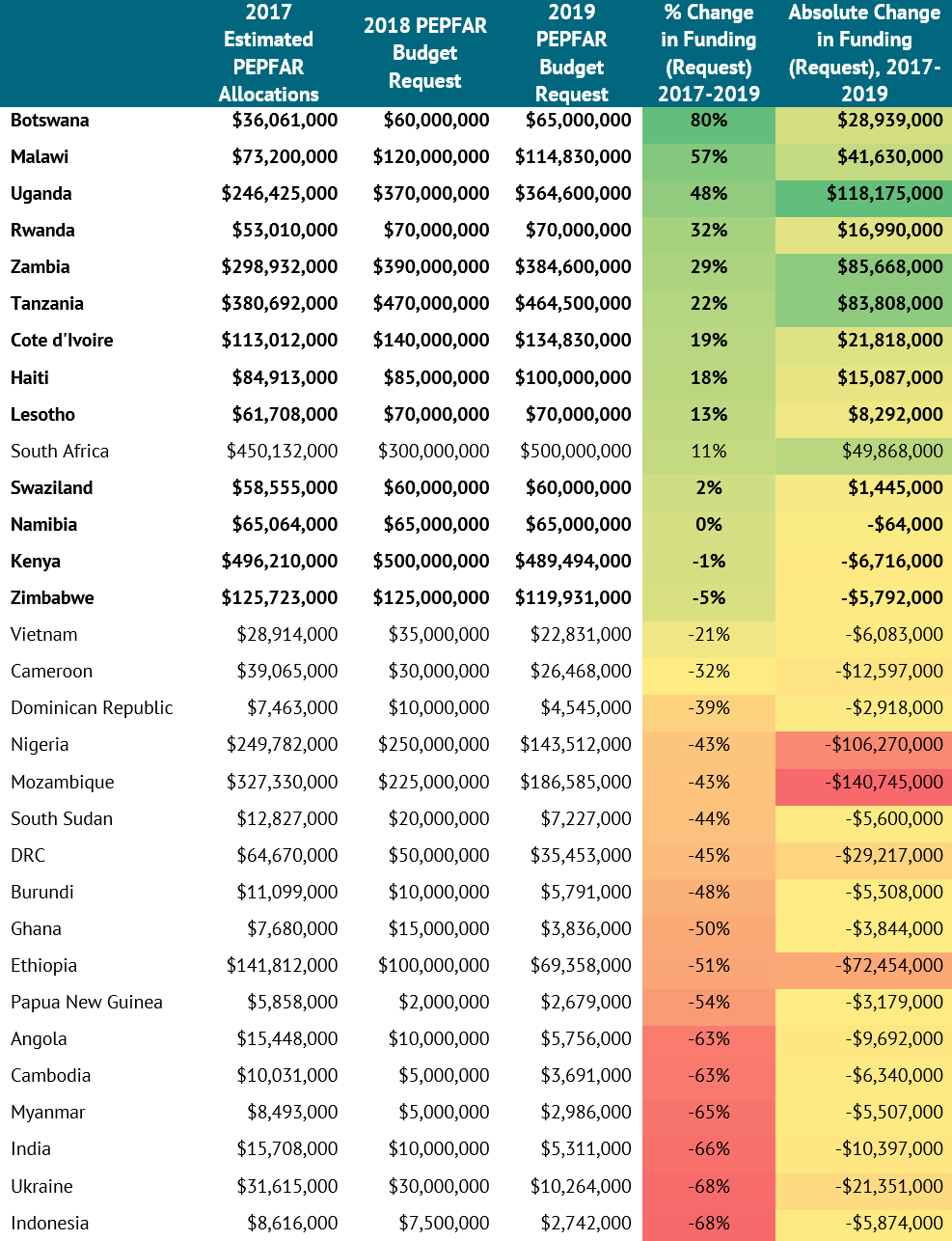 On the flip side, those countries left off the prioritized list received budget requests that would correspond to significant funding reductions if realized. Apart from South Africa (again), every non-prioritized country saw its PEPFAR budget request decrease by at least 20 percent relative to FY2017 actuals, and almost all by 40 percent or more. The average non-“acceleration” country saw a funding request corresponding to a 47 percent cut from FY2017 actuals—$23.7 million in absolute terms. In Nigeria and Mozambique, the budget request would imply a funding decrease of more than $100 million between FY2017 and FY2019.

Dramatic numbers aside, there are still several open questions:

I’m eagerly awaiting release of the next round of Country Operational Plans for further clarity on some of these points; I plan to update this table as soon as we have firm numbers. For now, however, it’s clear that money talks—and these figures demonstrate that PEPFAR’s “acceleration” strategy is a serious endeavor, backed up by the potential for large reallocations between its target countries.