The Post-Doctoral Research Fellowship at the Center for Global Development is a one year term appointment that provides young scholars an opportunity to apply their research skills in an active policy environment. During their year at the Center post-doctoral fellows are encouraged to pursue  their individual research agendas’, while collaborating with and seeking feedback from CGD experts, participating in CGD seminars and events, and taking advantages of the research support of CGD research assistants. Our previous postdocs have subsequently gone on to tenure track appointments at Stanford, UPenn, U.N.C. Chapel Hill, Yale, Tufts, N.Y.U., Columbia, U.C. San Diego, the University of Maryland, Georgetown University, the University of Pittsburgh, and the University of Houston.

Recruitment for the postdoctoral research fellowship takes place each fall. 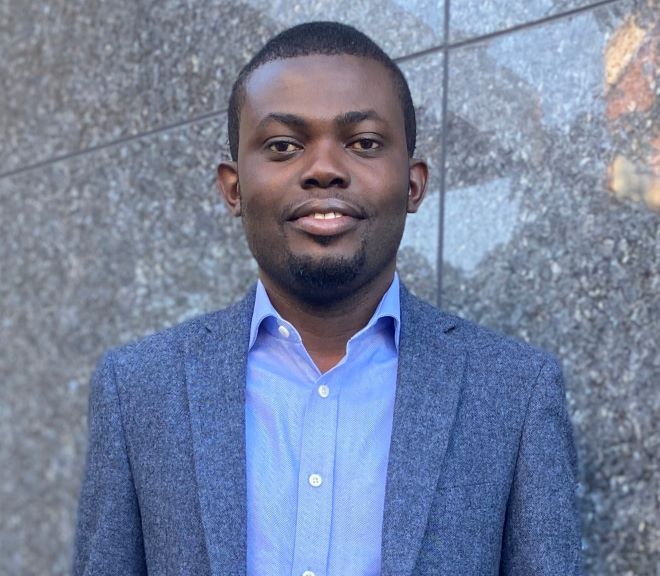 Kwabena Krah is a recent PhD from the Department of Agricultural and Consumer Economics at the University of Illinois Urbana-Champaign and a postdoctoral fellow at the Center for Global Development. Kwabena’s research is centered on microeconomic questions related to poverty and agrarian change in low-income countries. His current work focuses on the relationship between crop price risk and smallholder land-use decisions, the development and functioning of land markets, and processes of agricultural technology adoption. He has worked with the World Bank and the International Fund for Agricultural Development (IFAD) as a consultant. Kwabena holds a BSc. Agriculture and MSc. Agricultural Economics from the University of Cape Coast, Ghana, and Mississippi State University respectively.

Somya Singhvi is a recent PhD from the Operations Research Center at MIT and a postdoctoral fellow at the Center for Global Development. His thesis research focused on using a combination of data-driven analytics and field based research to improve the operational efficiency and social welfare in agricultural supply chains and markets of developing countries. Singhvi has collaborated with multiple organizations that are working with smallholder farmers in India and led successful field implementation of the proposed solutions. Prior to his PhD, Singhvi obtained a B. S. (Hons) in Operations Research & Engineering from Cornell University. He will start as an assistant professor at the University of Southern California’s Marshall School of Business in April 2021.

M. R. Sharan is a recent PhD from the Harvard Kennedy School of Government and a postdoctoral fellow at the Center for Global Development. His PhD research focused on questions centred around the political economy of rural Bihar in India. He has worked as a researcher and policy economist, with research organizations, state governments and the central government in India. Prior to his PhD, Sharan obtained a B. A. (Hons) and an M. A. in Economics from the University of Delhi. He will start as an assistant professor at the University of Maryland's Agricultural and Resource Economics Department in January 2021. His debut novel, Blue, was published worldwide by Harper Collins (2014). His second book, a narrative non-fiction account of village politics in Bihar, is being published by Amazon Westland's Context imprint in early 2021.

John Firth is a postdoctoral fellow at the Center for Global Development. His research interests lie in development economics, trade, and political economy. Ongoing projects focus on infrastructure policy, foreign bribery laws, and productivity in nonprofit organizations. Firth holds a PhD in Economics from MIT and a BA in Philosophy from the University of Notre Dame. He also worked for two years as an India-based Research Associate with the Jameel Poverty Action Lab. In Fall 2019, he will join the faculty in Economics at the University of Notre Dame.

Agustina Paglayan joined the faculty in Political Science and Public Policy at the University of California, San Diego in the Fall of 2018. Motivated by her experience growing up in Argentina and by her prior work at the World Bank and the IDB, Paglayan’s research seeks to explain why some politicians but not others adopt public policies conducive to economic development. She focuses on understanding the political economy of education policy choices, given the importance of education for individual learning, poverty reduction, and economic growth.

Gaurav Khanna is a member of the Public Policy faculty at the University of California – San Diego. His research focuses on education, high skill immigration, infrastructure policy, public-works programs, and conflict. He received his PhD in economics from the University of Michigan with an emphasis on development economics, labor economics, and applied econometrics.

Omar García-Ponce is an Assistant Professor of Political Science at the University of California Davis. García-Ponce’s interests are broadly in violence, politics, and development. He has two main lines of ongoing research. One examines how armed conflict affects political behavior and the development of institutions. The other is on the political economy of organized crime, with a focus on the US-Mexico drug trade. His work appears in the American Political Science Review, Electoral Studies, and the Journal of the European Economic Association. He received his PhD in from New York University.

Heather Schofield is assistant professor in the Department of Medical Ethics and Health Policy at the University of Pennsylvania. Schofield’s interests are broadly in development, health, and behavioral economics. Her ongoing research includes the role of health human capital in economic decisions; dynamic complementarities in education; and the role of financial and social incentives in promoting healthy behaviors. Heather completed a PhD in business economics and an MS in global health and population at Harvard University.

Matt Collin is an economist at the World Bank. His research currently focuses on the adoption and impact and of property rights in developing countries as well as the role of property rights in large scale land consolidation. Matt holds a D.Phil in Economics from the University of Oxford, and previously worked as an ODI Fellow in the Ministry of Finance, Malawi, as a research fellow at the Center for Global Development Europe, and as a research officer at the Centre for the Study of African Economies.

Willa Friedman is an Assistant Professor of economics at the University of Houston. Friedman's research focuses on how individual behaviors are shaped by their institutional contexts and how these behavioral responses determine the ultimate impacts of proposed or implemented policies. She holds a PhD in Economics from University of California - Berkeley.

Andrew Zeitlin is an assistant professor at the Georgetown University’s McCourt School of Public Policy. His research focuses on the interplay between workplace incentives and intrinsic motivation in the provision of public services and the role of attitudes toward risky outcomes in shaping decisions in health and agriculture. He holds a PhD in Economics from Oxford University.

Laura Paler is an assistant professor in the Department of Political Science at the University of Pittsburgh. Her research focuses on how different sources of government revenue (such as natural resource rents, foreign aid, and taxation) affect accountability in developing countries. She also studies how information and transparency affect voters as well as the causes of conflict and post-conflict reintegration. She holds a PhD in Political Science from Columbia University.

Milan Vaishnav is an associate in the South Asia Program at the Carnegie Endowment for International Peace. His primary research focus is the political economy of India, and he examines issues such as corruption and governance, state capacity, distributive politics, and electoral behavior. He holds PhD in Political Science from Columbia University.

Jessica Goldberg is a non-resident fellow at the Center for Global Development and an assistant professor of Economics at the University of Maryland. Her research focuses on how financial market imperfections, behavioral factors, or other obstacles to borrowing and saving affect decisions about working and consuming. She holds her PhD in Economics and Public Policy from the University of Michigan.

Simeon Nichter is an Assistant Professor of Political Science at University of California - San Diego. Simeon Nichter's research explores the political voice of poor and marginalized populations in emerging democracies, with central reference to Latin America. He holds a PhD in political science from UC Berkeley.

Oeindrila Dube is the Philip K. Pearson Professor of Global Conflict Studies at the University of Chicago, Harris School of Public Policy. Her broad research interest lies in the political economy of conflict and development. Much of her work focuses on understanding the causes and consequences of violence in the developing world. Her research affiliations include the National Bureau of Economic Research (NBER), Bureau for Research and Economic Analysis of Development (BREAD) and the Centre for Economic Policy Research (CEPR).

Jenny C. Aker is a non-resident fellow at the Center for Global Development and an associate professor of Economics at Tufts University. Her research approach uses field experiments to better understand real-world development problems and to link research with policy and implementation. She holds a PhD in Agricultural Economics from University of California-Berkeley.

Chris Blattman is the Ramalee E. Pearson Professor of Global Conflict Studies at The University of Chicago, in the Harris School of Public Policy. He is an economist and political scientist who studies poverty and violence in developing countries, and has worked mainly in Colombia, Liberia, Uganda, and Ethiopia. Dr. Blattman was previously faculty at Columbia and Yale Universities, and holds a PhD in Economics from the University of California at Berkeley and a Master’s in Public Administration and International Development (MPA/ID) from the Harvard Kennedy School.

Harsha Thirumurthy is an associate professor of health policy at the University of Pennsylvania. His research focuses on the research and policy work in the areas of HIV/AIDS and nutrition in India and parts of East and Southern Africa. He holds a PhD in Economics at Yale University, and he was previously an associate professor of Health Economics at the University of North Carolina at Chapel Hill.

Raquel Gomes is the Research and Evaluation Coordinator for USAID’s office of Microenterprise and Private Enterprise Promotion.  Her work focuses on improving the use of development evaluations to guide programming and understanding how to apply a systems approach to development. Her research at CGD focused on the pro-poor impact of the US policies abroad and on girls’ education. She holds a PhD from Massachusetts Institute of Technology’s Department of Urban Studies and Planning.

James Habyarimana is the Provost's Distinguished Associate Professor at the Georgetown University McCourt School of Public Policy. His main research interests are in Development Economics and Political Economy, in particular the issues and constraints in health, education and the private sectors in developing countries. In health he is working on understanding the impact of policy responses to the HIV/AIDS epidemic in Africa and evaluating a number of health improving interventions in road safety and water, sanitation and hygiene. In education, his work focuses on identifying programs and policies to improve access and quality of secondary schooling. His primary regional focus is Africa. He has been a non-resident fellow at the Center for Global Development, and received his PhD in economics from Harvard University.

Jeremy Weinstein is a Professor of Political Science and Senior Fellow at the Freeman Spogli Institute for International Studies, both at Stanford University. He is also a non-resident fellow at the Center for Global Development. His research focuses on civil wars and political violence; ethnic politics and the political economy of development; and democracy, accountability, and political change. He has also worked at the highest levels of government on major foreign policy and national security challenges, engaging in both global diplomacy and national policy-making. Between 2013 and 2015, Weinstein served as the Deputy to the U.S. Ambassador to the United Nations and before that as the Chief of Staff at the U.S. Mission to the United Nations. He holds a PhD in in political economy and government from Harvard University.