Delivering on a Data Revolution in Sub-Saharan Africa

Despite improvements in censuses and household surveys, the building blocks of national statistical systems in sub-Saharan Africa remain weak. Measurement of fundamentals such as births and deaths, growth and poverty, taxes and trade, land and the environment, and sickness, schooling, and safety is shaky at best. The challenges are fourfold: (1) national statistics offices have limited independence and unstable budgets, (2) misaligned incentives encourage the production of inaccurate data, (3) donor priorities dominate national priorities, and (4) access to and usability of data are limited. The Data for African Development Working Group’s recommendations for reaping the benefits of a data revolution in Africa fall into three categories: (1) fund more and fund differently, (2) build institutions that can produce accurate, unbiased data, and (3) prioritize the core attributes of data building blocks. 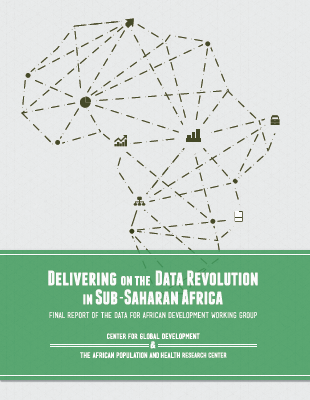 This brief is based on the Data for African Development Working Group report, a joint effort of the African Health and Population Research Center and the Center for Global Development. The report is authored by Amanda Glassman, Alex Ezeh, Kate McQueston, Jessica Brinton, and Jenny Ottenhoff.

Why Data, Why Now?

Governments, international institutions, and donors need good data on basic development metrics to plan, budget, and evaluate their activities. To be valuable, such data must be accurate, timely, disaggregated, and widely available. Statistical systems that work to improve policy and enhance accountability allow all stakeholders to freely exchange high-quality data to ensure that funding and development efforts are working.

Nowhere is the need for better data more urgent than in sub-Saharan Africa.

There have been gains in the frequency and quality of censuses and household surveys,[1] but the building blocks of national statistical systems in sub-Saharan Africa remain weak. These building blocks, fundamental to the calculation of almost any major economic or social welfare indicator, include data on births and deaths, growth and poverty, taxes and trade, land and the environment, and sickness, schooling, and safety. The World Bank’s former chief economist for Africa describes the challenge:

Estimates of poverty represent robust statistics for only 39 countries for which we have internationally comparable estimates [in 2005]. And they are not even comparable over the same year. Only 11 African countries have comparable data for the same year. For the others, we need to extrapolate to 2005, sometimes (as in the case of Botswana) from as far back as 1993.[2]

The nascent post-2015 UN development agenda is generating momentum for a worldwide data revolution and is highlighting the need for better development data in Africa and elsewhere. But the early efforts focused on collecting more data, not necessarily better data, may divert attention from the underlying problems surrounding the production, analysis, and use of basic data that have inhibited progress so far.

Often these problems are not merely technical but the result of implicit and explicit incentives and systemic challenges. Both donors and countries need take truly revolutionary steps to address the core problems underlying bad data in the region.

The Challenges of Data Collection and Use in Africa

All challenges must be addressed to make progress.

National statistics offices (NSOs) are the backbone of data production and management in most African countries; they produce official statistics and support data activities at other national agencies to create accurate and timely data for decision making. NSOs must be able to produce reliable, accurate, and unbiased statistics that are protected from outside influence. Most NSOs in Africa, however, are constrained by budget instability and a lack of autonomy that leave them vulnerable to political and interest-group pressures. Indeed, budget limitations and constraints on capacity are two of the most frequently cited reasons for lack of progress on statistical capacity in sub-Saharan African countries.

Of the 54 member countries of the African Union, only 12 are considered to have an autonomous NSO according to Regional Strategic Framework for Statistical Capacity Building in Africa (2010). [3] In the remaining 41 countries, statistics fall under the jurisdiction of another government ministry. NSOs that lack autonomy often do not manage their own budgets and receive little government funding. They must therefore rely on donors to fulfill even their most basic functions. In many countries, nearly all core data collection activities are funded primarily by external sources.[4] Without functional autonomy and predictable national funding of NSOs, other efforts to address data systems challenges in Africa are not likely to succeed.

Discrepancies between administrative data and household survey-based estimates in education, agriculture, health, and poverty mean that many internationally published numbers are inaccurate. In many low-income countries, for example, local units have an incentive to exaggerate school enrollment when central government and outside funders connect data to financing. It is hard to insulate data from politics. The development of intrinsic and extrinsic checks can systematically avoid the resulting data inaccuracies.

These and other challenges related to incentives and funding are often rooted in conflicting objectives between donors and countries. International donors use data to inform allocation decisions across countries while governments use data to make budgetary decisions at more micro levels. Similar tensions also exist within countries, between the national and local levels of government. This difference affects the demand for and use of data. In some African countries, it contributes to inaccuracies in the data published by national and international agencies.

Challenge 4: Access to and Usability of Data Are Limited

More open data is needed to improve or inform policies and to hold governments and donors accountable.

Even the best, most accurate data is useless if it is not accessible to governments, policymakers, civil society, and others in a usable format. Many NSOs and other government departments are hesitant to publish their data, lack the capacity to publish and manage data according to international best practices, or do not understand what data users want and how to get that information to them.[5] These problems are critical because more open data is required to improve or inform policies and to hold governments and donors accountable.

The Way Forward: Actions for Governments, Donors, and Civil Society

Action around a data revolution in Africa should begin by addressing the underlying problems surrounding the building blocks of national statistical systems, including their production, analysis, and use. These changes must be initiated and led inside governments, but donors and local civil-society groups also have a major role to play. The data revolution must help modify the relationship between donors, governments, and the producers of statistics and work in harmony with national statistical priorities.

The data revolution must help modify the relationship between donors, govs, & producers of statistics.

The following recommendations for action directly address one or more of the problems outlined here. Taken together, they can help build a solid foundation for a true data revolution that can be led and sustained in the region.

Current funding for statistical systems and NSOs is not only insufficient but structured in ways that do not help produce and disclose accurate, timely, and relevant data, particularly on the building blocks. The working group identified three strategies for donors and governments to fund more and differently that will better support national statistical systems:

A “data compact” could help create incentives for greater progress and investment in good data.

Many of the political economy problems are related to political and interest-group influence or rigid procedures in civil service and government administration that limit the ability to attract and retain qualified staff. However, governments cannot be afforded greater autonomy without greater accountability for more and better data. With these issues in mind, the working group recommends the following actions:

Although 80 percent of African countries conducted a census in the past decade, Africa still invests too little in the building blocks of data, and in some cases political economy challenges distort the data. Future efforts should prioritize funding and technical assistance to strengthen the core attributes of data building blocks.

[4] Morten Jerven, Poor Numbers: How We Are Misled by African Development Statistics and What to Do about It (Ithaca, NY: Cornell University Press, 2013).