South Africa and many other countries hope to aggressively expand wind and solar power (WSP) in the coming decades. This presents significant challenges for power system planning. Success hinges largely on the question of how and where to deploy WSP technologies. Well-designed deployment strategies can take advantage of natural variability in resources across space and time to help minimize costs, maximize benefits, and ensure reliability.

New CGD research shows that low-cost open-source data and software can help navigate this challenge. Results for South Africa suggest that optimizing the deployment of WSP technologies can significantly reduce the cost of greenhouse gas abatement compared to more conventional planning approaches. Advanced modeling techniques could save South Africa an estimated $100 million per year (present value) by 2040. This approach could be translated to other contexts to help guide long-term infrastructure planning as countries prepare to scale up WSP.

From Aspirations to Plans

Introducing large amounts of WSP, however, complicates the planning and operation of power systems. WSP is fundamentally different than conventional fossil fuel and hydroelectric technologies because of its high variability across space and time; WSP is intermittent . In contrast, the magnitude and timing of conventional generation are controlled by plant operators; fossil fuel generators are highly dispatchable.

Replacing dispatchable generation with intermittent WSP makes it more difficult to ensure that electricity is available when needed. The practical challenge lies in determining how to reap the benefits of WSP while simultaneously maintaining reliability and minimizing costs.

Because power systems are large and complex, critical to economic growth and security, and built of long-lived concrete and steel, their development requires comprehensive planning that spans multiple decades.

The key planning question is how and where to deploy WSP infrastructure. Our skill in answering this question — which will require the use of evolving data sources and analytical tools — will largely determine the cost of transitioning to a cleaner, renewables-based future.

A recent CGD working paper I authored (Ummel 2013) shows how such issues can be addressed in the case of South Africa. The government’s stated objective is for WSP to provide more than 20 percent of generating capacity by 2030. A scenario developed by the state-owned utility Eskom envisions WSP penetration potentially reaching 40 percent by 2040. These are ambitious figures in a country that depends on coal for more than 90 percent of its electricity.

I then developed a simple power system model to simulate the economic and environmental performance of different WSP spatial deployment scenarios in the year 2040. The model adjusts the amount of backup gas generating capacity in the system to ensure a minimum level of reliability over 10 years of hourly simulation. A genetic search algorithm identifies WSP deployment patterns across space that minimize the cost of abating carbon dioxide (CO2) emissions.

I use the 2040 Eskom scenario as a “default” example of a conventional approach to WSP planning. Figure 1 shows the implied WSP deployment pattern in 2040. Simulation of this default deployment strategy results in an abatement cost of $26.50 per tCO2 (2010 dollars). 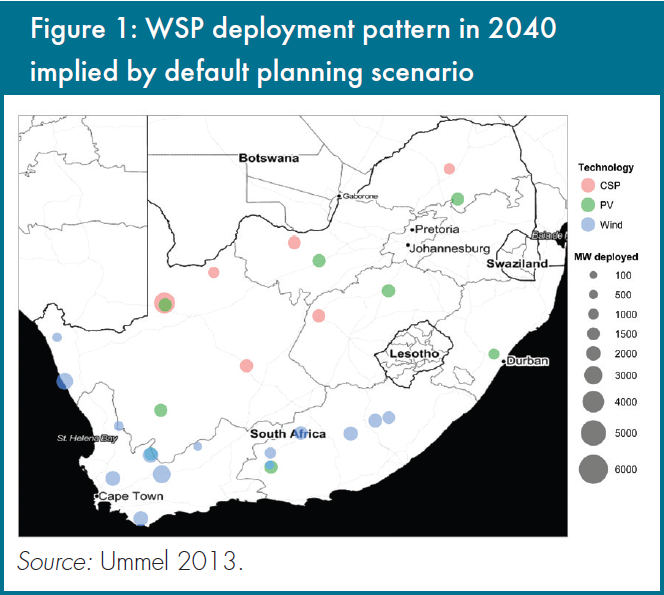 When the WSP deployment pattern is then spatially optimized (figure 2), the cost of CO2 abatement drops to $22.80 per tCO2 — a decline of 14 percent. A model optimizing both the location and relative quantity of competing WSP technologies results in an abatement cost of just $15.70 per tCO2 — a 40 percent decrease. 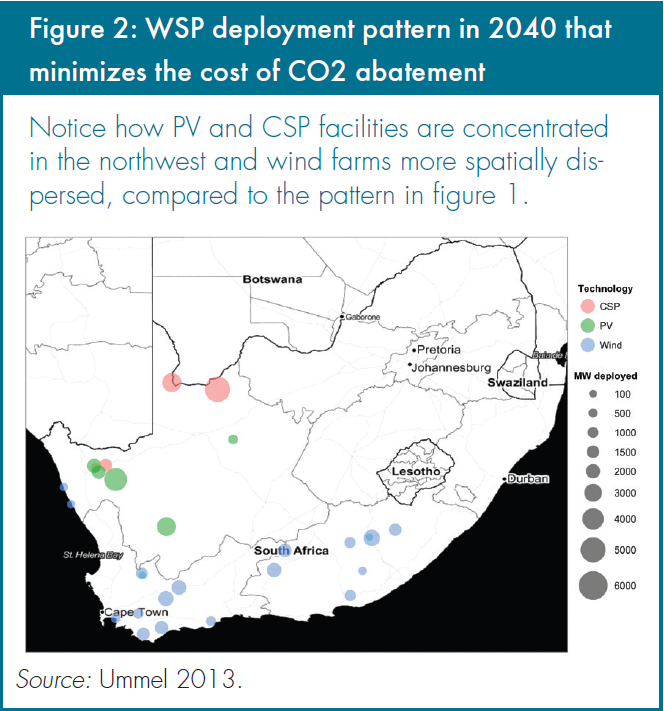 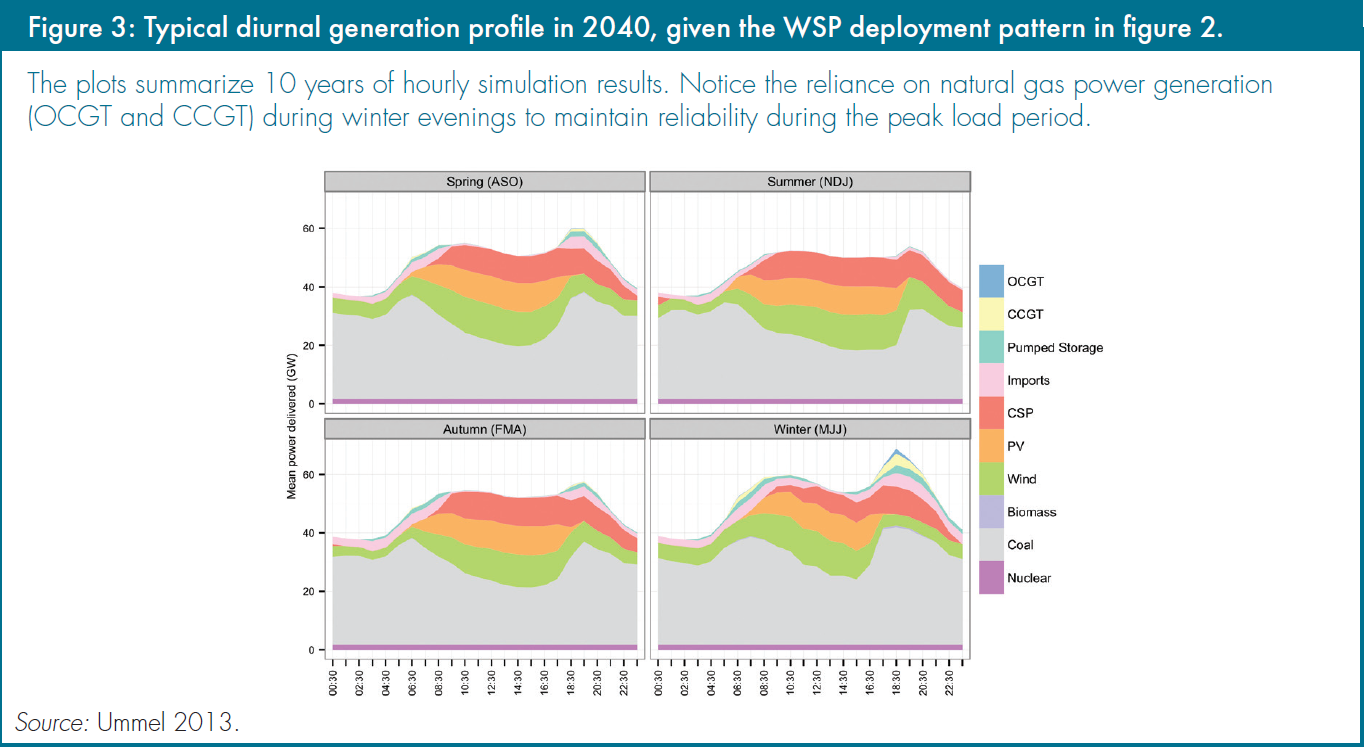 These results are illustrative rather than prescriptive, but they suggest that advanced modeling techniques could save South Africa approximately $100 million by 2040 (present value), compared to more conventional planning approaches.

Additional work is needed to incorporate transmission costs and constraints; simulate system expansion over time; and account for uncertainty in critical cost assumptions. None of these advances poses overwhelming technical challenges, but successful modeling efforts will require buy-in by stakeholders across the power sector.

An integrated deployment and transmission plan to exploit WSP resources across southern Africa, for example, could dramatically alter the economics of renewable energy in the region. Detailed knowledge of the spatiotemporal properties of renewable resources over large areas would be required. In general, the returns to spatiotemporal modeling increase with the size of the region under study.

This study suggests that high-resolution spatiotemporal data and modeling can identify WSP deployment strategies that offer significant savings. This approach does not require large research teams and budgets. With support from in-country stakeholders, low-cost data and techniques can capture the most critical spatiotemporal dynamics and help countries intelligently harness their WSP resources to address climate change, air pollution, and energy security in a cost-effective and reliable manner.

Unlike conventional power technologies, wind and solar power (WSP) is not always available when needed. This reduces reliability, increases costs, and complicates planning for large-scale deployment of WSP. However, open-source data and modeling can help guide the deployment of WSP technologies to ensure reliability and minimize costs by taking advantage of natural spatiotemporal variability.