Restoring US Leadership on Trade and Development

The Trans-Pacific Partnership (TPP) and Transatlantic Trade and Investment Partnership are regional trade deals that could have adverse trade and growth effects on excluded poor countries. US trade policy already discriminates against exports from poor Asian countries; the TPP would make things worse, for example, by giving preference to Vietnam’s exports over Cambodia’s. Regional agreements can also undermine the World Trade Organization and the global system that protects smaller, weaker developing countries.

The United States can help ensure that poor countries are not left behind. This brief suggests three policy changes that Congress and President Obama should embrace:

The stated priorities for US trade policy this year are completing the Trans-Pacific Partnership (TPP) and launching the Transatlantic Trade and Investment Partnership with the European Union. These regional trade deals will not necessarily be as problematic as their more outspoken critics contend, but they could make trade and growth even more difficult for excluded poor countries. US trade policy already discriminates against exports from poor Asian countries; the TPP could make things worse by, for example, giving preference to Vietnam’s exports over Cambodia’s. The proliferation of regional agreements also undermines the World Trade Organization (WTO) and the global rule-based trade system that particularly protects smaller, weaker developing countries.

Taking the steps outlined in this brief would allow the United States to regain the leadership role it lost when other rich countries opened their markets to least developed countries (LDCs) as part of the global partnership under the Millennium Development Goals. Currently, the United States is behind even China and India in providing duty-free market access for poor countries. [1] Taking these steps could also revitalize the WTO, which would benefit the US business community, as well as developing countries, and the gains would come at little or no cost to import-competing sectors because LDCs account for less than 1 percent of total US imports.

AGOA, which passed Congress with bipartisan support in 2000, provides eligible countries with duty-free access for everything except sugar, dairy, peanuts, and a few other products. The program did less to diversify African exports than hoped, but it was not a total failure. Petroleum still accounts for more than 90 percent of imports under AGOA, but, as shown in figure 1, clothing exports also increased sharply. Those exports declined when the managed trade system for textiles and apparel expired in 2005, and again when the financial crisis added an unexpected shock. Still, clothing exports in 2012 were 50 percent above where they were before Congress approved AGOA and up by multiples of that in Lesotho and Kenya, which are the principal beneficiaries.

AGOA’s limited trade impact highlights the need to address fundamental competitiveness problems in Africa, but the gains in market access are worth preserving and expanding through two key reforms: 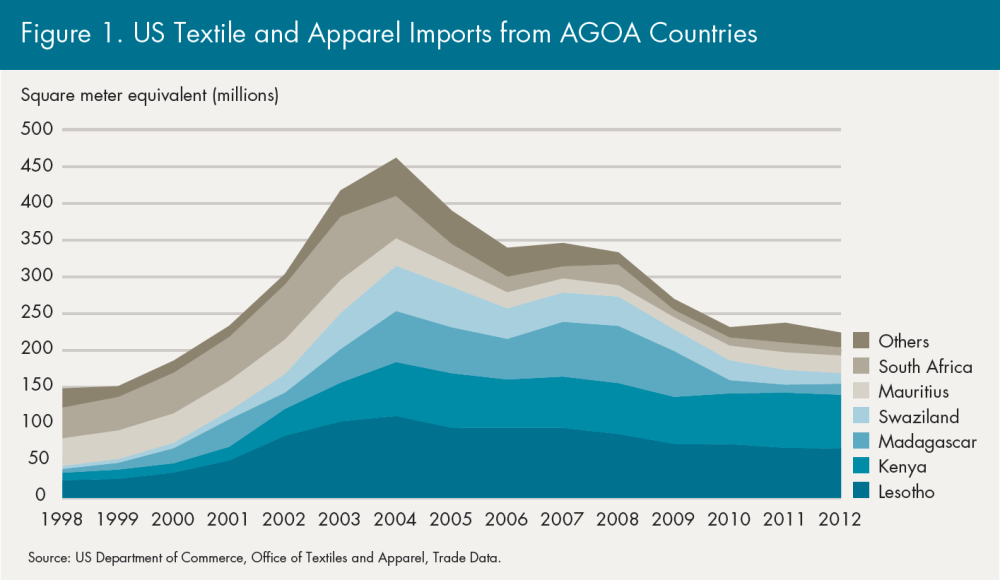 Congress should also work with the Obama administration to pursue innovative capacity-building mechanisms to improve competitiveness in Africa. One strategy is to reorganize existing capacity-building funds that are scattered among a variety of programs and use them to reward countries that are taking steps to strengthen the private sector and improve the investment climate. These funds could provide additional resources to expedite and support reforms in countries that demonstrate a commitment to improving competitiveness. [2]

A second strategy is for donors to help reforming governments underwrite “service guarantees” for businesses. These guarantees would be similar to existing investment risk insurance products provided by the US Overseas Private Insurance Corporation or the World Bank’s International Finance Corporation, but they would be available to local investors as well as foreign. The insurance could cover risks in areas such as customs clearance, licensing, and power supply that are not typically covered. [3] By providing some assurance that reforms will be sustained, these proposals would help draw private investors to Africa while also reassuring donors that their aid dollars are being used effectively.

The United States is rightly praised for AGOA and for giving Haiti preferential access for most of its exports, but there are also extremely poor countries in Asia—including Afghanistan, Bangladesh, Cambodia, Nepal, and Yemen—that are effectively excluded from US preference programs. In 2011, nearly 90 percent of dutiable exports from AGOA countries received preferential treatment while just 1 percent of imports from Asian LDCs did. [4] And the average tariff on the remaining AGOA exports was well under 1 percent, while the average tariff on Asian LDC exports was 15 percent. [5] To put it more starkly, the $450 million in duties collected on imports from Cambodia in 2012 were larger than those collected on imports from either France or the United Kingdom. See figure 2. 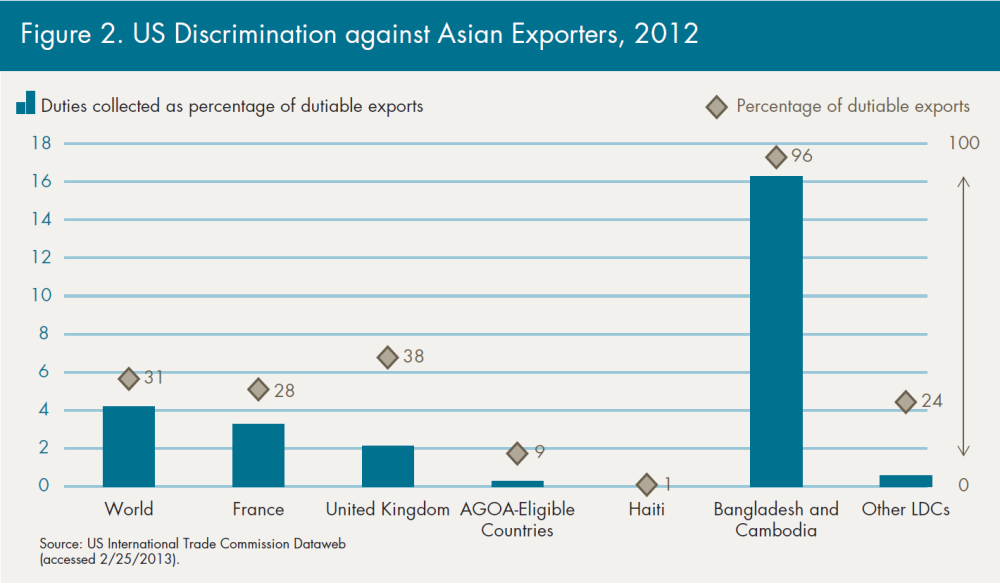 Although there is a broad international consensus that all the UN-designated LDCs should receive duty-free, quota-free (DFQF) market access, US policymakers continue to refuse to consider it. A key reason for this is opposition from AGOA beneficiaries concerned about possible erosion of their preferential access to the US market. But, as shown in figure 1, only Lesotho and Kenya provide substantial clothing exports to the United States under AGOA. They could be shielded from the effects of DFQF market access for all LDCs by exempting just two dozen items from the DFQF initiative for more competitive exporters. [6] These exclusions would also help to address concerns of the US textile industry, though detailed research suggests that the costs to import-competing US firms would be vanishingly small in any case. [7]

Declare a Doha Victory and Move On

A US trade initiative of this sort could help break the logjam and salvage something from the Doha Round of trade negotiations at the WTO. The round is effectively dead, but policymakers do not want to formally admit failure. The ritual promises to keep trying were repeated last summer at the G-20 summit in Los Cabos:

We will continue to work towards concluding the Doha Round negotiations, including outcomes in specific areas where progress is possible, such as trade facilitation, and other issues of concern for least developed countries. [8]

Trade facilitation measures that reduce unnecessary red tape and build the capacity of customs and other trade-related agencies are in everyone’s interest—exporters and importers, rich and poor—and this issue is relatively uncontroversial. The major issue of concern in the Doha Round for the least developed countries is the DFQF initiative. The United States is the only major country that has not moved on it and failure to do so could well doom any chance for a positive outcome at the upcoming ministerial meeting in Bali. A package including trade facilitation, DFQF for LDCs, and perhaps a couple of minor agricultural trade issues would be a far cry from what was envisioned for the Doha Round a decade ago, but it could be enough for members to declare victory and begin the task of revitalizing the WTO.

In sum, congressional approval of duty-free, quota-free market access for the least developed countries would open the door for the United States to “save” the Doha Round, and for everyone to move on to a 21st century agenda. Combined with measures that strengthen AGOA and expand its benefits, this package would be a success for the United States, for African and other poor countries, and for the global trading system as a whole.

See Vijaya Ramachandran, Alan Gelb, and Manju Kedia Shah, “Africa's Private Sector: What's Wrong with the Business Environment and What to Do About It,” CGD Brief (Washington: Center for Global Development, 2009), www.cgdev.org/publication/africas-private-sector-brief.

Most of the rest of the AGOA exports were petroleum products where the tariff is so low that some exporters do not bother to claim the benefit. The average tariff on other LDCs is low because they export mainly agricultural or other commodities that face low duties.

Calculated from the US International Trade Commission Dataweb, http://dataweb.usitc.gov/scripts/user_set.asp.

See Kimberly Ann Elliott, “Breaking the Deadlock on Market Access for the Least Developed Countries,” in The Future and the WTO: Confronting the Challenges,edited by Ricardo Melendez Ortiz, Christophe Bellmann, and Miguel Rodriguez Mendoza (Geneva: International Centre for Trade and Sustainable Development, 2012). One of those relatively competitive exporters would be Bangladesh, which might not be eligible if it does not take steps to protect worker rights; see Kimberly Ann Elliott, “Trade and Worker Rights in Bangladesh: Forget the Twig and Use the Giant Carrot,” blog posted to Views from the Center (CGD) January 13, 2013, www.cgdev.org/blog/trade-and-worker.